A legit-looking pre-release iPhone 7 Plus benchmark seems to confirm what we always suspected: the 5.5-incher finally comes with 3GB RAM on deck.
Published 09 September 2016, 02:27 EDT

What exactly are you paying an extra $120 for (instead of the standard $100) when going the plus-sized iPhone 7 route? Well, there’s the already customary display diagonal gap (5.5 vs. 4.7 inches), a resolution and pixel density advantage, the aggressively advertised dual rear cam setup, and surprise, surprise, an additional gig of RAM.

Okay, maybe that’s not such a big surprise. It’s unusual, seeing as how both the iPhone 6s and 6s Plus pack 2GB random-access memory, but several credible inside sources told us to expect the under-the-hood distinction, precisely because of the fancier, more resource-demanding camera arrangement on the iPhone 7 Plus.

And now, it’s all practically confirmed, courtesy of a pre-release Geekbench benchmark, which looks legit for a change. The “iPhone9,4” tested there the other day runs iOS 10.0.1, relying heavily on two of the A10 Fusion chip’s four cores, clocked at 2.23GHz, as well as 2998MB memory, in squeezing out record-breaking performance results. 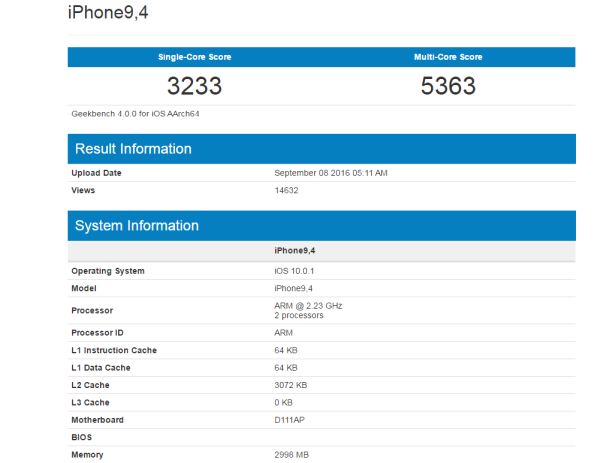 At least as far as Apple gear is concerned, beating even the 4GB RAM-hauling, A9X-powered 12.9-inch iPad Pro. That’s quite the multitasking and processing beast you’re looking at here, no doubt justifying a $769 starting price, despite striking design similarities to the 6s Plus, and irksome 3.5mm headphone jack omission.

Today’s deals come from B&H and Amazon, where you can find the Samsung Galaxy Note 10 Lite, the Galaxy Tab S5e and more devices on sale