The new iPhones are here: Apple launches the iPhone 6S, iPhone 6S Plus

The new iPhones are official: all the details from the iPhone 6S launch (with iPhone 6S Plus).

With new iPad tablets, new Apple Watch options, and a thoroughly overhauled Apple TV, today’s Apple event has already been jam-packed with hardware launches. But we are far from over, and Apple’s been saving its big guns for last. Today on stage, Tim Cook introduced the iPhone 6S and iPhone 6S Plus.

Just like how the Apple Watch got its own new colors earlier today, Apple’s bringing an additional color selection to its smartphone offerings, and both the iPhone 6S and iPhone 6S plus will be available in rose gold. 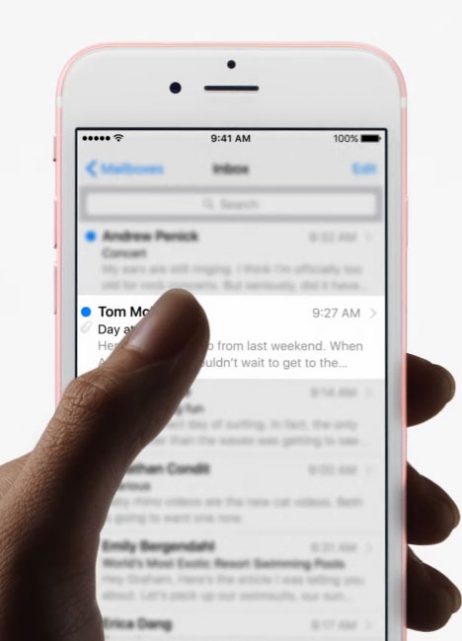 As rumored, the new iPhones pick up the same sort of pressure-sensitive touchscreen tech as the Apple Watch uses, though not with the Force Touch name: for the iPhone 6S, Apple has dubbed its system “3D Touch.” Support for the mode is baked in to apps across the platform, giving users quick access to their info with a firm press – a “peek” feature allows you to dive right in and explore.

Also borrowing from Apple Watch innovations, the iPhone 6S picks up a Taptic Engine of its own, allowing the handset to generate ultra-short tap-feedback events for natural-feeling touch interactions.

Both iPhones run Apple’s new A9 SoC. Compared to the old A8, Apple says we can hope for a 70 percent improvement in processing power, and a staggering 90 percent boost in graphics speed. There’s also an upgraded M9 motion coprocessor, with low-power always-on operation – and this time it’s built right in to the A9.

Fingerprint recognition performance gets a boost with the introduction of a second-gen Touch ID scanner, which should cut scan times in

Apple is finally giving its smartphone cameras a megapixel boost, and the new iPhones score a 12MP iSight camera. We can look forward to faster auto-focus, as well as improved color fidelity with better sub-pixel isolation.

For the first time, the iPhone supports recording 4K video.

The front-facing Face Time camera gets a big upgrade, too, graduating to a 5MP sensor. There’s no dedicated LED flash, but Apple uses software to co-opt the phone’s display as a makeshift lighting source, while matching its color temperature to the scene.

A new Live Photos feature allows users to 3D Touch on a pic to pull up a corresponding video-like clip, animating it with motion and sound. The iPhone 6S is configured to take extra exposures when you snap every pic, generating these Live Photo effects in the process.

The new iPhones pick up LTE-Advance support for high-speed data, while getting compatibility with 23 bands.

We hear once again about Apple’s Move to iOS app, going after Android users thinking about making the transition. Apple is also accepting Android phone recycling in its stores.

Finally, we get to pricing. Basically, nothing’s changed since last year: same storage options, same price points. That means 16GB is back as the base storage level, with the iPhone 6S running just about $650, and the iPhone 6S Plus going for $750. 64GB and 128GB upgrades add $100 and $200 to those prices, respectively. Pre-orders open on September 12, with full sales arriving two weeks later, on September 25.