Although they rolled out in a relatively small number of global markets on Friday, September 28, the iPhone 6s and 6s Plus crushed the family’s previous opening weekend sales records, clocking in at 13 million units, up from 10M last year.

All things considered, it’s really no wonder analyst predictions circle 80 mil shipments by the end of 2015, which would put the 3D Touch-enabled iOS handhelds on the definite path to reaching 200M before they’re upgraded next fall. Maybe even before they welcome an affordable “cousin” to the lineup in the spring.

In case you’re wondering, Australia, Canada, China, France, Germany, Hong Kong, Japan, New Zealand, Singapore, the UK, and the US were all part of the first wave of 6s/6s Plus launches.

Next up, Apple aims to spread the love to more than 40 countries and territories later this month, starting with an impressive expansion to Austria, Belgium, Croatia, Czech Republic, Denmark, Finland, Greece, Hungary, Ireland, Italy, Mexico, Netherlands, Norway, Poland, Portugal, Russia, Spain, Sweden, and Taiwan, to only name a few, on October 9. 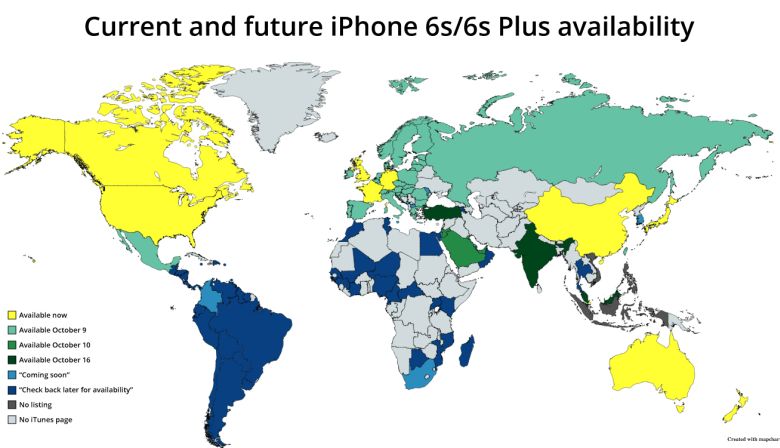 The following day, it’ll be the turn of Bahrain, Jordan, Kuwait, Qatar, Saudi Arabia, and the United Arab Emirates to join the party, while India, Malaysia, and Turkey shall be included in the iPhone 6s world tour on October 16.

The tally will thus be raised to over 50 states already, setting the stage for a total 2015 count of around 130. That’s up from “just” 115 in 2014, and if you’re having trouble visualizing the magnitude of the global release, Cult of Mac graciously shares two convenient, meticulous maps.

What’s striking about them is there are still large uncovered areas. Ukraine, Belarus, Kazakhstan, a big chunk of Africa, not to mention the imposing but rather inhospitable Greenland.

Excited about the new flagships from Samsung? Here is everything you need to know about the Galaxy S21 series smartphones.