Learn more about the possible battery performance of the iPhone 6s and iPhone 6s Plus, as it seems that Apple finally figured it out.
Published 28 September 2015, 16:31 EDT

If you ask any iPhone owner what’s among the biggest complaint they have with their device, we’re certain the list will unanimously include battery life. We’ve seen a ton of cases where users have decided to drift to the larger Plus iPhone, simply because of the better battery life. Those of you worried that this continues to be the problem with the iPhone 6s might be in for some good news though.

We have yet to see an official benchmark for battery performance, which makes sense given the fact that the device has barely been in the market for a few days. Still some preliminary battery life tests claim that even with the 95 mAh that were stripped away from the battery when compared to the iPhone 6, the iPhone 6s provides good performance. The device is said to have clocked 8 hours and 15 minutes during the test period, which was considered impressive for the size of the battery, even when compared to the Sony Xperia Z3 Compact that sports a similar unit. The test conducted claims that the iPhone 6s can even provide 30% more battery life than the iPhone 6, which is definitely a statement to be made, but it seems that this performance is also superior to other flagships like the Galaxy S6 and HTC One M9.

Our full review on the iPhone 6s and iPhone 6s Plus should be live over the next few days. We’ll definitely keep an eye on this feature in particular. 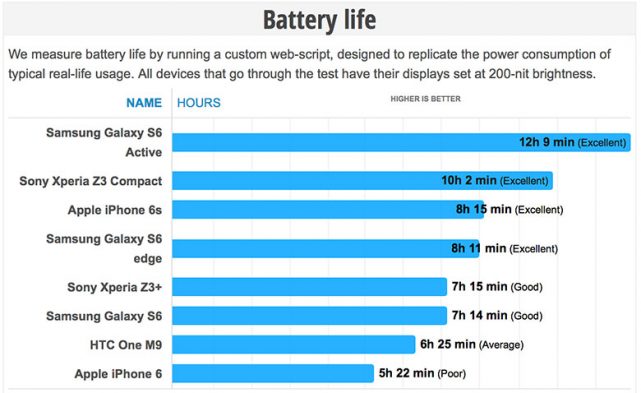