Market research shows the iPhone 6s has got off to a much better sales start than the 6s Plus, while the older iPhone 6 continues to sell rather decently.
Published 05 October 2015, 08:20 EDT

If you’re the least bit familiar with Apple’s sales numbers transparency (or lack thereof), you know it’s no use waiting for an update on the iPhone 6s and 6s Plus box-office scores until January. We already got our opening weekend record confirmation, and that’s really all Cupertino traditionally reveals before the holiday season earnings call.

But where’s the fun in sitting tight for over three months, as the financial results are compiled, when we have market forecasters and surveyors to guide us every step of the way? Some say the new iPhones will eclipse the remarkable popularity of their predecessors, others not so much, while analytics and marketing platform Localytics focuses on the “now” of the equation.

According to data compiled from over 50 million iOS devices on the heels of the 6s and 6s Plus launches, the two pulled off a combined 1.9 percent adoption in the first seven days on store shelves. That’s almost 1 in 50 iPhones in use, which doesn’t sound half bad, but it’s actually not as impressive a start as the 6 and 6 Plus a year back. 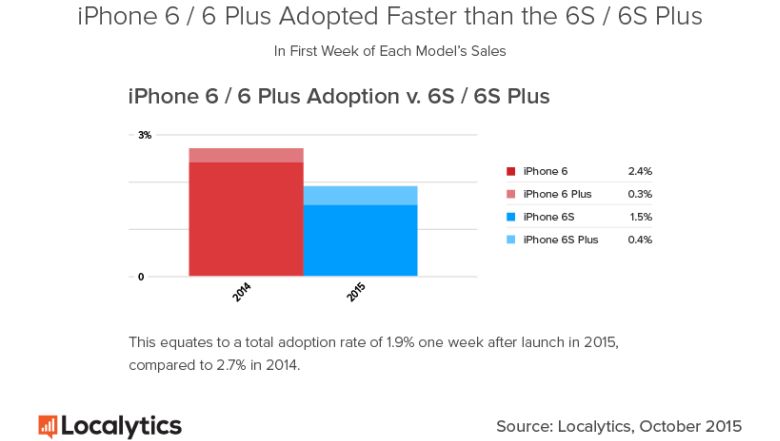 Apparently, the pioneering 4.7 and 5.5-inchers managed to account for 2.7 percent of all iPhones canvassed after a week out. But that’s not to say there’s necessarily a disparity between this report and the 13 million iPhone 6s and 6s Plus sales recently confirmed by Apple.

As the iPhone 6 and 6 Plus crushed every mobile record known to mankind, the number of total iPhones in use grew, and so, 1.9 percent of the much bigger pie today could very well translate in more units than 2.7 in 2014.

Besides, the 6s and 6s Plus have reportedly done wonders for the iPhone 6 adoration, with discounts playing a key part in a boost from 30 percent share a month ago to 33.2. Finally, in case you were wondering which new model is preferred by early adopters, it’s the smaller one. By a landslide.

Namely, the iPhone 6s sits at 1.5 percent in the current ranks, behind the 4, whereas the 6s Plus is also eclipsed by “older iPhone”, at 0.4 percentage points.

In addition to the Galaxy S21 series, Samsung will also launch the noise-cancelling Galaxy Buds Pro earbuds at the Galaxy Unpacked 2021 event.

Samsung says removing the charger and earphones from the retail package is a decision made towards a sustainable future.