Even with Apple’s level of secrecy, it’s hard to denny that all the iPhone 5 rumors showed us that Apple is getting really sloppy at it. We’ve seen the internet flooded with rumors on the iPhone 6, and these have given us a lot of detail on what to expect from both of the smartphones being planned. We’ve debated the possibility of two larger iPhones coming soon, but recent leaks continue to prove that Apple is off to change its own way of doing things.

A Japanese Magazine has just published the probable schematics of both the 4.7-inch and the 5.5-inch iPhone 6 models that are being rumored. Sadly the image is of very poor resolution, so it’s hard to give you more details aside from the confirmation that all the recent rumors keep gaining traction. The 4.7-inch iPhone seems to resemble just a bigger version of the iPhone 5s, while the 5.5-inch phablet resembles the curved back of the iPhone 5c, as we heard recently.

Sadly with rumors of the iPhone 6 being launched until September, it’s hard to know exactly when we’ll be able to confirm this, but we do know that a lot of you are on the edge of your seats waiting. 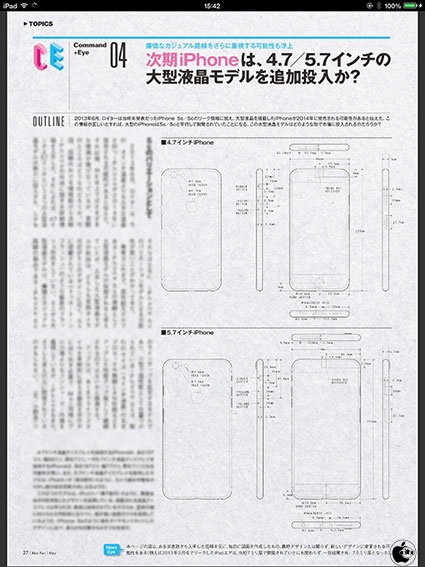