iPhone 5s considered the most popular phone for Q1 2014

Learn more about the estimates provided by ABI Research, which consider the iPhone 5s to be the most popular smartphone in the world.
Published 08 July 2014, 14:35 EDT

It’s hard to deny that every iPhone ever launched has gained a significant level of popularity. Apple may not sell most of the smartphones in the world, but with the amount of iPhones seen in the public these days, it’s clear that Apple has a significant lead. If you’re interested in seeing just how popular a device like the iPhone 5s is today, the numbers are in.

ABI Research has just published its report for Q1 2014, and the firm is declaring the iPhone 5s as the most popular smartphone in the world for that quarter. Sadly the details as to how this ranking was determined are hard to find, but it’s a list of 20 different smartphones, and believe it or not, even devices like the Samsung Galaxy S III and the old iPhone 4s have also made the list. According to the company’s statement:

“The presence of the Samsung Galaxy S3 i9300 16GB and iPhone 4s 8GB in the top five is testament to the enduring appeal of these models and the vendors strong brand, enabling a long and profitable lifecycle, that other vendors can only dream of,” said Nick Spencer, ABI’s director for mobile devices.

Just keep in mind that these numbers focus on Q1 2014, a time when devices like the Samsung Galaxy S5 and the HTC One M8 were still gaining traction. 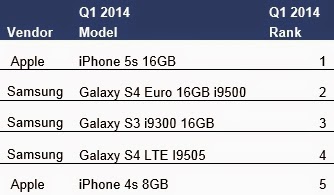 VIVO is only bringing the vanilla X50 and the X50 Pro to the Indian market, and not the flagship X50 Pro+ that is powered by the Snapdragon 865 chip.