iPhone 11 review: the right amount of EVERYTHING?!

Five years ago, Apple launched the iPhone 5C and it bombed. Many speculated as to why, but my reasons to not even touch it for review is because it was just $100 less expensive than the iPhone 5S, had dated specs, and did not bring the new Touch ID.

It wasn’t until the iPhone 8 and iPhone X that Apple tried again, and this time the approach made more sense. Prices varied significantly, materials varied, but even if you weren’t getting a watered down iPhone with the 8, their designs differences made the X more popular.

This is why the iPhone XR experiment was so important. Bring a similar design, good enough specs and hardware, and then make it better in essentials like the battery life. It was the world’s favorite iPhone of 2018, but it was still not aggressive enough to bring Apple back to its sales glory.

So, how was the aggressive part addressed? Well, this is the iPhone 11. A device priced lower than even the XR, and what Apple calls “Just the right amount of everything.”

Right now reports have this as Apple’s best-selling iPhone, but it has certain elements that make even mid-rangers seem more advanced. So the question is if you’re getting a good enough iPhone for the price. We’ll try to answer that in our iPhone 11 review.

At a time when even the Google Pixel 3a has a better display for $200 less, it’s hard to look at the iPhone 11 and say that you’re getting your money’s worth. But notice how I started this review. I said – are you getting a good enough iPhone, and I said it for a reason. See, iPhone customers are not shopping for Pixel. Most of them still want an iPhone, so that’s how we’re going to focus this review.

Let me start this video by telling you what I like about this phone and it actually starts with most of the hardware elements. I’ve spent years wanting a Product Red iPhone, and iPhone 11 is the only way to get one. And sure, there are lots of other colors to choose from, but the black screen matched with the red aluminum band, plus the red glass and the frosted finish in the camera hump along with the flashy camera rings looks kind of hot if you ask me. I’ve been using it with this tan leather case from Mujjo, and man, I love how it looks and feels.

Like the iPhone XR, the 11 is also a chunky phone, which I don’t mind because of the second reason I like this phone. See, I don’t care about thin and light works of art that die half way through the day. Phones have evolved into the tools we need every day, all day, and this is the first time I’ve been truly satisfied with an iPhone’s battery life. This phone can go for a day on a charge, and still have enough juice to last through a good deal of the next one. Now, not all of the sacrifices made to achieve this are things I like, so stay tuned for the cons.

The third thing I like is seriously, the cameras. If dual cameras is all you get, this is the right combo for me, now with a standard camera and an ultra-wide. Don’t get me wrong, I like telephoto for street photography, but I find wide-angle to be more useful. 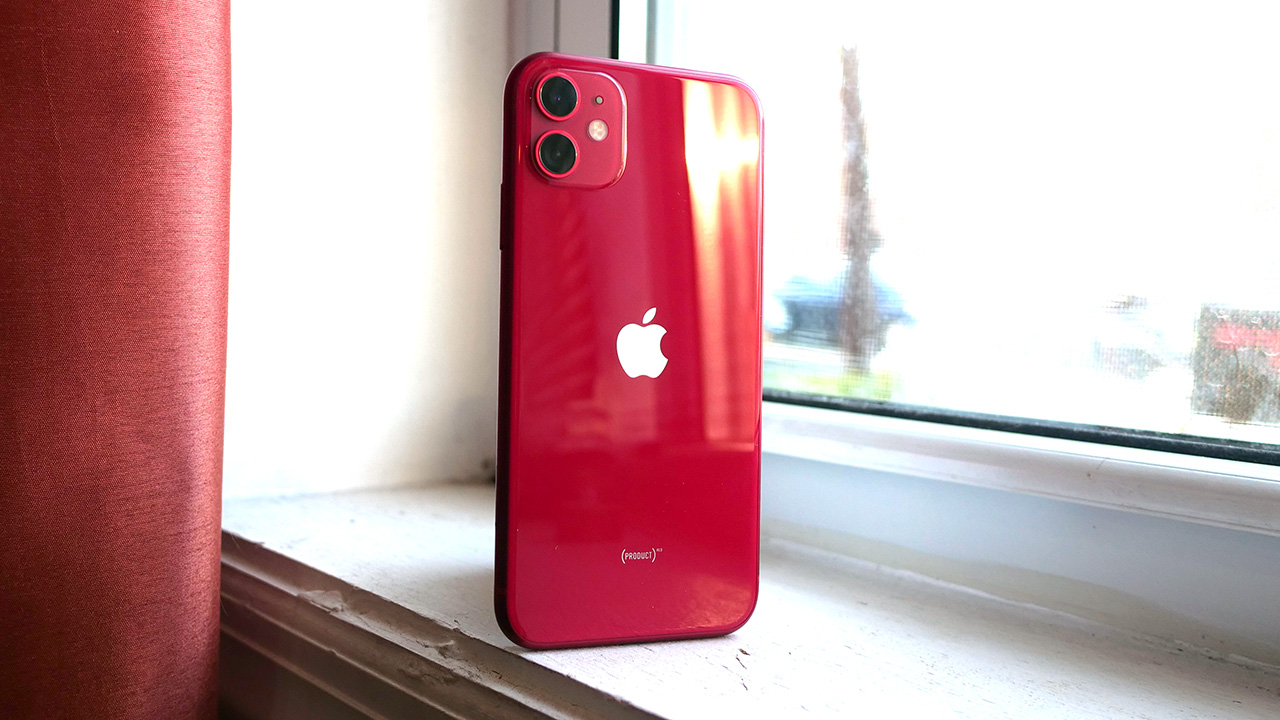 But really, the lenses are just part of the story. Apple has been really killing it with their smart HDR. The iPhone XR was good, but the 11 just blows it out of the water. Colors are on point, not too saturated in case you want to edit in post, and with levels of detail that I’ve never seen come from an iPhone, all while not being over-sharpened. And then the dynamic range of everything around it is so well balanced, not darkening the photo if I locked exposure on a bright subject.

Low light is the true Achille’s heel of any phone at this price range, and yet the iPhone 11 has two of the same cameras as the Pro. Night mode is here, and I like that you can select the speed of the shutter to get more dramatic effects if you can hold still. Really the only thing I wish was a dial selection for it, as you depend on Apple detecting that you need the feature for it to pop up. Also, it doesn’t work with the ultrawide which is a true bummer.

Portrait photos are also kind of insane thanks to the detail. Not too overdone to make you look old, and not soft at all. Well balanced is my best way to describe them, even if hair can sometimes be a problem.

It’s actually the same way I feel about Selfie portraits. Skin tones look more natural. It just doesn’t seem overdone, which I like even in dark scenarios. 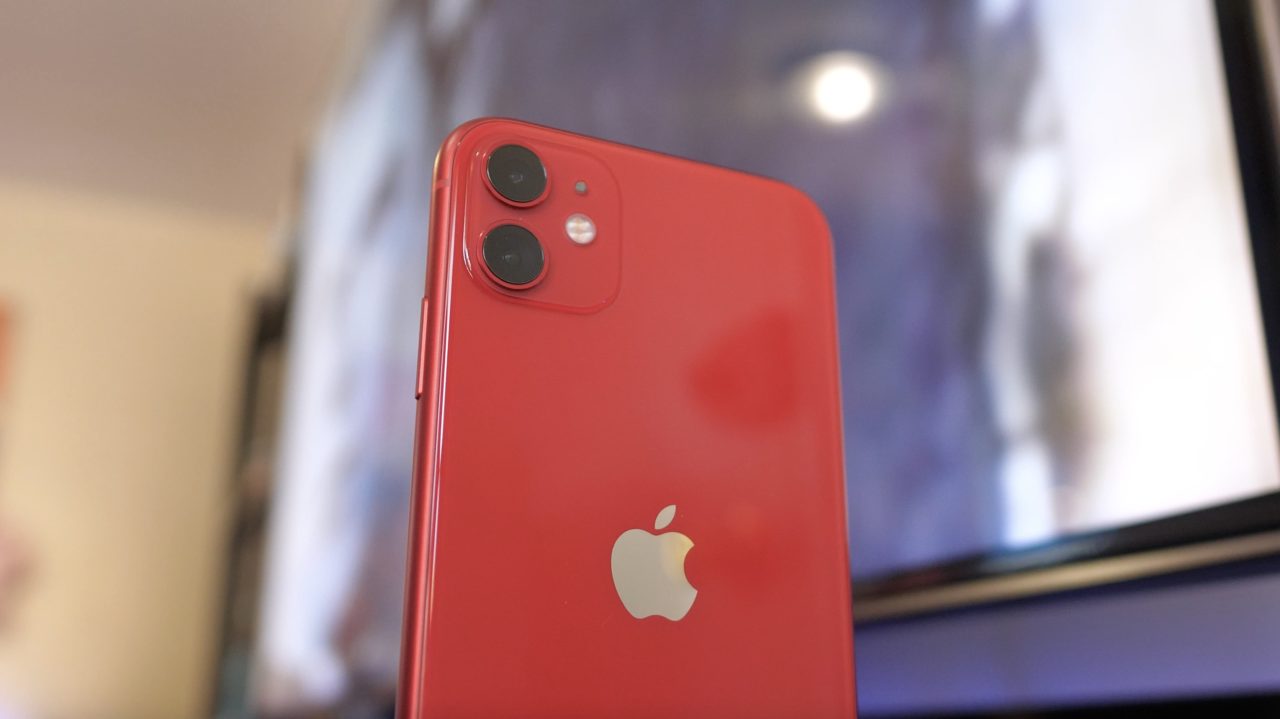 And then there’s the case for video where if you’re looking for a VLOGGING phone, or even just the best phone for taking videos of your kids and family, this is it. Selfie 4K even at a crazy 60fps, which no other phone can do, and very few cameras bellow $1500 can do. That said, stabilization on the selfie camera is not as good as the standard, where that looks full Morticia Adams. You don’t even need a gimbal for this phone, at all. And honestly, the story of video for me is not about what this phone can do, but how well it does it. The codec seems more polished than Android counterparts with no warping or over sharpening. Even low light this video is honestly the best I’ve seen this year from a phone.

Probably one of my favorite thing about buying into an iPhone, is everything Apple brings to its ecosystem. Apple Watch Series 5 is my favorite smartwatch right now, which only works with an iPhone. The simplicity of being able to share files quickly with my Mac or iPad is still second to none. Even simple apps like FaceTime and iMessage haven’t found a match from Google, even if Android has found good alternatives from other companies. Even if you’re buying the less expensive iPhone, the experience from an ecosystem perspective is not watered down at all. 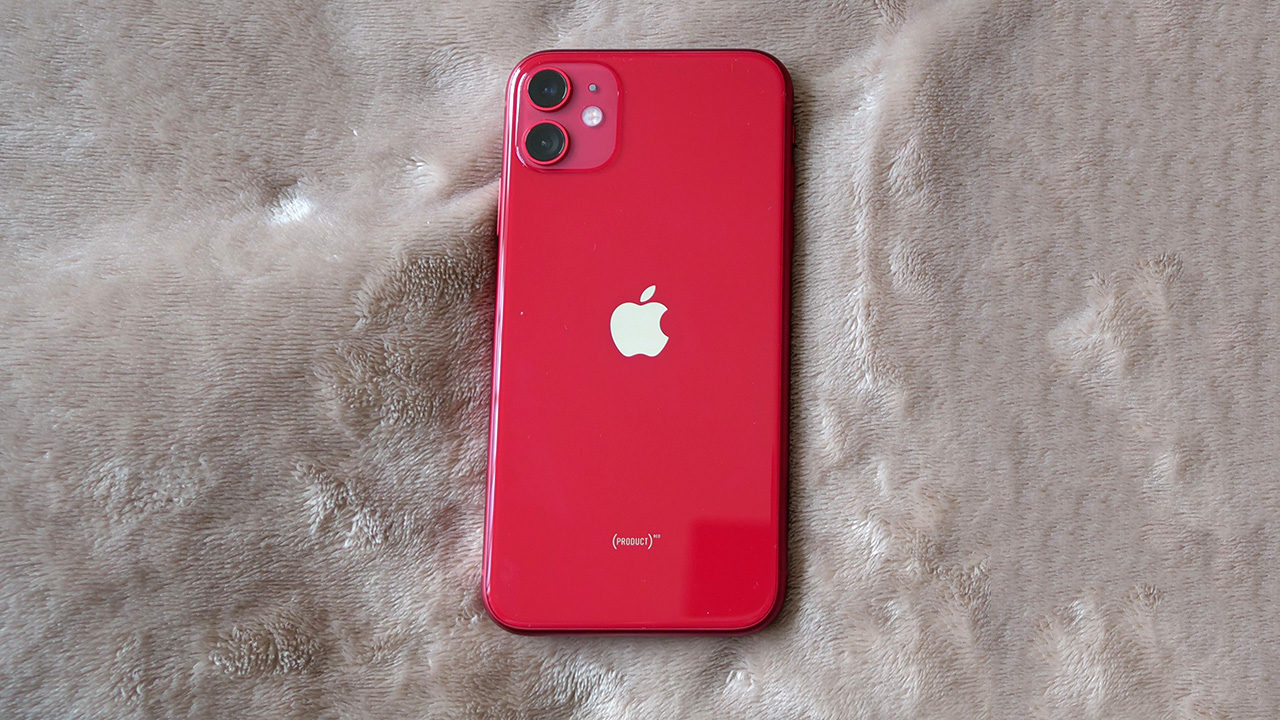 Now, like in the case of most, the iPhone 11 is not a perfect phone. If we were to list the things I’m mixed about, let’s start with this display. I promised I’d get back to the sacrifices for battery endurance in our iPhone 11 review, and this is it.

Apple’s 6.1 Liquid Retina does have a couple of things that I like. If there’s one thing Cupertino knows how to do is calibrate a display, and those of you looking for accurate color for those Instagram edits, this screen gets that right. Sadly you do have the typical limitations of an LCD, which is that blacks are not well represented given the need to light up that portion of the display. And honestly, I don’t have a problem with that since most computers, TVs and even my favorite iPad use this technology. My problem is really Apple’s choice for resolution at this price. At some weird form of 828p, you’d have to go real cheap on Android phones in 2019 to find this pixel density.

And then there’s the case with how iOS 13 looks on it. One of its major selling points is Dark Mode, and yet, I wouldn’t recommend it on this LCD like at all. It’s also been quite buggy since its launch, with me having issues even with Face ID working until I reset the phone, so I’m hoping Apple Irons that out.

I partially feel the same way about the internals. I find 64 gigs of storage to be such a rip-off in 2019 for $699. Apps and games have gotten far more demanding. That said, Apple addresses the needs of the most demanding user with everything else. The A13 Bionic is one of the most powerful chips of the year. This phone knows no stutters, and I feel the same way about essentials like the battery size, RAM, IP68 rating and wireless charging. 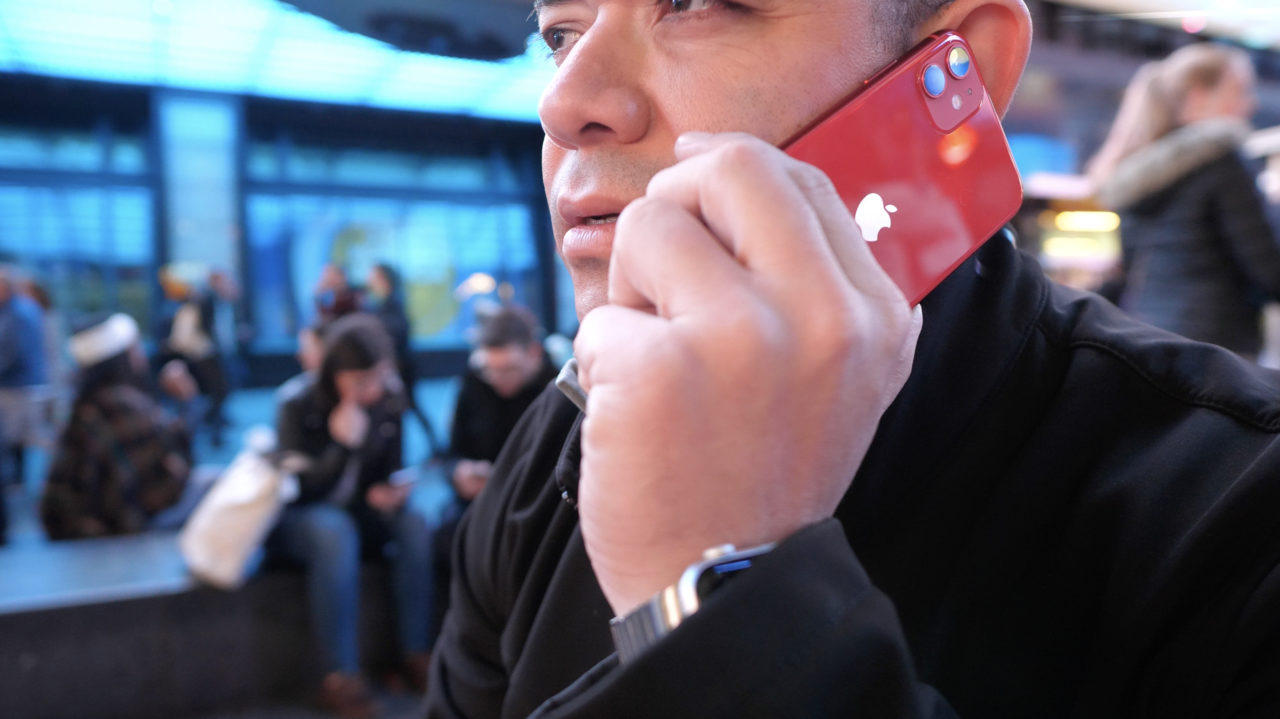 Want to know the irony? That all this power doesn’t seem to be harnessed by the simplicity of iOS 13.  I know not all of you like this dated grid of icons. I join you in that sentiment.

I wish iOS was more modular about allowing me to make my home screen whatever I want, but I do understand that this level of simplicity is what a lot of people prefer.

There really wasn’t that much of a change with iOS 13, except with improvements under the hood. Apps are said to launch faster, but I can’t really tell. Swipe functionality finally reaches the keyboard, but that’s not truly something I’d call new even for iOS. And sure, Photos, reminders, and notes got some silent improvements, but nothing that I’d really call major. And yeah I heard of slow-fies.. Didn’t use them, don’t care, but you might get some epic Instagram stories out of them.

About the only thing I do like about iOS 13 on an iPhone 11 is something the small Pro can’t do, which is go on landscape on certain apps, but then that’s about it.

But then here are the things in our iPhone 11 review that I flat-out don’t like about this phone.

See, with all the video capabilities of this phone, it’s rather unfortunate that it’s missing an important element to become a true VLOGING tool. The headphone jack for me is not just about being able to connect better headphones, but about being able to use a good directional microphone. And sure, there are a few lightning solutions out there that you can consider, but which are less than ideal with certain gimbals.

And last but not least, is this little 5W charger that comes in the box. Dear Apple, at a time when even the Pixel 3a ships with a faster USB C charger for $399, like seriously, what’s your excuse? A battery this large needs a better charger than what you’ve been bundling since the days of the iPhone 3GS. 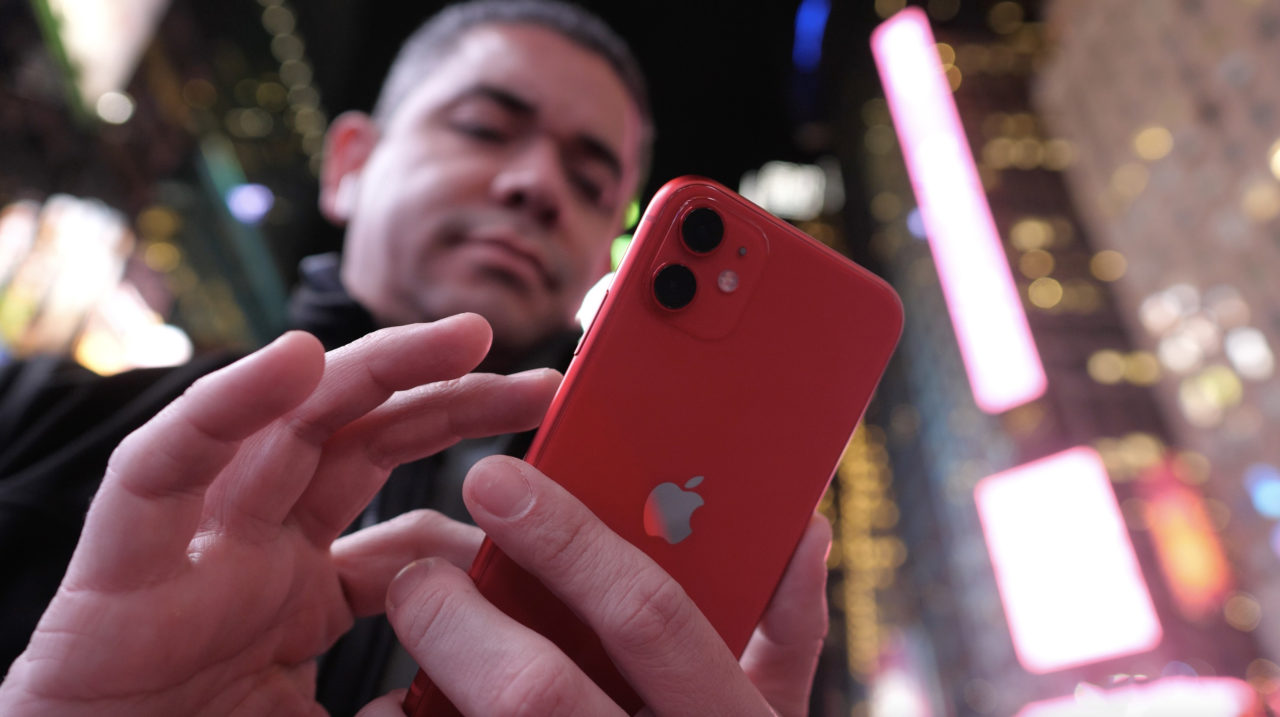 To conclude our iPhone 11 review, I think it’s important to go back to that initial slogan that Apple has for this phone: “Just the right amount of everything,” which pretty much claims that this phone is everything you need.

And the question is, is it?

See, this is no iPhone 11 Pro. The display is not as great, and you’re not getting a telephoto camera.. But if you think about it, that’s it. You get better battery life than on the small 11 Pro, and I feel those two features missing are not worth $300.

Bottom line of our iPhone 11 review, this is the iPhone I recommend to everyone right now. I do feel it’s got the right amount of everything. I’d say that it’s worth giving this a try first, and if you’re not happy, then return it and try the Pro.

Obviously we have to pick one for the best iPhone 13, but that’s harder than it sounds. Check out our in-depth comparison of iPhone 13 models.