Both these phones claim to be the best at something, but there’s really only one way to find out if they truly are. This is iPhone 11 Pro vs Pixel 4.
Published 23 October 2019, 19:00 EDT

The last time we compared products made by Apple and Google, it was iPhone X vs Pixel 2 XL. At the time both were my perfect Daily Driver combo but neither was perfect. One had the most futuristic design of the year, and filmed some great video, the other had more of a dated design, but the best camera of the year, and was invaluable to me because of Google Fi, which was still exclusive to Google Phones.

And then things shifted in 2018. On one hand Apple’s choice to iterate was completely uninspired and conservative, and the Google Pixel 3 was a step in the right direction from a materials perspective, and yet a huge step back when it came to design. I really wanted to love them, but I honestly ended up ignoring them most of the time.

This year the story is kind of different. These are two phones competing in the same category, with very different approaches. On one corner we have the iPhone 11 Pro, Apple’s latest and greatest, what Apple calls, Pro cameras, Pro display, Pro performance. On the other we have the Google Pixel 4, what the company simply dubs – The Google Phone, period.

Right now both these phones claim to be the best at something, but there’s really only one way to find out if they truly are.

Apple and Google had a very similar way to approach the market. Each considers itself a software company first, so originally their products were designed as more of a showcase that would blend into the background. That’s NOT the case any more. Each company has become more unapologetic about aesthetics, and yet, these phones could not be more different.

When staking them side by side, their footprint is very similar. The Pixel is 3mm taller and a hair thicker, but then the iPhone is 2mm thicker and a whopping 26 grams heavier. Apple’s stainless steel is heavier than Google’s choice for aluminum, but that’s not the only thing at play here.

This is the first time I ever compare an Android that’s designed to compete with a specific iPhone, and does so with a smaller battery. Apple finally caved in on the thin-and-light soap opera and gave us a 13% larger battery, now at 3,046mAh, while Google shaved 4% to a meager 2,800mAh.

Can you tell? Well neither is designed to be a battery king, each barely ends the day on a charge, and yet I do trust the iPhone to survive a tad longer than the Pixel. I really don’t know what Google was thinking there. 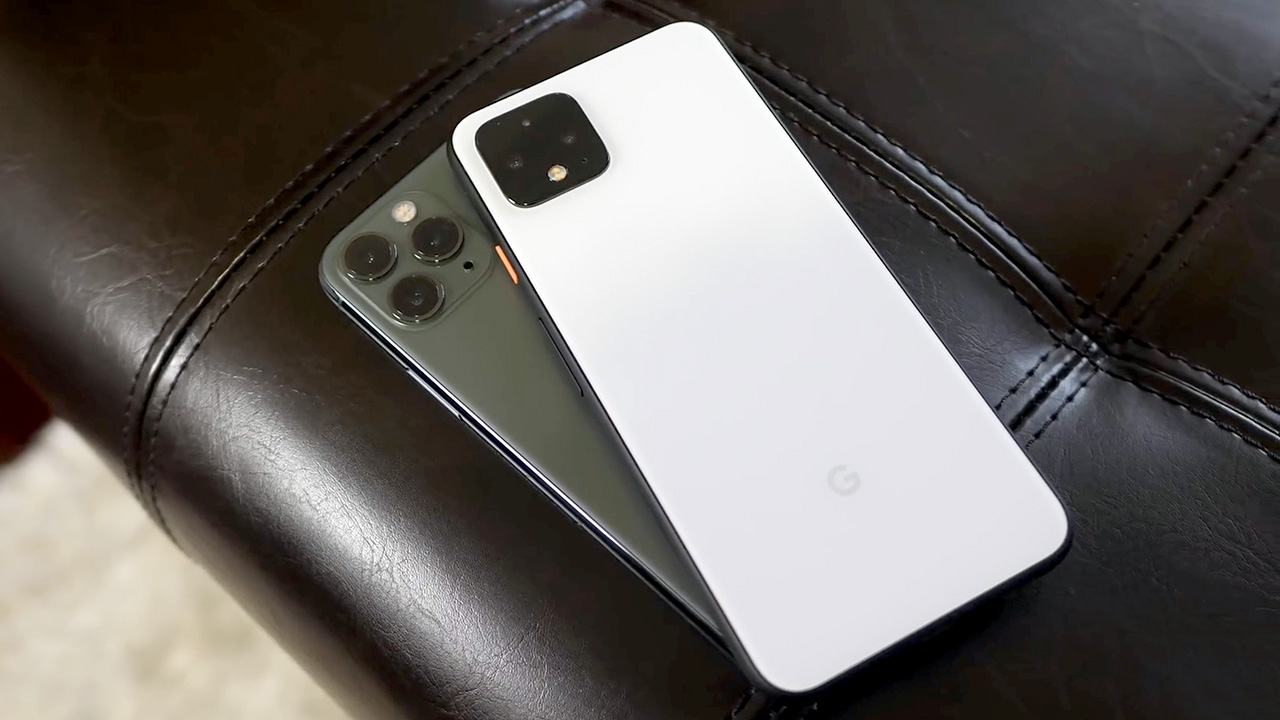 And let’s throw in the rest of the numbers since we’re already here. It’s not really worth it to compare RAM or processors, but it’s important to note that the 11 Pro is rocking Apple’s latest and greatest chip, while Google is NOT rocking Qualcomm’s most advanced processor. Both start at the same amount of storage, non expandable, but the iPhone can be purchased for far more than 128 gigs. Each are IP68 rated, support wireless charging, include 18W chargers in the box, support the latest Bluetooth, though only the iPhone supports the latest Wi-Fi, and includes earbuds when you purchase, though neither has a headphone jack, even if both have loud stereo speakers.

And then there’s the story of their displays. Apple calls it a Super Retina XDR, and I’m just happy Google finally made this comparison fair. Both are OLED technology, with Apple’s being a hair larger at 5.8-inches vs 5.7, and with a meager extra pixel density at 458 vs 444 PPI. Apple also supports more standards like Dolby Vision and HDR10, but Google is no slouch. We have an always-on display that I find incredibly useful, and 90Hz refresh rate without sacrificing brightness. To sum it up, both devices have great displays, but I’m gonna have to give this one to Apple, mainly because of its crazy 2 million to 1 contrast ratio vs 100 thousand. Yes, you can totally tell in the colors and detail, even if again, the Pixel’s display is also great in its own way. 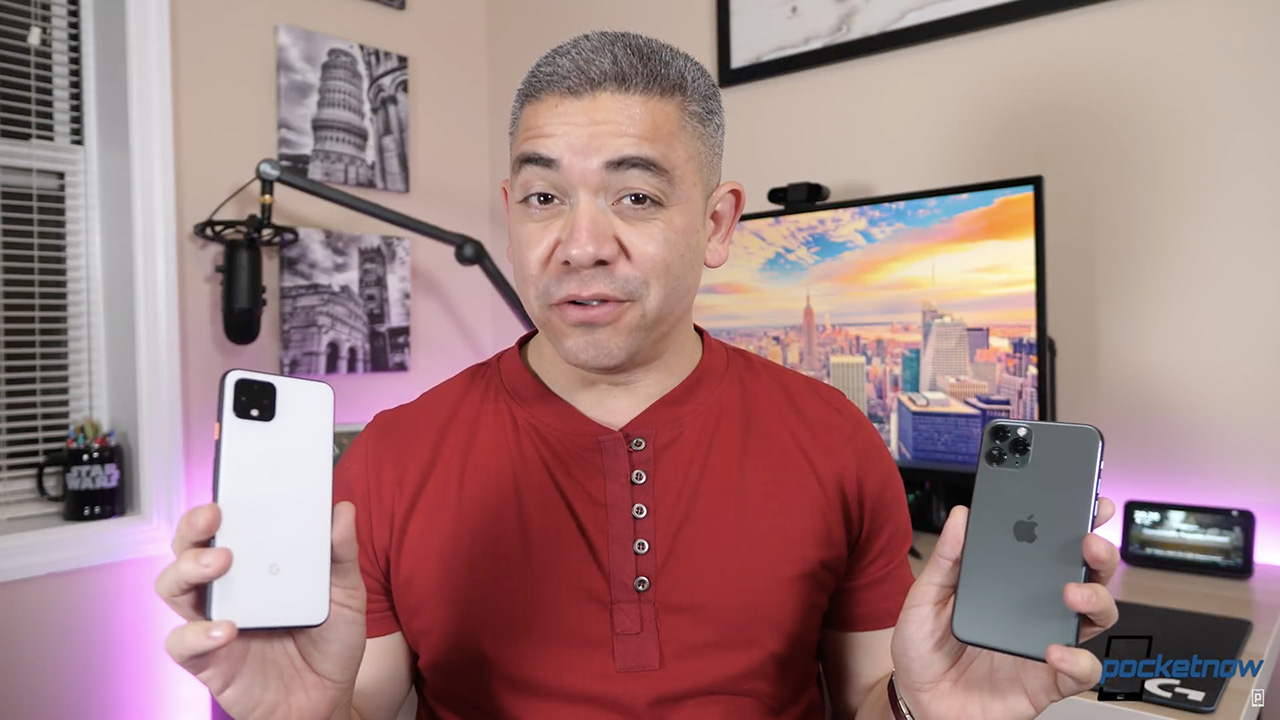 This is Apple’s third year with Face ID on the notch, which is already quite proven to work well. The Pixel decided to join with its own Facial recognition assisted by a similar NIR flood emitter, dot projector, 2 NIR cameras and even a freaking radar, though all so well hidden that you can barely see it on the asymmetrical bezel. Both feel just as fast, and with a little tweaking in the settings you can set the Pixel to only show notifications on the lock screen when it detects your face, pretty much like the iPhone. The huge problem? Well only the iPhone has the option to only work when your eyes are open. The Pixel sadly can work even with your eyes closed… so beware.

Overall, what can I say, Google came as a close second to every single hardware element. This is definitely Apple’s territory.

I never like to make comparisons about iOS or Android, since each approach is dramatically different. I won’t call one better than the other, but this is another scenario where the comparison is fair. If you buy into an iPhone you get the latest and greatest software for years, and the same happens with a Google Pixel.

iOS 13 is Apple’s least inspired update ever. Sure you get a dark mode, finally, and you can now swipe on the keyboard, finally. And there are some minor improvements within Apple apps, but there’s really nothing special about what you’re getting. It’s there for those of you looking for simplicity, but that’s about it. 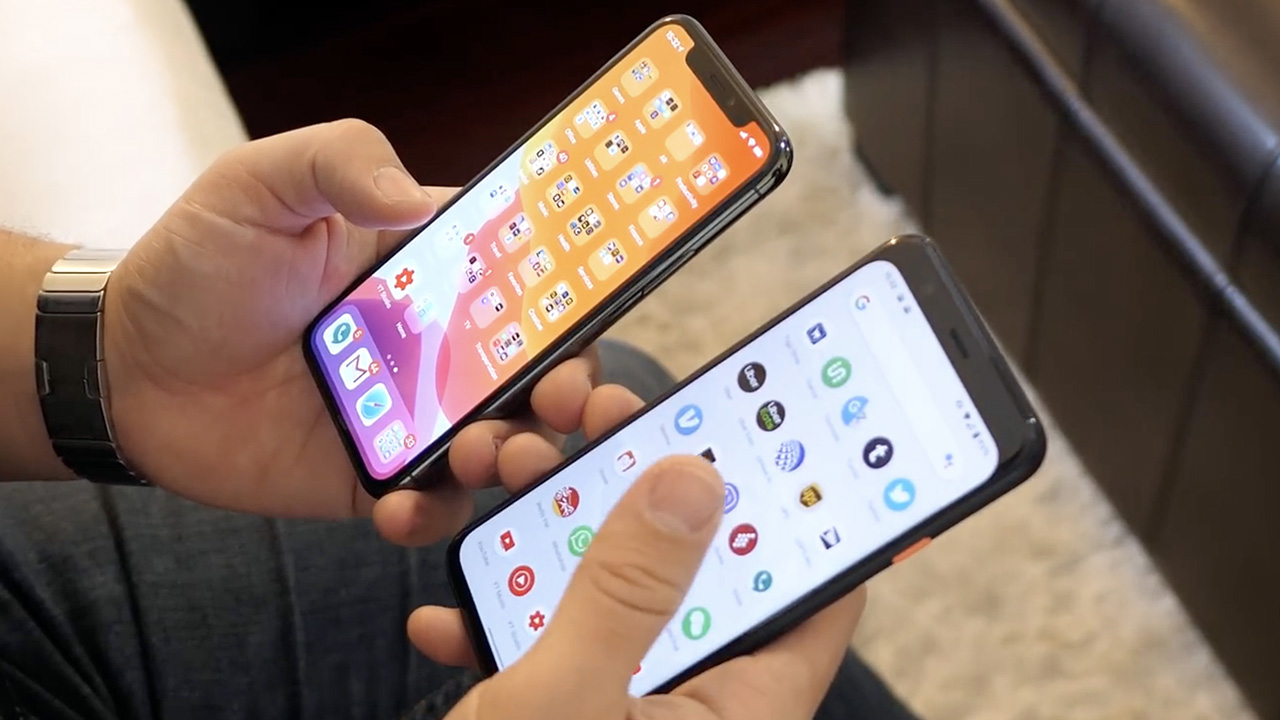 And don’t even get me started about digital assistants. I’d say the Google Assistant would fire Siri as its assistant on day one. There’s just no room for comparison in how far Google has come when compared to Siri.

One thing that’s rather similar with each of these phones is the overall experience. While many manufacturers go above and beyond with features and gimmicks that are cumbersome to use, Apple and Google feel more mature and simplistic. They feel like tools in every day use that are practical and speedy. Move around their launchers or launch your favorite game and each device feels like it can hold its own.

Phone calls are good on both, and even if Google Fi is now supported by an iPhone, you can only get all the features on a Google Phone. 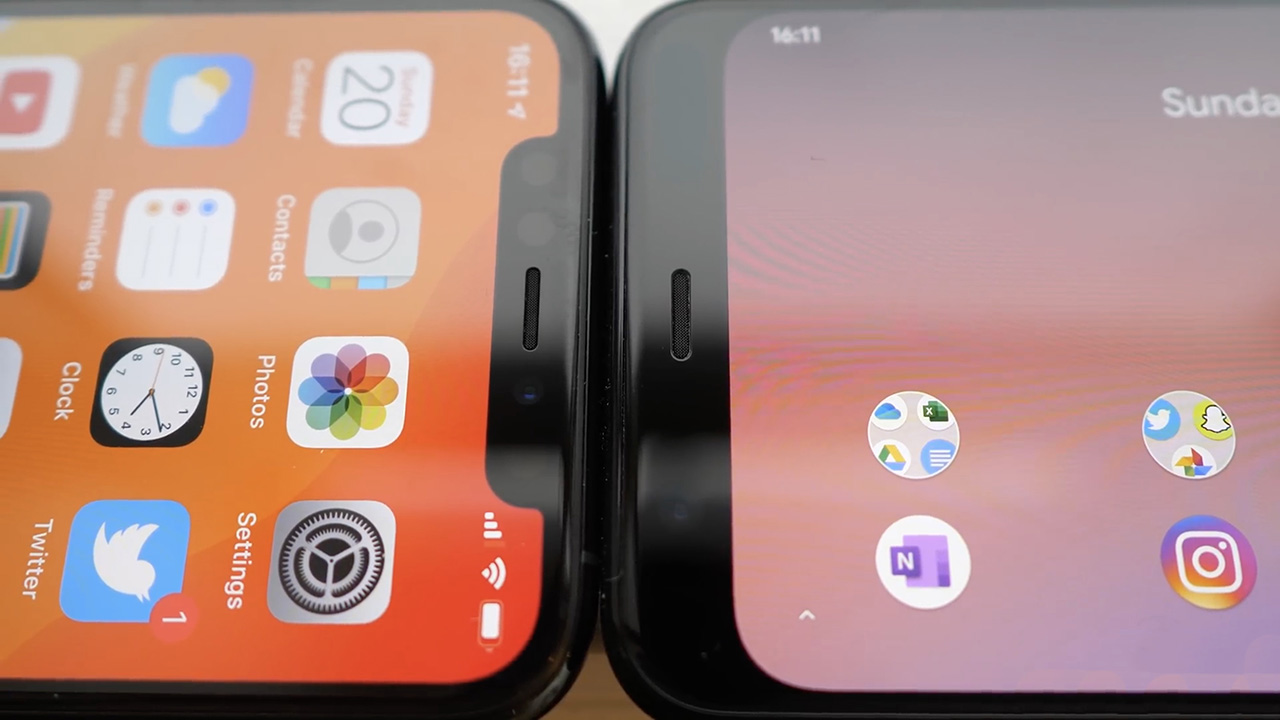 But alright, let’s get to the meat of this comparison and determine which phone has the best camera. Apple has now joined the triple camera wagon, while Google is around four years late to dual cameras. Apple doesn’t have to deal with the polarizing opinions between what secondary camera is better, while Google got a lot of criticism over going telephoto instead of wide.

The reason why that doesn’t make sense is because you can’t use software to simulate a wide, and yet Google has been killing it with their zoom compensation through software. Apple on the other hand, does have the versatility of three focal lengths, so it owns versatility. But in Google’s defense the loss of detail is noticeable when zooming beyond optical capabilities, while the Pixel doesn’t even show you 2X in the view finder with the idea of just inviting you to keep going, and it does deliver better zoom photos through optics and software. 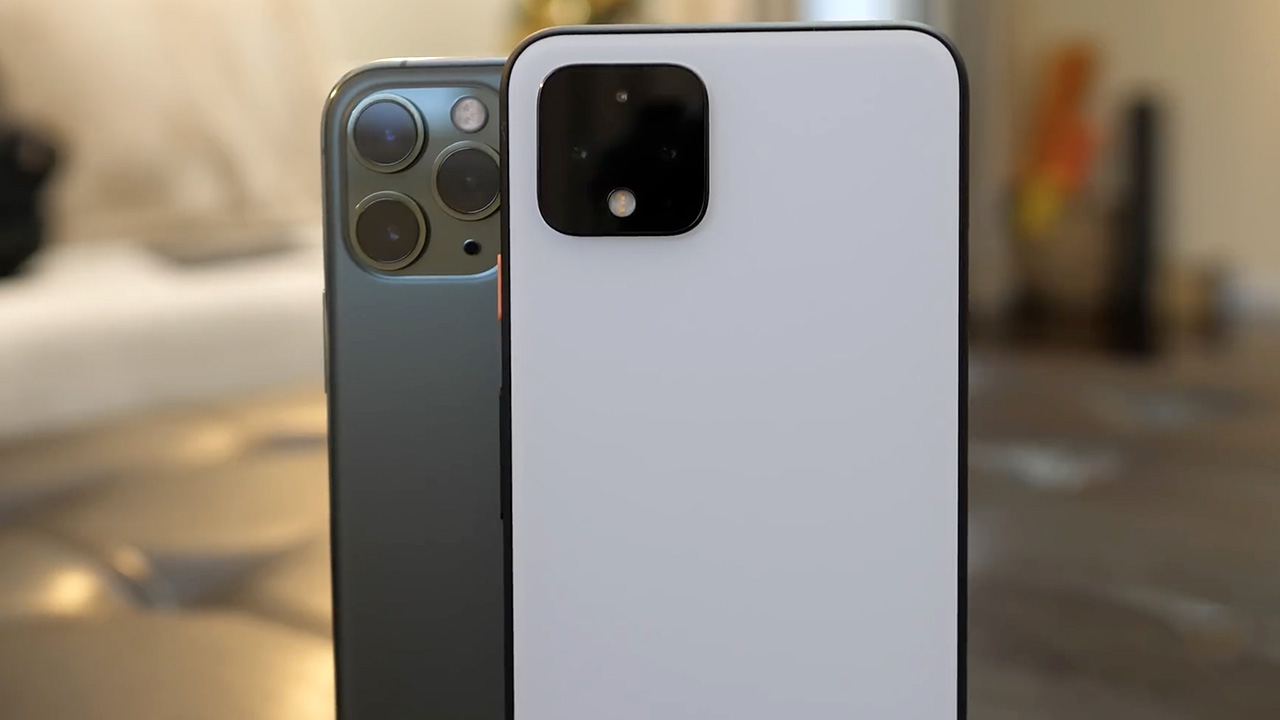 This is more noticeable in Low Light. Both devices have their own night mode, but the iPhone completely falls apart if you had to zoom on a city skyline, while the Pixel holds its own to provide significantly more detail. That said, in Apple’s defense, when not zooming in, notice how the iPhone pulls out the skies with significantly less grain than the Pixel. Apple’s night mode seems to leap over Google’s Night Sight, but not in every scenario as it doesn’t work with the wide angle.

As for standard photos, A pixel is a pixel, but boy has Apple worked hard on improving this. There are cases where I notice better dynamic range from the iPhone, but the cases are rare. If anything I’d say that Apple finally caught up to Google in this department.

As for portraits, It’s hard to call a winner. They both do skin tones really well, and they both struggle with hair to a certain degree. I prefer the fact that Apple has more modes and options, and doesn’t require you to step back like the Pixel 4 does now. Still, the Pixel gives me both shots for every portrait, where with Apple it’s all or nothing.

As for selfie portraits, I’m going to side with the iPhone. Both devices provide an insane amount of detail, but the Pixel seems so sharpened at times that I look far older than I am in certain cases, while the iPhone achieves this without overdoing skin tones. And yet, if it were up to me in low-light selfies and portraits, the Pixel wins given its night sight support. 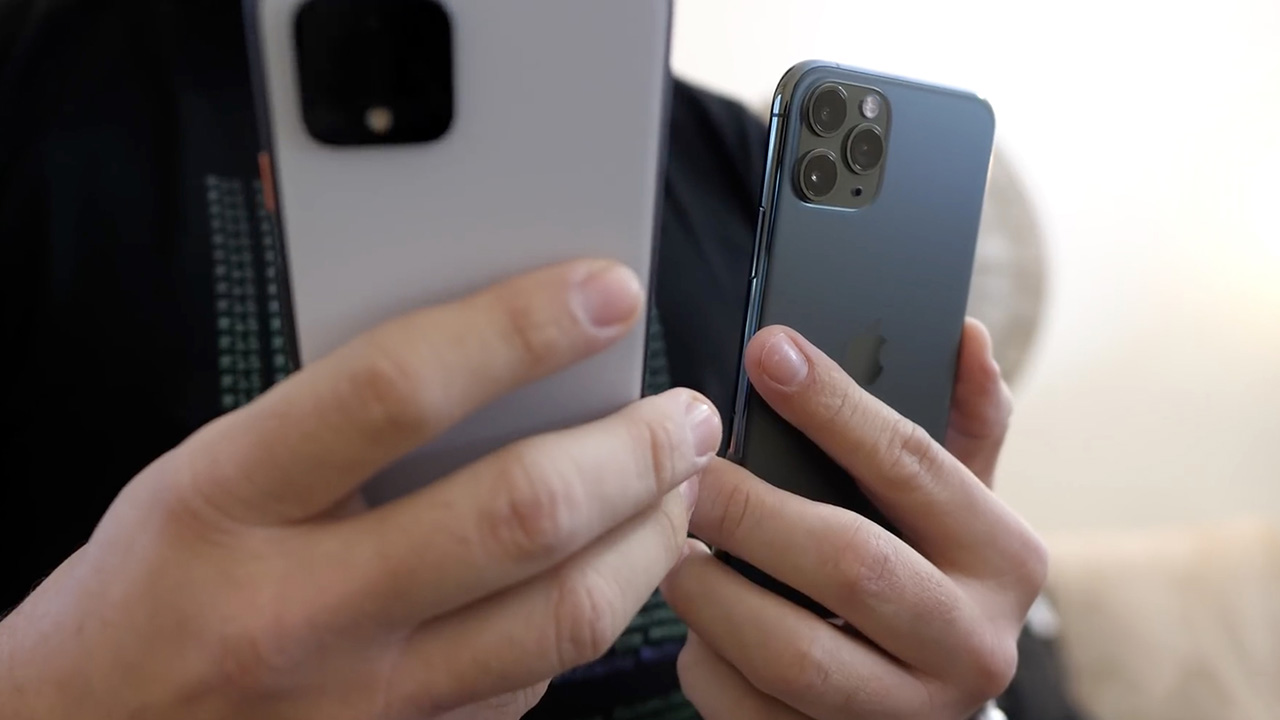 And once we jump into video, I hate to break it to you, but the iPhone really makes the Pixel look bad, starting with the capabilities. 4K at 60 from the primary shooter vs 4K at 30, and only the iPhone has the ability to change camera modes while you film. Sure stabilization is good on both, but if I were to show you these two low light videos, which were recorded separately, and man, the Pixel just does not hold its own.

And the same goes for selfie video where the iPhone can go all the way to 4K at 60, with some decent stabilization, while the Pixel is still capped at 1080p, even with all the hardware capabilities. This just feels like such an unfair comparison.

To conclude, let’s try to sum up which owns which. The iPhone owns Hardware, the Pixel owns software, while the experience is a tie, and then photography is at times owned by the iPhone, with the Pixel trailing close, and with video just tilting the scale completely towards Apple.

The last time I did this comparison the Pixel 2 XL won by a long shot, but it seems that Apple has caught up and won over the last two generations. Obviously, Apple has no excuse, though, as the iPhone 11 Pro is $200 more expensive than the Pixel 4. It should be a better phone for its dramatic price difference, regardless. 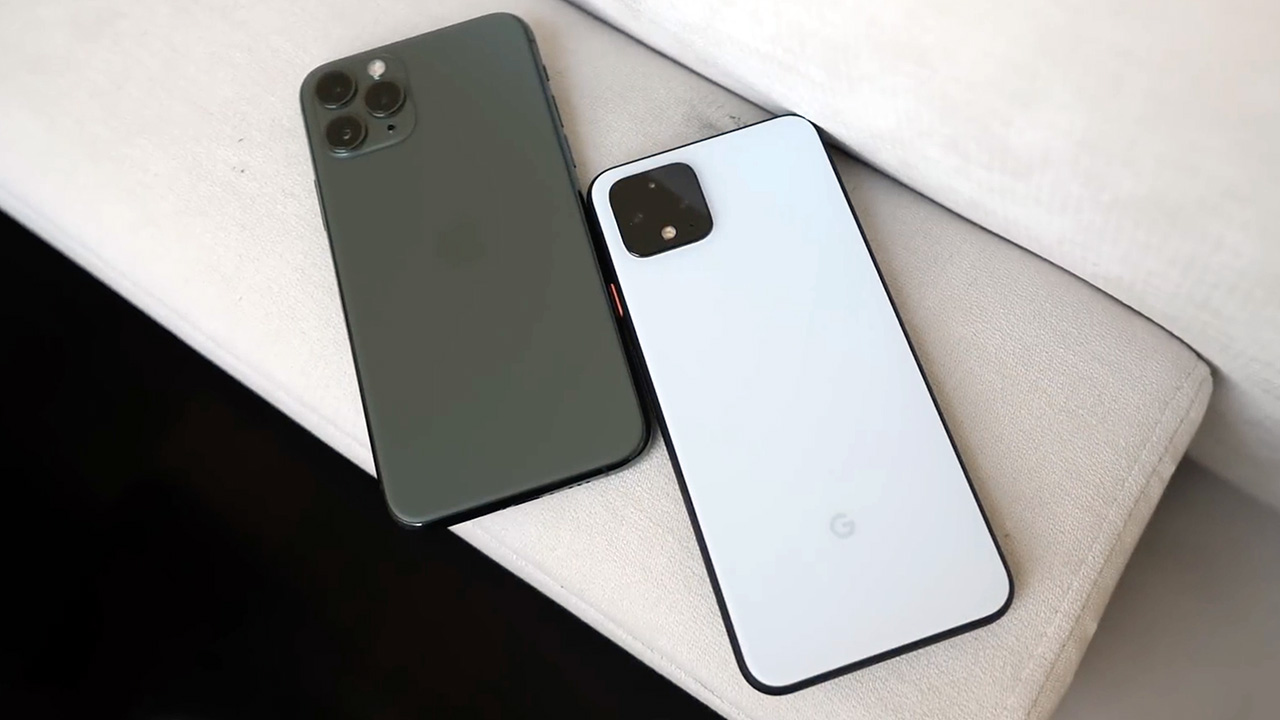 If I had to pick one, this is the first time EVER, that I’d side on the iPhone given my needs for video, but then again my needs are not the ones of most consumers. If I had to recommend one to you, I’d say the Pixel 4 is the better phone for everyone. Apple just shoots itself in the foot with that price, and the Pixel is less expensive, has an insane camera, and Google’s approach to software is far more complete.

And I think this would be the first time I ever have a tie in a comparison where each wins a different category. You get the point, I singled out which phone is better for what, and you’ll decide which one is right for you.

Here are the 5 reasons to buy the new Galaxy S21 series.