The iPad Pro is being touted as a productivity tablet, but it’s running iOS which will hamper that productivity. Maybe OSX would have been a better choice.
Published 10 September 2015, 12:00 EDT

The iPad Pro made its debut yesterday to much fanfare and ballyhoo. This is probably one of the most anticipated mobile devices since, well, I guess since the Apple Watch just scant months ago. The iPad Pro is everything we expected it to be – it’s a gigantic iPad. Measuring in at 12.9 diagonal inches, this monster is as tall in landscape as the iPad Air is in portrait.

This is no accident either. iOS 9 is coming with its new split-screen capability, making true multitasking possible for the first time ever (unless you count every other company in the world that’s done it)! This is going to be an interesting experience since iOS has, in the past, not only shunned true multi-tasking experiences, but for some time actually forbade app developers from making anything of the sort. Here’s looking at you, Inglorious Apps. #ThePowerOfGlimpse

But the Apple gents were all atwitter about how powerful the iPad Pro is and how it’s faster, better, stronger, and longer than other mobile computing devices. I’m sure the iPad Pro is indeed very powerful, but I have to wonder if this might be a missed opportunity for Apple in the long run.

The iPad Pro runs iOS 9, because of course it does. In the meantime, Apple has another OS that, with some improvements here or there, might actually be better suited for such a large device – OS X. OS X is still a pretty light weight and nimble operating system that might have run very well on an iPad Pro. We are talking about a professional tablet after all. Isn’t professionalism all about productivity? You are allowed to harp all you want about how Microsoft was on stage showing off office (and by the way, ow about that huh?!), and how there’s a physical keyboard to go with it, but at the end of the day, the iPad is first and foremost a content consumption device.

Look out in the stands during any tech event. You don’t see iPads; you see Macbooks. While fully acknowledging that I haven’t used the iPad Pro keyboard, I’m willing to bet dollars to donuts that the iPad Pro will not be “lapable”, nor usable on a train or car, and further I bet the keyboard/kickstand of the Surface Pro 3 is far more comfortable and stable than that of the iPad Pro. Admittedly, the iPad Pro is a first generation product, but we’re starting to wander off course here a bit.

The bottom line here is that the iPad Pro is seemingly geared toward…well…pros. And iOS 9, even with Microsoft’s split screen feature, isn’t really going to be a multi-tasking machine with its gigantic grid of icons, and double pressing/3D touching (whatever that is) the home button for cards. It’s frankly too clunky. But some optimization of Mac OS X could have been a great thing for Apple on several fronts. 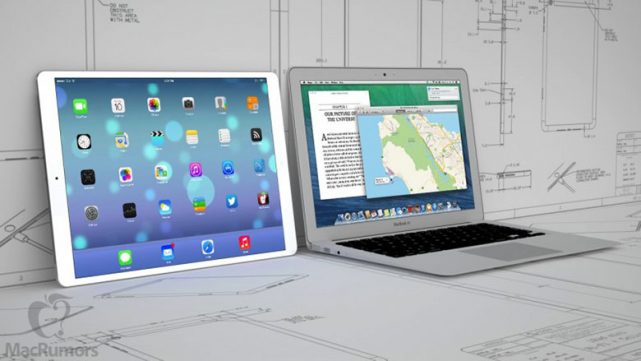 First, it would bring iOS and OSX closer together. We are approaching a time when the line between operating systems is going to get fuzzy, or just get erased altogether. Microsoft is already well on its way toward that. A touch-optimized version of Mac OSX could have been a really great thing that would help bridge the gap between iOS and OSX. But maybe Apple’s not interested in following the Microsoft philosophy.

Then, consider those professionals that Apple is looking to draw. The iPad’s time is waning – sales are on the decline, so I’m not sure another tablet is what the world needs. The iPad is considered a plaything in the minds of many decision makers. Sure you can draw a woman in a dress for an ad proposal, but most people just stream Netflix and call it a day. That’s why Microsoft’s approach with the Surface Pro, running its full-bodied Windows operating system is a better recipe for success.

I wish Apple has taken a long view on this one and spent the last couple of years adapting OSX for touchscreens. Apple would have done it pretty well, I think. It certainly would not have gone the “put your right foot in, put your right foot out” approach of Windows 8.1. I like to think that Apple might have managed something with a bit of class for iPads of the future.

As it stands, it’s just a giant iPad. But back in the day, the original iPad was basically just a giant iPhone, and that sold like hotcakes, so what do I know? I like the idea of Apple unifying its operating systems into one whole, similar to what Microsoft is trying to do, but I also respect Apple for sticking with its philosophy that tablets and computers are fundamentally designed to do different things. But it also makes me wonder, if that is truly Apple’s philosophy, then exactly who is the iPad Pro for?

It seems that the iPhone 12 won’t be ready in time to attend Apple’s next event, which would focus on other devices

On today’s Pocketnow Daily, we talk about how the iPhone 12 may not arrive in time for the upcoming Apple event, and more.