Read our full review of the iPad Mini where we compare it with other tablets like the Nexus 7, provide a gallery of photo samples, and talk about performance
Published 08 November 2012, 10:55 ESTUpdated 13 March 2013, 15:11 EDT

At long last, our wishes of a smaller and lighter iPad have come to fruition. The iPad 3 and 4 are great products, but they’re heavy and thick, and because of this, exhausting to use for a long period of time. Apple has done a lot right to be the leader in tablets. Whether you love or hate iOS, you have to admit that the iPad brand represents some pretty important things: great hardware, great battery life, and a great app selection. For the first time ever, Apple is introducing a new form factor for its iPad, one that is significantly smaller. And there isn’t exactly fervent competition in this space, either. The closest competitor to the iPad Mini is the Nexus 7, a $200 tablet from Google and Asus that is positioned for a different kind of consumer.

Steve Jobs said that 7″ tablets were dead-on-arrival, and Apple is here with their 7.9″ tablet, claiming an increase of 36% in screen space over other 7″ tablets like the Nexus 7. Is Apple again distorting reality, or is the iPad Mini really a different kind of “smaller” tablet? What kind of consumer has Apple targeted with the iPad Mini? Is it worth buying this first-generation product, or should you wait for the next Mini? Read our full review to find out! 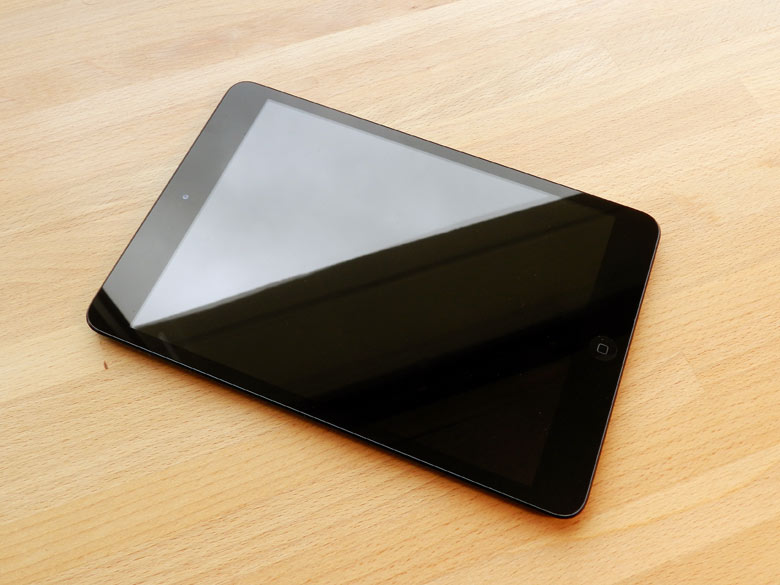 The iPad Mini is like a razor-thin slice of screen. It’s quite beautiful. 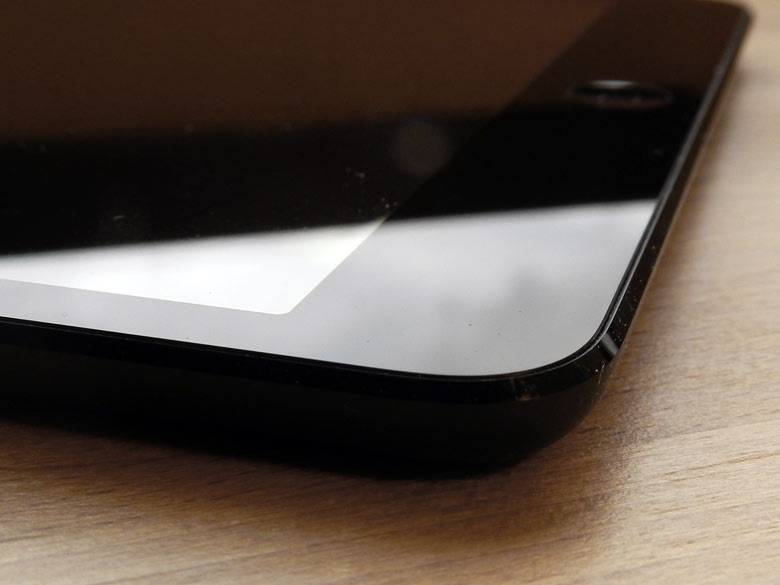 Like the iPhone 5, the iPad Mini has a beveled edge. It seems that Apple has improved its manufacturing process because we have yet to accidentally scratch the edge, nor did it come from the factory with any chips, as was the case with many iPhone 5s. 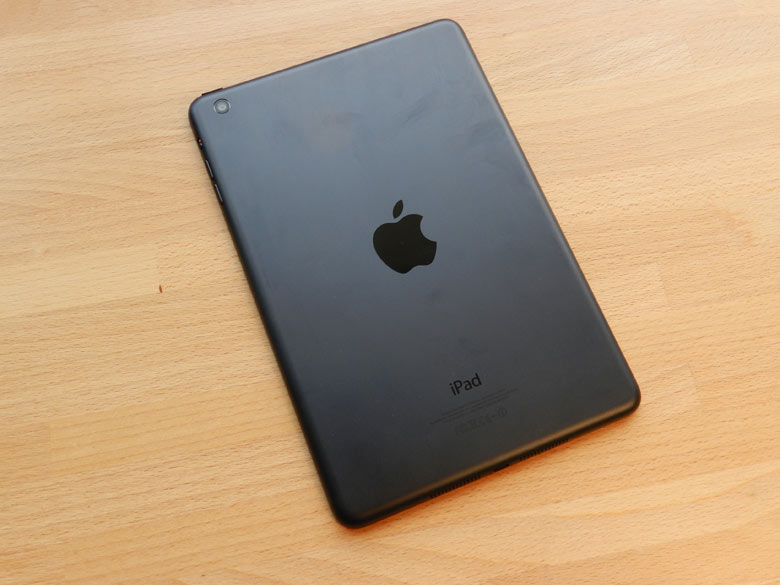 The gun-metal backing is all aluminum, and it’s cool to the touch when you pick it up. If you go with black, fingerprints will show up much more easily. Towards the top is the 5MP iSight camera, which takes impressively good shots. More on that later. 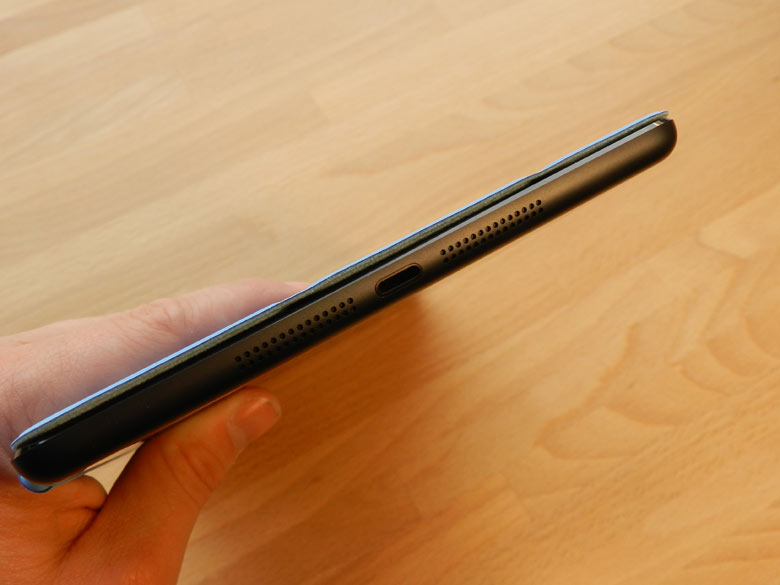 The iPad Mini has the Lightning charging connector. Flanking the port are stereo speakers which sound just a little bit louder than the mono speaker on the other iPads. 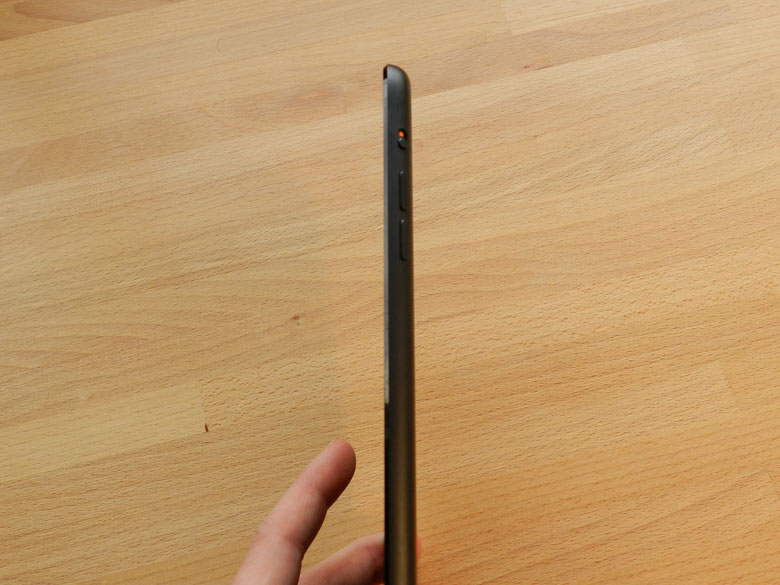 This thing is thin. Thinner than you think. 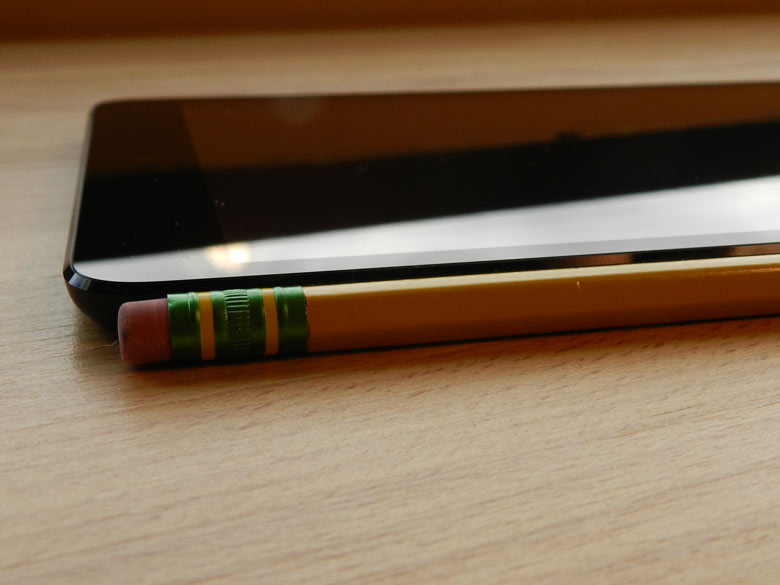 Apple claims that the Mini is as thin as a pencil, and here’s proof. It is. 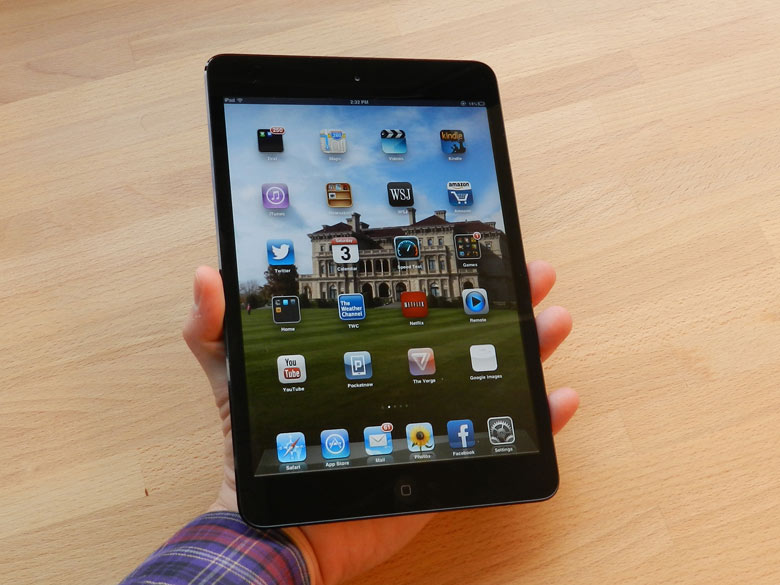 Compared to other 7″-class tablets like the Nexus 7, the iPad Mini is wider. If you have small or medium sized hands, you might find it awkward to hold with one hand if you’re trying to hold it from edge-to-edge. You’re more likely to hold it along the side bezel or from the bottom. If you hold it from the edge, Apple has employed finger-rejection software to ignore your thumb if it’s resting on the edge of the screen. In fact, this finger-rejection now works in all iOS 6 devices, including the other iPads and iPhones. 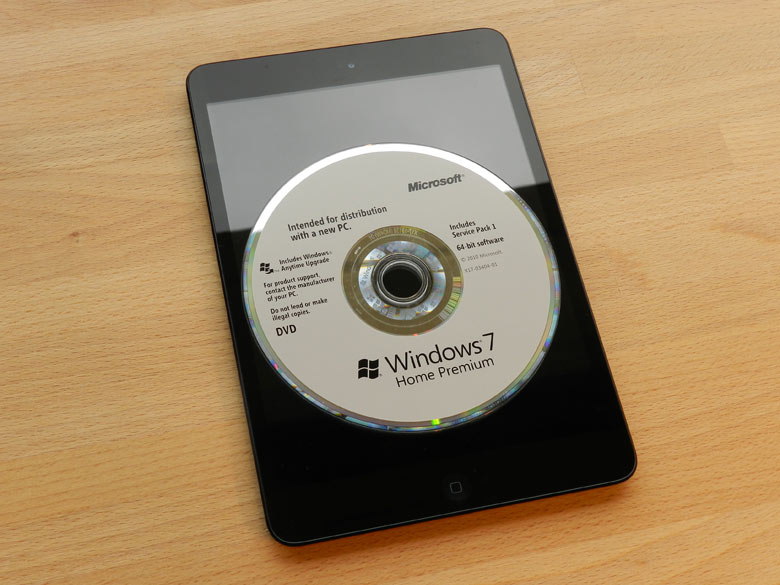 If you’re trying to get a sense for the width of the screen, it just so happens that a CD spans the exact width of the display. (Kids: a compact disc is a digital storage device from the 1980s that can contain music, movies, or software.) 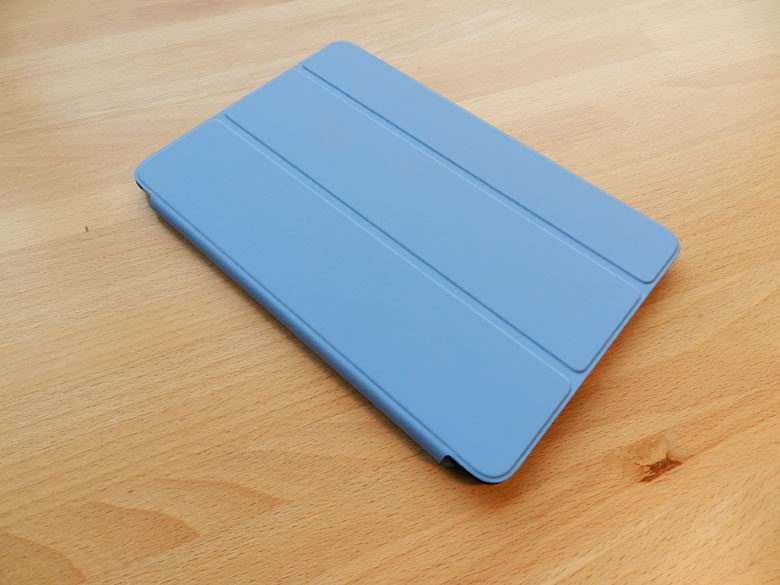 Apple is making a Smart Cover to work with the iPad Mini. This blue looks especially nice with the black. The Smart Cover is still a pricey accessory at $40. 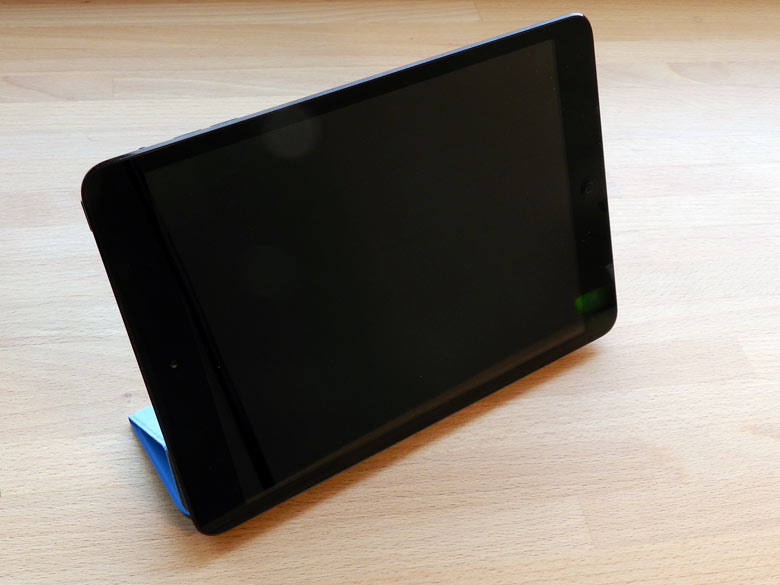 But it works quite well to prop up the Mini on a table, or on your lap for typing. 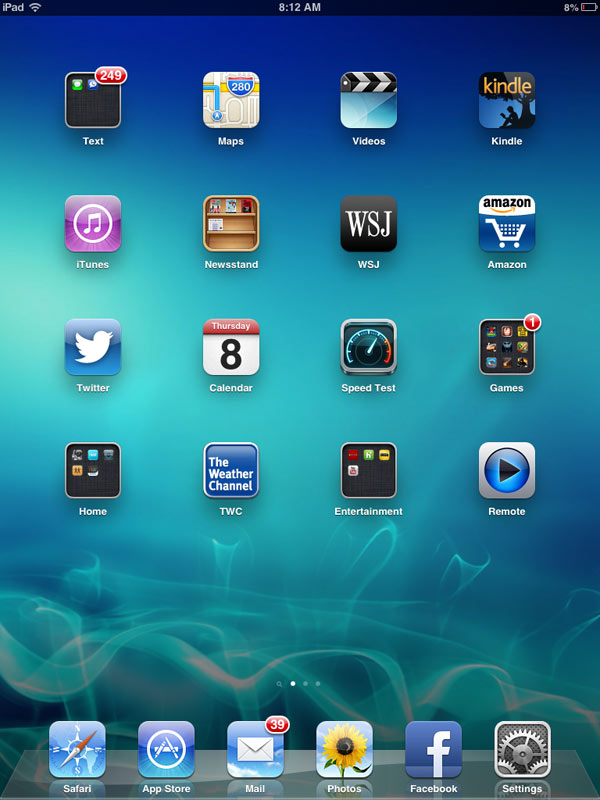 The iPad Mini runs iOS 6, which, like all iOS devices, has fantastic ease-of-use, access to great cloud services that bridge together all Apple products, and access to the most comprehensive app store in the world.

But alas, iOS, with each new product that runs the operating system, seems increasingly stale and boring. Adding movie reviews to Siri or VIP to email just isn’t enough to keep the platform interesting, not while Android is innovating with Photo Sphere, multiple user support, gesture typing, rich notifications, lock screen widgets, and Google Now (which is infinitely more useful than Siri). It’s not that iOS is bad, because it’s not, it’s just no longer thrilling or interesting. When something is too familiar and it no longer surprises you, it becomes boring.

The saving grace for the iPad Mini is the hardware: it’s remarkable. It makes you forget, if only for a few moments, that iOS has stagnated. And the truth is that you spend most of your time in apps, anyhow. 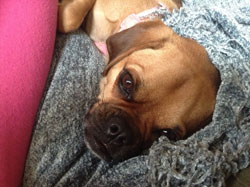 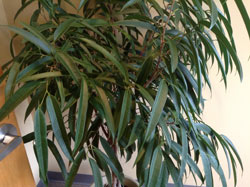 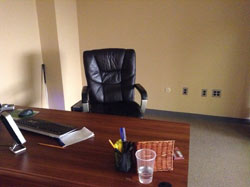 We don’t often talk about the camera on a tablet, because who uses a camera on a tablet? In the case of the iPad Mini, perhaps more people will be using this camera, because it’s darn good. We’d compare the photo quality of the Mini to the iPhone 4 or Galaxy S II.

Here’s a look at how the iPad Mini compares to its closest competitor, the Nexus 7. As always, thanks to the nature of Android, if you want to be able to customize your experience, the Nexus 7 is a fantastic choice. It’s also a great choice if you’re on a budget and want a tablet that is a solid value. But if you’ve got a little more cash to spend, you don’t mind the boringness of iOS, and you want to buy into (or have already bought into) Apple’s walled garden where all of their products talk to each other, the iPad Mini is the clear choice. 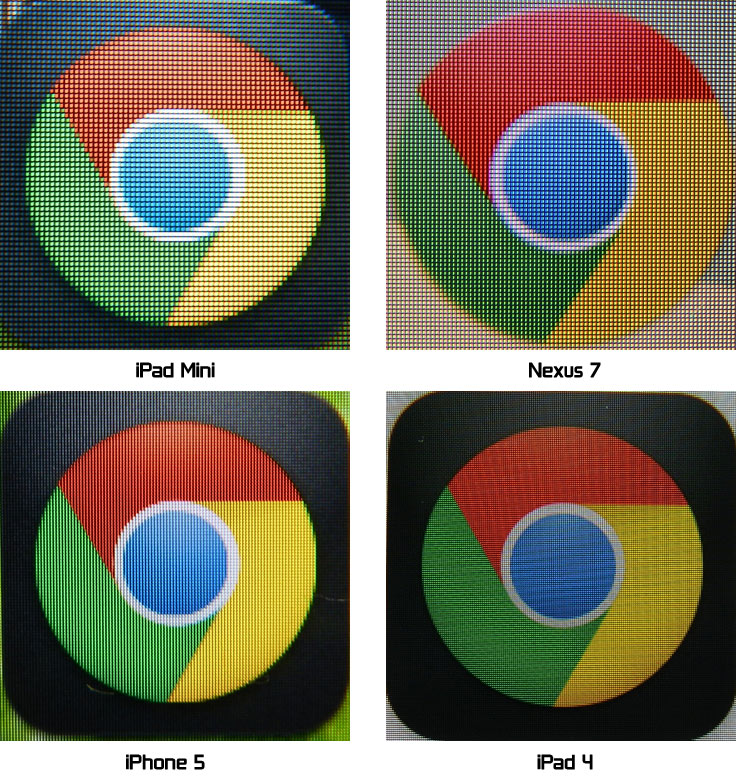 The display of the iPad Mini is very high quality, just as we have come to expect from Apple mobile device displays. The color saturation is great, contrast is excellent, and viewing angles are wide. But then there’s the resolution. As you can see from above, if you’re looking at the Mini from less than 18″, you’re going to see pixels. And if you own a higher resolution device (whether iOS, Android, or Windows Phone), you’re going to notice. But if you’re conscious to hold the Mini at least 18″ away from your eyes, the screen smooths out a lot. It’s a frustrating compromise, but it’s one that’s not unique to the iPad Mini, and also has to be made (to a lesser extent) on tablets like the Nexus 7. 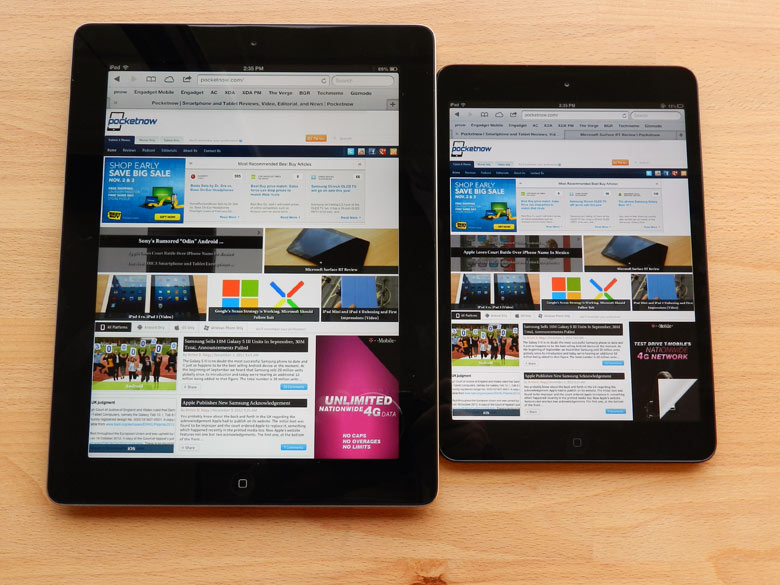 Here’s the Mini next to the iPad 4. As you can see, the exact same amount of content displays on both, despite the iPad 4 having four times the pixels of the Mini. How could this be? The iPad 4 displays all screen elements with quadruple the amount of pixels compared to the Mini. It’s what Apple is doing with the Retina displays on their Macbooks. Our reason for showing you this is to demonstrate that while the Mini is indeed smaller, you get to see as much data on the screen at once when compared to the bigger iPads. 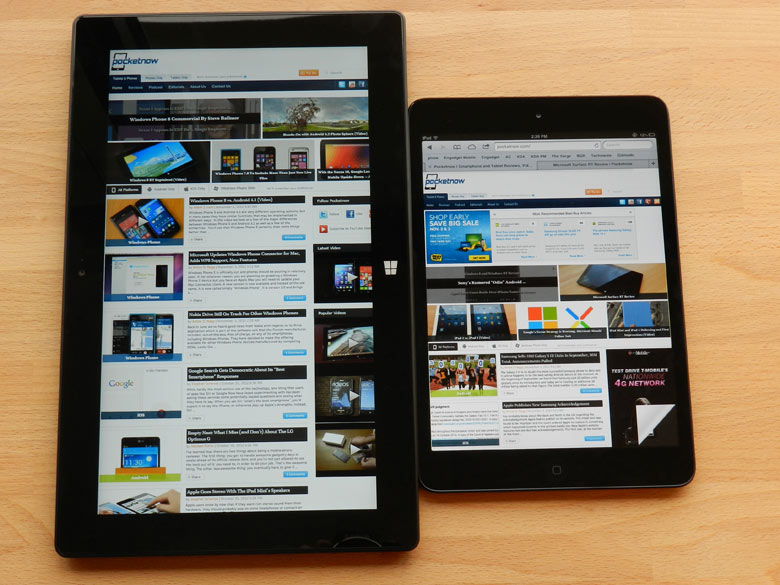 Just for fun, here’s the Surface RT next to the iPad Mini. The Surface has a very tall screen because it’s a 16:9 device, while the iPad Mini, and all iPads, are in a 4:3 aspect ratio. 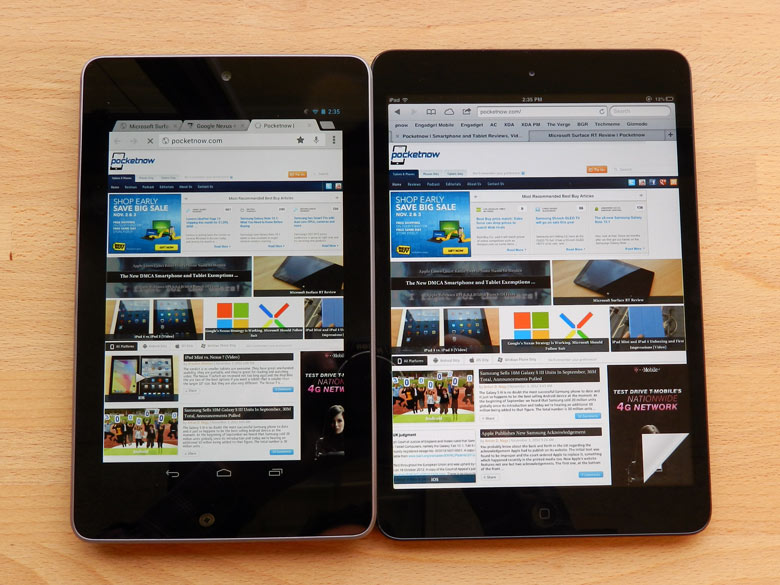 Again, here’s the Mini next to the Nexus 7, both on maximum screen brightness. Both are showing about the same amount of the webpage. 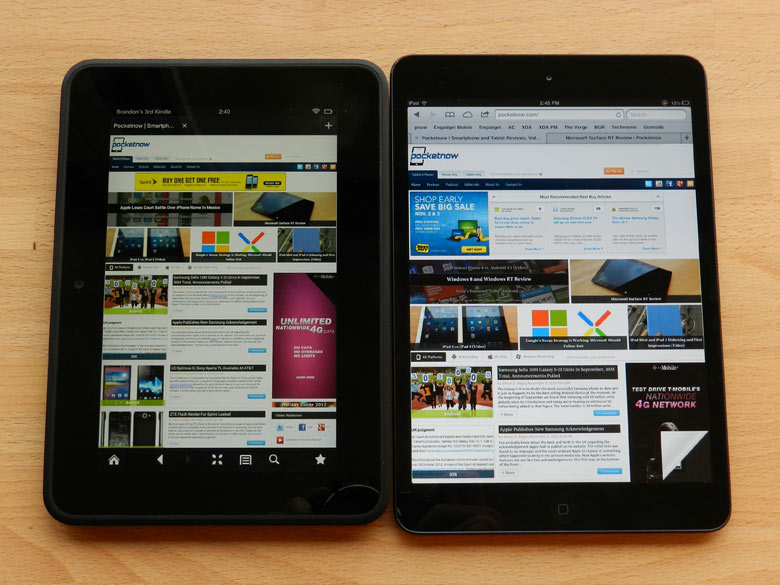 And here’s the Kindle Fire HD 7″, which starts out at a more zoomed-out view. 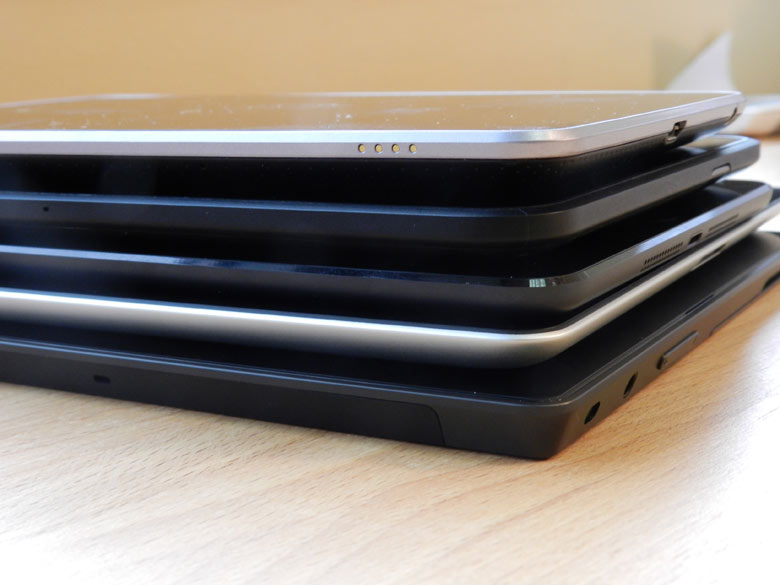 We were a bit worried that the iPad Mini, with a last-generation A5 CPU, would be a bit of a slouch in terms of performance. We can report that this is fortunately not the case: the Mini is exceptionally responsive in day-to-day use. Moving between apps, browsing the web, and playing games is a smooth and lag-free experience. The exception is with some of the more demanding games, such as Modern Combat 3, which take some extra time to load when compared to the iPad 3 and 4, and also can be choppy at times. Overall, we were satisfied with the performance.

The battery life of the iPad Mini is terrific. In our testing of mixed usage, we were able to use the Mini for a full 10 hours before needing to plug in for a recharge. And charging times are reasonably quick, too, requiring 3.5 hours to go from 0-100%. If you want to charge even faster, use a 10w charging adapter from the 9.7″ iPads (just don’t make a habit out of it, as repeated use could damage your battery).

You can buy an iPad Mini starting at $329 for the 16GB model in your choice of black or white. If you want cellular data with LTE, you now have three carrier options in the US instead of just two: AT&T, Verizon, and Sprint. Choosing the cellular data option will add $130 to the price of your unit, and remember: with cellular data on the iPad, you turn it on and off when you need through the settings. You don’t need a contract, nor are you signing yourself up for endless monthly payments for data, even if you don’t use it.

The iPad Mini is a miniature iPad, and that’s a very powerful prospect. It has just about everything we want in a small iPad, except for, of course, a Retina display. As long as you’re holding the iPad Mini 18″ or more away from your eyes, the lower screen resolution isn’t a deal-breaker. And while we aren’t excited by the $130 price difference between the Mini and the Nexus 7, what you’re paying for is access to a vast selection of quality tablet apps, plus exceptional build quality.

A note: there’s another important consideration to be made here. The iPad Mini is the first of its kind. Its biggest weakness, the display resolution, very well might be addressed in the second generation product. In fact, there are rumors to this effect already. If you plan on living with your purchasing decision for a while, you might want to wait 10 months or so to see whether the iPad Mini 2 has a Retina display. Our best guess is that it will. We’d also put our money on the iPad Mini 2, with a Retina display, getting a bit thicker and heavier, which wouldn’t be so bad considering how strangely thin and light the current-generation Mini is. 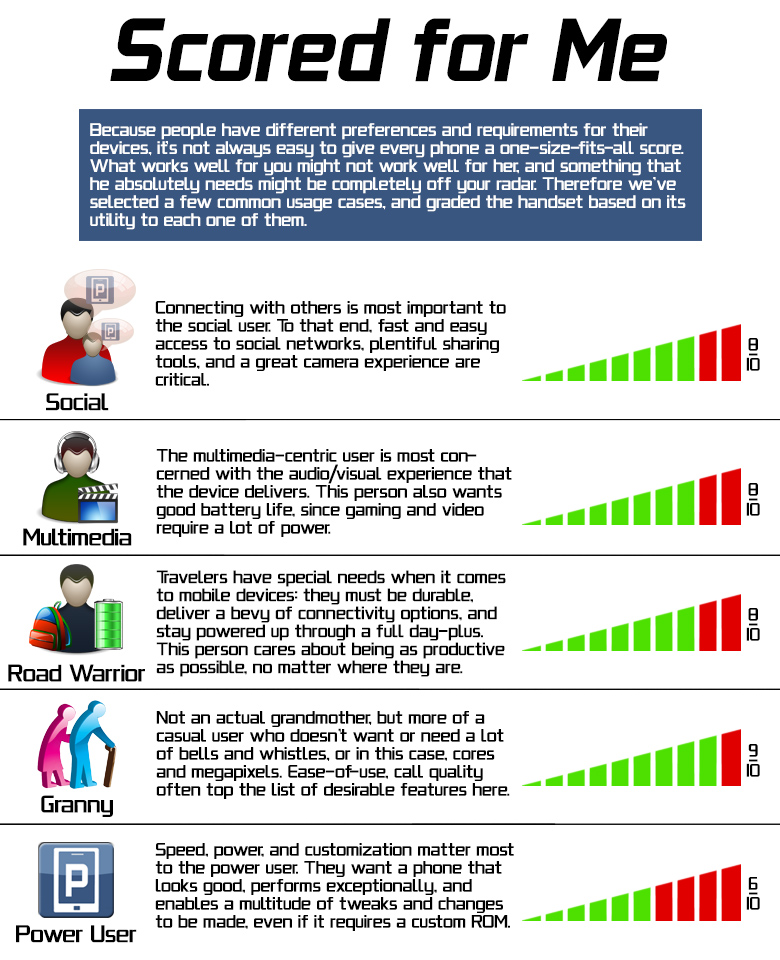 On today’s Pocketnow Daily, we talk about everything that we will get in the upcoming iPhone 12 Apple event, and more.

iPhone 12 Mini will be up for pre-order starting November 6, and will hit the shelves November 16 onward in the US.

Unlike xCloud service, you will need an Xbox One console from which games are streamed on your connected iPhone or iPad,.