Both mobile operating systems slipped down in market share, one more than the other. Like, in a big way.
Published 09 March 2016, 20:43 EST

Another edition of Kantar Worldpanel’s Smartphone OS Market Share Data report has come out and this one’s a doozy for both iOS and Windows. The numbers cover the holiday quarter of 2015 and they seem to show an overall decline in interest with Windows-based phones and iPhones. 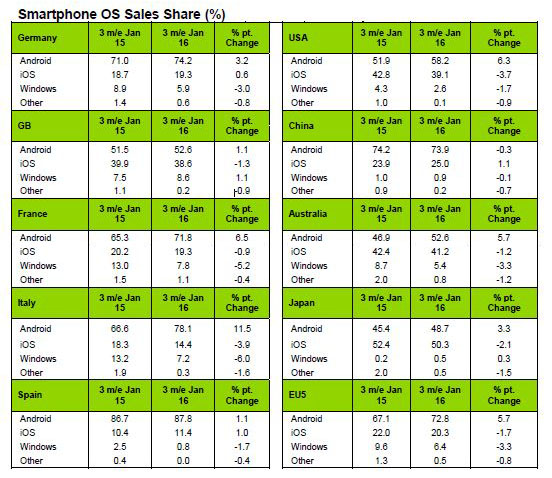 Windows saw a couple of steep changes downwards year-over-year, with Italy seeing a 6 percent loss in share, France down 5.2 percent and Australia off by 3.3 percent. Small, but measurable gains were made in Great Britain and Japan. Still, with shares dropping from double digits to below 8 percent, it’s not a pretty look.

Thanks to the underwhelming iPhone 6s and 6s Plus, iOS market share took more than 3 percent falls in the US and Italy. There was 1.1 percent growth in China, but that number has seen better times.

The most impressive annual growth in a certain market was found in Spain as Android jumped up from 66.6 percent share during holiday 2014 to 78.1 percent this year — that’s 11.5 percentage points.

A complaint alleges that WhatsApp is forcing its payments service on 400 million-plus users in India and that the company is abusing its market position.