iOS 8 stagnates according to Apple’s own statistics

Learn more about the current status of iOS 8 upgrades, as it seems that Apple is struggling to convince its own customers to upgrade
Published 07 October 2014, 13:52 EDT

Apple’s launch of iOS 8 has been met with some polarized reviews. While this is surely a more mature version of iOS 7, legacy devices like the iPhone 4s have nearly been crippled by the update, and on the other hand, a lot of the features are still not fully present, like Continuity for example. If you’re wondering just how well iOS 8 is doing, you’ll be shocked to know that even Apple doesn’t admit good numbers.

Apple has just published its iOS numbers, as tabulated by Apple Store visits. You’d assume that the launch of the iPhone 6 and iPhone 6 Plus would alone boost the numbers of iOS 8 users when compared to last-month’s numbers, but in reality, all we see is a 1% growth when compared to the previous numbers of September 21st. It could be that sales for the iPhone 6 and iPhone 6 Plus remained well, but users decided to downgrade to iOS 7 after they were allowed to with the iOS 8.0.1 fiasco. That’s sadly hard to confirm, but we do know that the biggest complaints came from iPhone 4s customers that felt their device slow to a crawl.

These numbers are not the complete install base though, so we should expect other numbers to emerge in the weeks to come as we do expect an Apple event in the next few weeks. 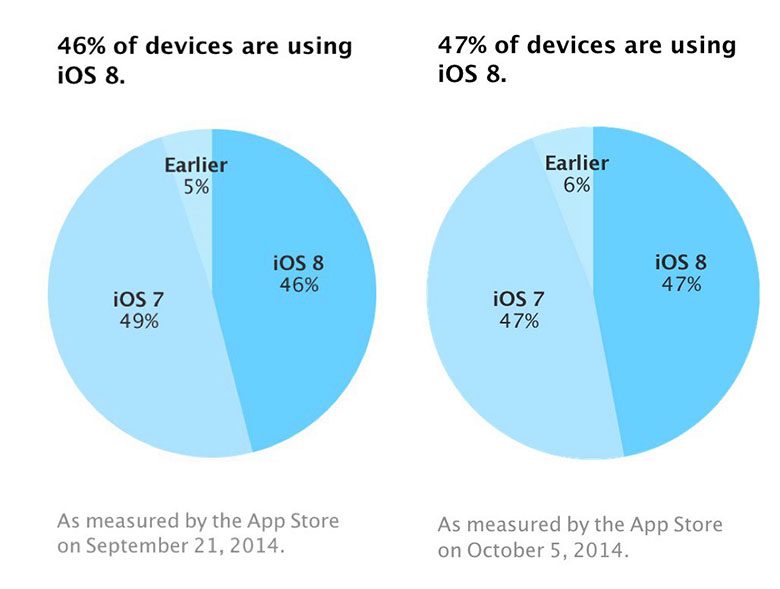