iOS 7 powers 74 percent of all compatible Apple devices, a number which is 10% up from two months ago, testifying for a very fast adoption rate.
Published 06 December 2013, 08:17 EST

Things are going faster and smoother for Apple when it comes to propagating the latest version of the company’s OS than, say, for Google, but the two companies are on a totally different strategy. While Android 4.4 KitKat is running on 1.1% of compatible Google devices, Apple’s iOS 7 powers 74 percent, a nice adoption rate to have for the latest iteration of a platform.

Of course, iOS 7 was announced and released earlier than Android 4.4 KitKat, giving it a relatively large head-start! Still, with the latest figures in, as of December 1, 2013, 22% of Apple’s compatible devices still run iOS 6 (and 4% are on an even earlier release), but the majority, 74%, is powered by iOS 7. This number is 10% higher than two months ago, in October, making iOS 7 the fastest OS to propagate and be adopted among all other versions of Apple’s mobile platform. 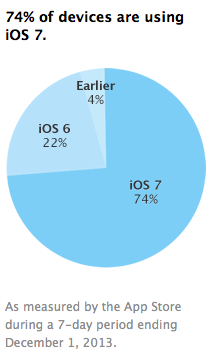