iOS 7 on the iPad worries me

iOS 7 is one of those things that you’ll either love, hate, or simply put-up with if you already own an iOS device. Some of us have been waiting for it for a long time. In full honesty, I think I was ready for a change even before Apple announced that there would be an iPad running it. Apple did a good job in polishing it and to keep me as their customer, but 2013 had to be a year of change for me, or else.

Some people hated the previous version of iOS for Apple’s choice in design, but I’ll admit that I actually liked it. As fake as it could be, it did a good job in looking elegant on my book. My biggest problem with the UI was mainly how many steps it took me to do everything, and not really how it looked. If I was watching a video and wanted to turn on Wi-Fi, I had to leave the video, find Settings, enter and then hit the toggle in order to return to my video. Four steps for something so simple was annoying, so there was some serious room for improvement here.

I still struggle with some of the design choices for iOS 7, like the color palette, or the design of certain icons, but the fact that I can switch toggles with a swipe, or get a glimpse of my day with another swipe is priceless. It’s enough of an improvement for me to be willing to put-up with a green phone icon, that’s so green that I sometimes can’t distinguish there’s a phone drawn within.

Now one of the things that struck me the most about iOS 7 is that even though it was simplistic, Apple made a ton of efficient choices in the design. I’m not a fan of how white the stock calendar or music apps are, but the fact that they used all the canvas on the iPhone efficiently is something that I praise. Apple didn’t just remove the stitched leather, but actually add extra functionality to that wasted space. For example, I honestly hated seeing a whole month of dates eating-up all the space of the canvas, and leaving only two lines for my appointments on iOS 6, and now iOS 7 deals with that in a much smarter way. All in all, my impressions of iOS 7 on the iPhone are positive, even if I don’t think the colors will ever grow on me.

The iPad version of iOS 7 in its beta 2 is sadly another story for me. If you saw my hands-on video of it, I’m sure you either found my opinion to be asserted, or you thought that I was too negative and harsh towards a “beta 2”. Surely, a beta is a beta, and nobody should ever judge pre-production software as good or bad, but those of you who found my opinion asserted focused on the point that I was trying to make.

My disappointment with iOS 7 on the iPad is not about how well it works on it. Bugs need to be ironed-out, so aside from saying that flipping apps on the iPad was actually more accurate and reliable than on the iPhone, at no point did I mention that the beta “worked” good or bad. All my arguments toward the beta were mainly focused on the design choices made by Apple, and these are the things that I want to clarify as to why they worry me in the particular case of the iPad:

iOS 7 on the iPad looks like a blown-up iPhone

When the original iPad was launched, even though it did run iOS, it was clearly designed to use the larger canvas in a more efficient way. If you opened the notes app, it was still the yellow notepad, but it gave you more options at the left, and so did email, the calendar and every other app. Probably my biggest disappointment when I loaded iOS 7 on the iPad, was that I felt that Apple took a step back instead of a step forward with this mentality. 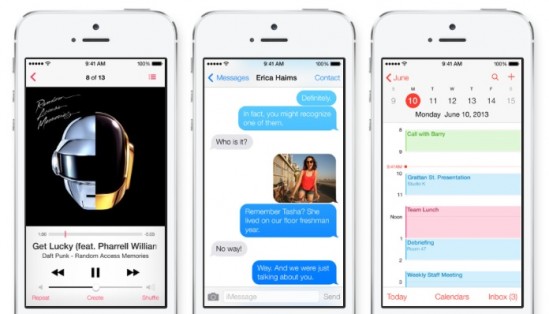 Instead of improving the stock apps, I get the feeling that they left them as they were and just removed the stitched leather. The reason why this worries me is because one known fact about pre-production software is that regardless of how many bugs it has, it’ll most likely not change in visuals, and it’ll just improve in reliability. Every stock app looks like a blown-up version of the same app on the iPhone, so it was clearly not enhanced to use the extra canvas, and this is really unfortunate. If the known fact is true and Apple isn’t changing anything, and just ironing it going forward, this is going to be a very boring tablet for many.

Now that said, there is a probability that this doesn’t happen. Apple could’ve been rushed to push iOS 7 for the iPad out of the oven in order to give developers a tool to work with while they finished the design of their stock apps. I’m honestly hoping that’s the case here, because things look very bad right now and there are cases where this is more evident. For example, the music app is so bare bones even when compared to its iPhone variant, that it’s clear that Apple still has work to do here, and I do remember this happening in iOS 6. In other cases, I’m not so sure sadly. The calendar is just a blown-up iPhone calendar. The Notes app is just a blown iPhone notes app with some terrible yellow fonts. Add to that the fact that iOS 7 is made to look more white and simplistic, and I think you understand why I feel even more bored with what I see today.

To conclude, I know this will burn some of you, but I feel like if I’m seeing Spotify on an Android tablet right now. Surely it works, but it’s clearly not optimized for a Android tablet. That’s how bad iOS 7 on the iPad looks right now.

How about some extra functionality?

Probably one of the things that annoys me most about any “non-Windows 8 Pro” tablet is that it’s no better than any smartphone it’s just bigger. I hate working on an iPad simply because most of the services we use require browser features that the iPad can’t support. One of the things that I was expecting most for iOS 7 on the iPad is for the gap between a tablet and a real computer to be bridged closer. Yes, I know that many of the things the iPad can’t do are because it simply isn’t powerful enough to do them, but I was expecting at least a little surprise from Apple with this new OS, and sadly the iPad is still the same iPad, and at times when Windows 8 is picking-up the pace with more affordable and less power-hungry tablets, I think Apple should be worried.

I’ll admit that my opinions are never final. I love being challenged by somebody else’s objective opinion on a subject, and there have been cases where people have proven to have a more objective approach to something than I have, and it helps me change my mind. I’ll also admit that I love change, and I praise almost every refresh, regardless if it’s still a work in progress. I’d rather see work in progress than just see a company in their comfort zone.

I do hope that Apple was just rushed to push this update to the public, and that there is still more to see in beta 3, 4 and how many other betas we get. If that’s not the case, then I will tell you this much: If iOS 6 and earlier got you bored so quickly, then I’m sure iOS 7 will speed-up that process even more. There’s a point where things are just too simple to be delightful, and that’s really what I debate with what I’ve seen with beta 2.

What about you? Do you like iOS 7 beta 2 on the iPad? Do you feel it’s rushed, or do you think it’s the final product? Leave us a comment.