Today’s WWDC 2013 keynote kicked off much how we were expecting it to, and after Apple spent a few minutes talking about the state of iOS/OS X union, as it were, it jumped right in to the new OS X, which it’s calling Mavericks. While there was some very cool stuff there, we’re just a smidge more interested in the mobile side of things. Luckily for us, after it got done showing-off a slew of its new computers, Apple officially announced iOS 7.

Tim Cook started by bringing us up to speed with some iOS stats. Apple’s sold 600 million devices running the platform since its inception, and though we’ve seen Android’s market share rise in recent years, Cook offers some statistics that point to iOS users getting a richer experience from their mobile devices, like how they spend 50% more time using their phones than Android users and how Apple can claim a 97% approval rating (with 73% reporting being “very” satisfied) from the iOS community.

Apple’s Craig Federighi returned to the stage to help explain some of what’s new in iOS 7. As expected, the new look for the platform places a premium on simplicity, making it clear how things work and enabling users to effortlessly complete their daily tasks. Icons are flat and cleaner, like we saw leaked, and individual apps get facelifts to instill in them a “look of precision and a sense of purpose.” 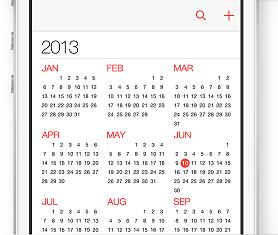 You’ll still see fanciful elements here and there – the weather app shows animated backgrounds based on the forecast, for example – but elements like the Game Center’s ugly green felt are now things of the past.

iOS 7 introduces a new Notification Center, letting you review both current and past notifications (including those you missed), and makes it available straight from your lock screen. A new Control Center is also accessible throughout the platform, giving users the ability to quickly adjust screen brightness, set connectivity options, and access media playback controls – just swipe up from the screen’s bottom to bring it up.

One intriguing new feature in iOS 7 is smart background app updates. The system will keep track of when you use apps the most, and then check for and install any updates during a time when you won’t likely be engaged with the app.

Safari gets a number of improvements, like support for additional tabs, full-screen browsing, parental controls, a smart search field, and support for the iCloud Keychain. That last one’s something Apple announced a little earlier today as part of its iCloud overhaul, and it stores things like site passwords and credit card info, then lets you quickly populated forms in Safari with that data. 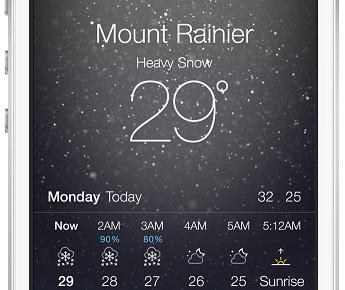 AirDrop is a new way to share data with other iOS users. You’ll be able to see nearby users from within an app’s share sheet, and if you’re both using modern hardware which supports it (iPhone 5, iPad mini, and the most recent iPad and iPod Touch models) you can send them files via peer-to-peer WiFi.

On the imaging front we’ve got an updated Camera app that has some new tricks like the ability to display the effects of photo filters in real time, and Photos adds some improved image management tools, helping you sort based on where and when pictures were taken. Photo Streams get enhanced for multi-user use.

Federighi passed the mic to Eddy Cue to talk about how iOS 7 works with services, and he got started by detailing what’s happening with Siri. There’s a lot changing here, from a new UI (with a cute little waveform display), to interactions with more web services, to giving you expanded control over device settings. 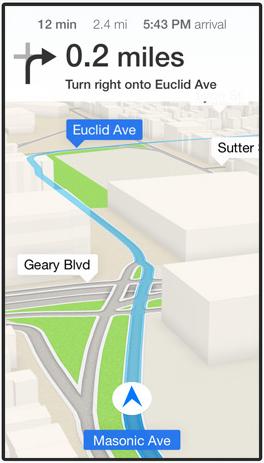 Apple’s been working with car manufacturers to build iOS support into newer models, and next year you should see such a feature on models from Honda, Mercedes, Nissan, Ferrari, Chevy, Infinity, Kia, and Hyundai.

We were on the fence about whether or not it would be revealed today, but as part of its keynote address, Apple has gone ahead and confirmed the long-rumored iTunes Radio (not iRadio, after all). Sure enough, it will be ad-supported, but users paying for iTunes Match will get to experience it ad-free. The service will let you skip tracks, build custom stations, and of course purchase tracks you like.

And yes, unfortunately iTunes Radio will be a US exclusive at launch. Those licensing deals are a pain to negotiate, and we’re expecting Apple to expand access to Radio as it works out more agreements for international use.

Beyond all of that, Tim Cook mentioned a few other iOS 7 features in passing: you’ll get cross-device notification sync, FaceTime calls that are audio-only, new app-specific VPN controls, an “Activation Lock” that helps protect your phone from sophisticated thieves, and controls to block things like calls or messages when you just want some time to yourself.

Alright, now who’s going to be able to upgrade to iOS 7? Apple’s dropping the 3GS and the fourth generation iPod Touch. That means that the iPhone 4, iPad 2, iPad mini, and iPod Touch 5G are the oldest models from each of their classes that will see iOS 7 arrive.

Developers get beta access today for the iPhone, with iPad support coming soon. As for the rest of us, look for a release this fall.

Redmi K30 Ultra is said to feature a quad rear camera setup – with one of them using a 64MP sensor – while a MediaTek SoC ticks at its heart.