Seven weeks in, ‘only’ 52 percent of active iPhones and iPads run iOS 11

The majority of iDevice users are already on iOS 11, but the latest platform version isn’t spreading anywhere near as fast as iOS 10 and 9.

It would probably be unfair to call iOS 11 unusually and frustratingly buggy, as Apple’s renowned attention to detail and insane focus on software stability have never been enough to produce the flawless platform update right off the bat.

You can do all the careful preparation and rigorous testing in the world, and still you won’t be able to launch the perfect new OS iteration for the millions and millions of smartphone and tablet users out there.

But something about iOS 11 must be different, considering the uncommonly low adoption rate officially reported by Apple after November 6 App Store measurements. Roughly seven weeks in, only 52 percent of active iPhones and iPads are up to date, compared to 54 percent for iOS 10 in early October 2016 and 60 percent later that month. 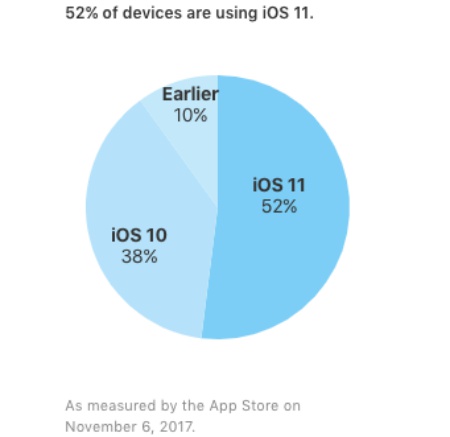 Keep in mind that iOS 10 was generally released on September 13 of last year, with iOS 11 seeing daylight on September 19, 2017. Looking further back, we all remember how proud Tim Cook was of iOS 9’s early numbers, deemed the “fastest adoption rate ever for a new operating system.”

We’re talking a 50 percent+ spread in just five days a couple of years ago, so although more than half of the world’s iDevices are already running iOS 11, Apple has to wonder what happened with that record-breaking enthusiasm. Are iOS 10 and “earlier” versions good enough for 38 and 10 percent of users respectively, or is this large chunk of iPhone and iPad owners harder to please than ever before?