Riddled with bugs right out of the gate, iOS 11 has struggled to rival its predecessor’s adoption pace over the past few months, although 76 percent is still a fairly impressive number.
Published 27 April 2018, 08:48 EDT

Apple is reportedly more focused than ever on the stability and reliability of its next major iOS release, despite cooking up pretty significant upgrades in the mobile hardware department for a commercial debut in the fall.

The main reason iPhone and iPad users might be getting fewer new software features in September has become more and more evident in recent months and even the past few weeks.

Apple’s seemingly never-ending struggle to fix various iOS 11 bugs is probably to blame for the latest platform build’s slow adoption as well. That’s slow by the Cupertino-based tech titan’s sky-high standards, mind you, as more than three quarters of the world’s iDevices are already running iOS 11, according to official April 22 App Store measurements. 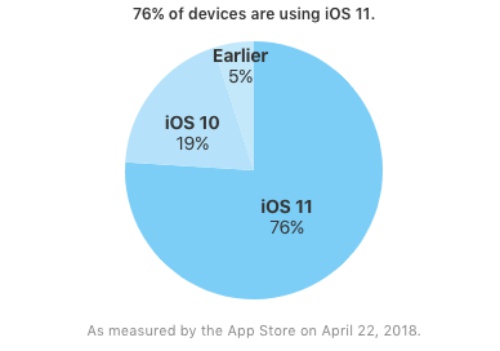 We don’t have to tell you how the 76 percent share compares to Google’s slice of the Android pie recently attributed to OS versions 8.0 and 8.1 Oreo. But it is important (and fair) to point out iOS 10 had already reached 79 percent adoption way back in February 2017.

Of course, iOS 11 seemed a little sluggish right out of the gate, requiring around seven weeks of public availability to break the 50 percent barrier, then jumping to 65 percent over three months ago.

iOS 10 is currently on 19 percent of active iPhones and iPads, while “earlier” versions retain a minuscule 5 percent market share. It remains to be seen how high iOS 11 can go before its follow-up arrives to save the day.