Need help remembering what Google Now can do on your Android phone? Here’s an interactive way to learn OK Google commands!

We love finding cool stuff on the internet.

Voice assistants have a small (and growing) problem. They’re collectively capable of some pretty in-depth phone controls, but the way we interact with them still isn’t quite as sophisticated as talking to a computer in Star Trek. If you don’t format your command in the right way, you might end up with a plain-Jane web search instead of the action you wanted.

We get regular updates from developers, adding additional commands, but often the documentation is lacking when trying to find a comprehensive list. This led web developer Kristijan Ristovski to try his hand at creating a better educational resource for Google Now.

“Annoyed by the fact that every once in a while a new “complete list of google now commands” appears online, i decided to create this project.”

This might feel a bit like that XKCD comic about creating new standards, but the layout for OK-Google.io is simple and pretty. A column on the side organizes roughly 150 individual types of commands, and opening each category delivers an expanded view of the over 1000 variations on each command that Google Now will respond to. 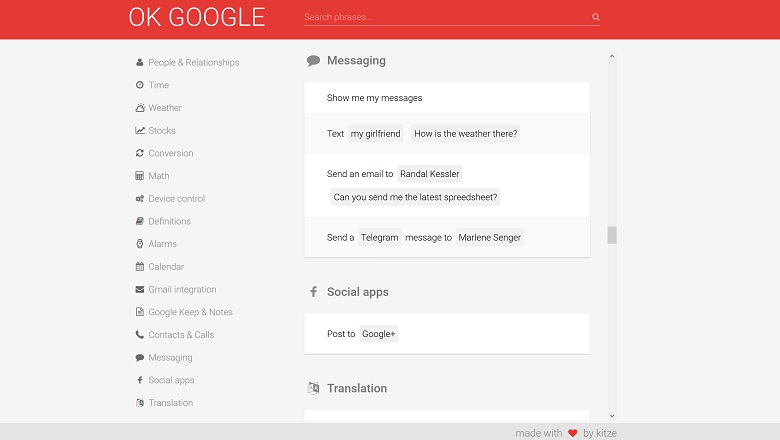 It’s handy, as a plain text list can be a bit daunting to chew through, so having organized categories is helpful for finding what you need. Plus the interactive aspect of looking through command variations even helped this author discover a few tricks he didn’t know about.

It’s a tricky situation for voice assistants, that we expect the list of features to increase, but that can make feature discovery more difficult over time. Until we get IBM Watson on our phones to handle all of the data on our devices like the OS from the movie Her, we’ll have to wade through performing commands in a way that Siri, Cortana, and Google Now can recognize. Resources like this can help keep us up to date on what’s new.