Intel today announced its family of 10th Gen Intel Core Processors, consisting of 11 chips specifically dedicated to laptops and 2-in-1 devices. The codename for the family is “Ice Lake”, and the range varies from the simplest dual-core i3 processor to the highest-end quad-core i7, all built on the 10-nanometer “Sunny Cove” architecture.

However, there are three different graphics options which will complicate the model numbers a little bit. The Iris Plus graphics solution is at the core of the experience, being able to deliver 1080p gameplay, laudable for a light-weight laptop computer. You can see a rundown of the processors in the image below.

We’re going to see two major families within the line-up, with the Y-series addressing slim computers, and the U-Series for more capable devices. In terms of speeds, you can expect performance of up to 4.1GHz with boost speeds in the highest-end model, as, according to Intel, the Sunny Clove architecture is capable of delivering 18 percent more instructions per clock than previous ones. Add larger L1 and L2 caches and you have a recipe for success.

In terms of availability, we expect, and so does Intel, to see products running on these new chips around the holiday season.

You can find more details in the official press release below. 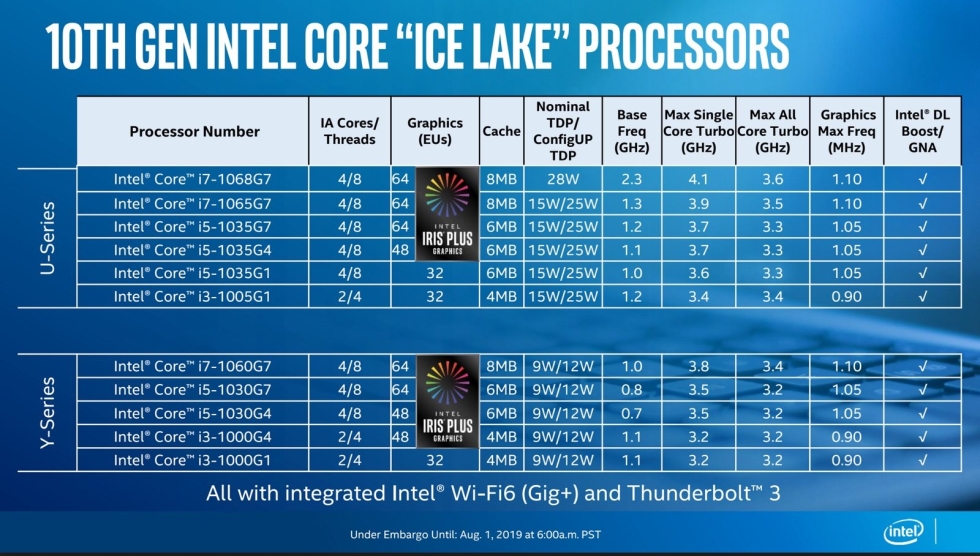 The report goes on to say that Google and Samsung will be continuing to work on F2FS support for Fuchsia.

Check out the latest deals available at Best Buy, where you will find several smart speaker options, laptops, and more devices on sale