The Innori CD slot phone mount makes the CD player in your car useful again for a pretty low price. We gave it a look and liked what we saw.
Published 26 November 2015, 10:00 EST

The CD player is one of those items that you probably have in your car, and if you’re like us, you don’t use. It just kinda sits there. It’s a slash that cuts right through our dashboard which used to be somewhat useful, but hasn’t been used in who knows how long and hasn’t worked in who cares how long. So now that something has finally come along that makes that feature useful, we’re excited. The Innori CD Slot phone mount does just that.

We have been using a similar mechanism in our car for some time now. But this particular version by Innori has us intrigued enough to give it a shot, in leiu of our normal phone holder. We have been using the Innori CD slot phone holder for about one week and we wanted to tell you a little bit about it. 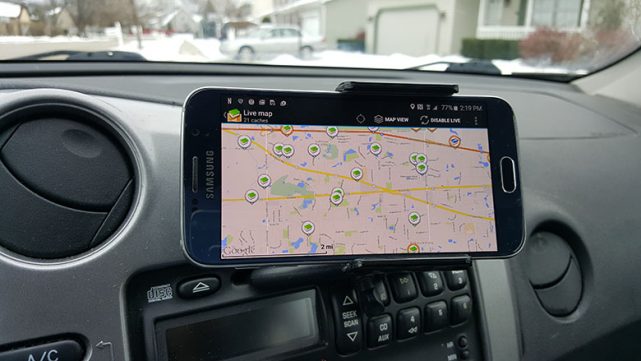 An end to futility

Through the years, we have tried all sort of phone mounts in our cars. We’ve had all manner of adhesives and hooks and screws and bolts in our vents and dashboards and windshields. None if it worked very well, or if it did, chances are it damaged the car. Finally, we have a mechanism that is mechanical and secure in a part of my car I no longer use. This is a win.

Innori’s Universal Mobile CD Slot Mount gives that CD slot purpose with a mechanical mount that won’t damage your car. It has a spring clamp with a 360 degree swivel that can hold all manner of phones vertically or horizontally in a comfortable viewing position while driving – not that you should be looking at your phone while driving, but that’s a different editorial. There are a few plusses and minuses here, so let’s dive in.

The front of the phone holder is a spring clamp that grasps your phone from both sides. The insides of the clamp a tilted inwards at about 10 degrees to give a firm grab on the thinnest of phones – even the Samsung Galaxy S6 Edge. The mount expands out to hold anything from a 3.5-inch to a 5.5-inch phone. It clamps it in a tight hold with a grippy material on the inside to make sure nothing is slipping out.

The grip is mounted on a 360 degree swivel joint that can be tightened so it doesn’t move. This allows you to position the phone horizontally or vertically, depending on what’s most convenient for you. We tended to keep our phone vertical unless navigating. In those cases, a simple turn got the phone pointed in the right direction. When tightened the phone is not moving, even over rough roads and bumps. It’s a solid clamp and solid joint. 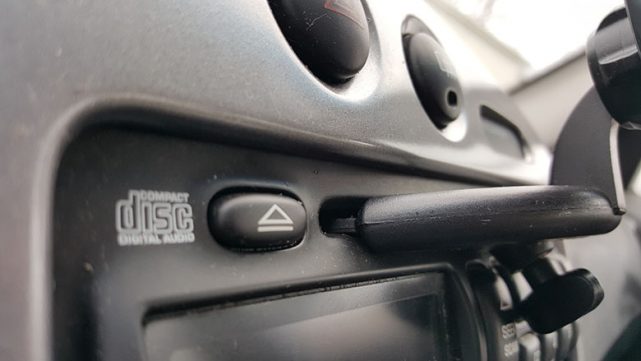 Bringing it all together

Finally, at the back is what we’re here to see. There are basically 4 flaps of plastic that insert into the CD player. Twisting a knob pushes the flaps up and down in a reverse-jaw movement which secures the mount to the top and bottom of the CD slot. As we said before, this provides a solid mechanical mounting in your car that doesn’t require any additional hardware or adhesive be added to your car. It’s an elegant solution now that many of us have graduated past the CD.

There are some downsides to the device. First and foremost, of course it’s not all that easy to actually use the CD player, in case you happen to live in 2005 or something. So there’s that. Plus the spring-loaded nature of the clamp makes it hard to insert/remove the phone one handed. With a little practice you can maneuver your hand to push the phone while pulling the clamp and you can slip the phone into the clamp, but removal is almost always a two-handed affair. Also, the phone holder is not all that deep, so if your phone is rocking a thicker case – of the Otterbox variety, you will probably have issues. Our recently reviewed TYLT Energi case did not fare well in this holder.

Finally, the clamp doesn’t have a bottom, so the force of the grip on either side is the only thing keeping your phone from surrendering to gravity. Other models that we have used have had a bottom support to the phone which can make plugging in an adventure, so there are plusses and minuses to both methods. The spring mechanism on this unit is pretty strong, so it will do the job.

Overall, this is a pretty inexpensive way of getting use out of your CD slot – or any other crevice in your dashboard. The build quality is great and it’s a solid buy at $12 on Amazon. Comparable units run for almost twice the cost. Once you set your phone into this cradle, it’s not coming out for anything. Everything about this mount is solid and feels sturdy. So if your CD player is gathering dust, spend a dozen dollars and put it back to work.

This product will be featured in an Amazon Lightning Deal on December 11 between 2:50 and 6:50pm PT.

Apple is said to benefit from the new PLI conditions as its contract manufacturers Wistron and Foxconn could soon be shifting a significant portion of iPhone production to India.
YouTube 1.8M
Facebook 569K
Twitter 196K
Instagram 133K
RSS