Mobile device sales reports for the final three months of last year are starting to come in, and just like Apple, Samsung may have reason to be both proud and worried about what happened in the industry during Q4 2017.

The world’s top two smartphone vendors most definitely retained their places on the global podium between October and December, but iPhone X shipments were slightly below expectations, and the chaebol’s “Galaxy” was defeated for the first time in a while in a very important market.

Even though Samsung achieved 17 percent annual growth in India, according to Canalys stats, Xiaomi maintained its remarkable recent progress rate in the world’s second-largest smartphone market, surging to quarterly shipments of 8.2 million units.

That was enough for a commanding regional share of 27 percent, compared to “only” 25 percentage points and 7.3 million unit sales for the Korea-based manufacturers of the Galaxy S8 and Note 8.

Unsurprisingly, Samsung’s loss is mainly blamed on the company’s “inability to transform its low-cost product portfolio.” But Xiaomi deserves praise not just for undercutting the competition’s low to mid-end handsets. Its “persistence paid off” only three years after entering the market, largely thanks to the autonomy granted to the Chinese OEM’s Indian unit. 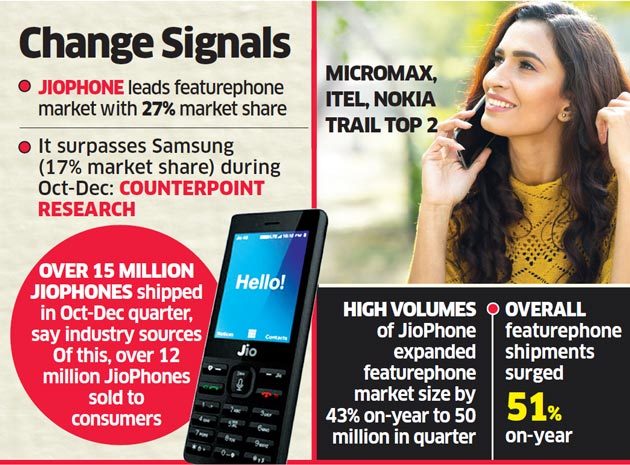 A single 4G LTE-enabled JioPhone model was enough to beat Samsung’s entire portfolio of rudimentary feature phones, at 27 vs 17 percent market share. That may not be a high-margin business, but no one likes to lose a contest that once seemed so easy to win.