In-app purchases have been a part of gaming for some time now, but recently there has been an emergence of temporary “boosters” for permanent money.
Published 04 January 2015, 12:30 EST

One phenomenon that I’ve taken a lot of interest in recently is the concept of the in-app purchase, specifically as it refers to gaming. I’m no stranger to the concept of the in-app purchase. Many games will allow you to play for a certain amount of time and then ask you to purchase the “full version” or purchase the next level, etc. But recently, these in app purchases have taken a twist, and I’m honestly not sure if this is a good thing or a bad thing. That’s where this week’s debate comes in.

For the record, I’m not referring to permanent purchases. In-app purchases that unlock a game, or unlock levels for all time don’t bother me in the slightest. Mostly because it is a one-time purchase and you know what you’re getting in return. Then you’re faced with the thought, “I’ve played the game for this long, and I’ve enjoyed what I’ve seen so far, so yes, I would like to continue playing.” That is simple. 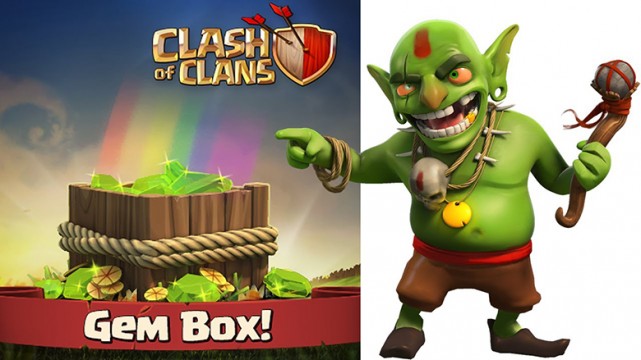 I started playing Clash of Clans recently. For those not familiar with the game, it’s a Warcraft-style game (original Warcraft, not World of Warcraft) where you build up a town, and troops and defend your town against the oncoming hordes while at the same time joyfully raping and pillaging other players’ towns for resources. It’s fun for the whole family.

A major limiting factor in this game is time. Now, back in the Warcraft days, you would have to deal with time as well. A new farm would take a minute to build. A new barracks might take as long as two minutes. It was insufferable really. But with Clash of Clans, that time factor is taken to extremes. Once you pass a certain level, you are literally waiting days for things to build and upgrade. Fortunately, Supercell, the developer behind the app has allowed you a way to bypass that time element and supercharge your builders with green gems. You start of the game with a cache of green gems that you can use to speed up building, or resource mining, or troop training. But what happens when you run out of gems?

I want to be clear. I’m not calling our Supercell here. Clash of Clans is simply the example I’m citing because that’s what I’m using these days. You might be playing a different game that uses a similar model. I do not have a problem with this strategy. App developers need to make money; I of all people understand that. But what I’m wondering is, if you’re like me and don’t want, or can’t spend that kind of money on a game, is that souring the experience?

My money, my call

On the one hand, it’s your money. Spend it how you want. If you can skip a McDonald’s meal and brown bag it to work for a day and buy some gems, who’s to stop you or tell you that you’re wrong? If you want to bust out the corporate card and grab thousands and thousands of gems before the invoice comes at the end of the month and you “have some ‘splaning to do,” Ricky Ricardo style, then that’s your prerogative. Why not give those types of players an advantage over everyone else? Some people choose to eat, others choose to upgrade their town hall. Live and let live, right?

But where does that leave me, the poor gamer who just wants to get ahead but won’t put forth the money to get there faster? Sure, it is my call whether or not I want to spend my money on this game and if I don’t want to contribute to app development, then I can go take a long walk off a short pier right? That’s very true, but for people like me, waiting for eights days just to upgrade a building doesn’t seem all that attractive, and you know what happens to unattractive games? They get replaced. So from an app developer standpoint does that make sense? Apparently Supercell does think it makes sense, and more power to them.

I personally am still playing the game, even as I write this, so apparently I’m not that soured right? Well, I also have two kids and work in tech support. I dare you to find a more patient person than me. But others out there might not be so patient and I have to wonder if this model, which seems to be a model that a lot of games are following, is going to help promote the gaming experience or make it an experience that just isn’t worth the investment, whether that investment is time or money or both.

Your money, your call

So what do you think? Are you like me who has never bought an in-app purchase like this? Candy Crush is another good example of this model (“Just 5 more moves and you could pass this level”). Are you not opposed to buying some green gems in the interest of haste? Are you a fan of this trend with in-app purchasing? For just 99 cents you can comment below…just kidding. Go ahead and put in your comments, free for a limited time (and by “limited” we mean “forever”) and let’s see if we can figure this out.

It seems that we may indeed get a larger display in the upcoming iPad mini, thanks to the removal of the home button and other changes