In A World of Jumbo Phones, Who Needs A Tablet?

Thanks to the ballooning size of the modern smartphone, I’m starting to call into question the usefulness of smaller tablets in my life.

I’m one of those people who uses his tablet in bed. In fact, that was one of my biggest justifications for purchasing an iPad in the first place; bedborne browsing has for years been one of my favorite ways of drifting off. For much of that time, though, it was a cumbersome process. I was either awkwardly chained to a notebook computer, with its accompanying fan-port and form-factor headaches, or confined to browsing on a 3″ smartphone screen- not ideal for eyeballs already weary from staring at displays all day.

Early in the iPad’s quest to popularize consumer tablets, I bought one, and it immediately added a new dimension to my “horizontal browsing time.” Just as capable as a smartphone but not as cumbersome as a laptop, it was the ideal device for bedtime surfing. The addition of Netflix and other entertainment apps further expanded its utility. Sure, it was sometimes awkward to hold, and it hurt a lot more than my Palm Pre did if I drowsily dropped it on my face, but it was better than the alternatives in almost every other respect. The iPad quickly cemented itself as my go-to device, not just for pre-sleep use, but for almost all general browsing and watching. As the iPad -and the tablet in general- has evolved over time, it’s retained that lofty position as my favored device for casual use.

But recently, my iPad and I have been on the outs. The beta build of iOS 6 I’m using didn’t like the taste of a recent update, so half my apps are stuck in a perpetual “updating” status. Also, despite the enhanced feature set of that build, I’m so tired of the iOS interface that I’ve actually started avoiding it.

So the other night, with the iPad basically down for the count and my “backup tablet” -an HP TouchPad that gets less useful by the day- busy being neglected in the sound booth, I took my phone to bed instead. And suddenly I realized what all you Galaxy Note enthusiasts have been gushing about.

The phone in question wasn’t a Note, but it was something close: the Sprint Galaxy S III I reviewed last week. At 4.8 inches across, its display is the largest you can get on a smartphone these days without straying into “phablet” territory, that strange purgatory between phones and tablets in which the Note resides. And to no one’s great surprise, such a large display carries with it some awesome benefits. Benefits that become immediately apparent when your tablets are absent and you need to do some bedtime browsing.

Indeed, when it comes to smartphones, the world’s quite a different place now than it was even two years ago.  When I was bed-browsing on my phone in 2010, I was doing so on a Palm Pre with a 3.1″ display- a little small for the time, but still within the average range. Typical screen sizes today are gigantic by comparison, with 4.3″ and higher quickly becoming the norm. While that’s spearheaded a trend I don’t entirely appreciate, it’s provided a much better user experience in several ways. Most notably, consumption-heavy activities like web browsing and watching videos are much, much more enjoyable on today’s larger smartphones.

And, despite phone hardware growing to truly gargantuan proportions, that trend doesn’t look to be reversing itself anytime soon. At least not as far as Samsung, the popularizer of the phablet form factor, is concerned: we’ve heard it plans to equip its sequel to the 5.3-inch Galaxy Note with an even larger, 5.5-inch panel.

The original Note may have been something of a niche product, but that didn’t stop Samsung from selling millions. Considering Samsung’s winning attitude of late, we can expect its sequel to do at least as well. And we can expect other OEMs to ramp up production of their own phone/tablet hybrids as they chase the same flavor of success.

What that means for the tablet market isn’t clear, but it’s not hard to imagine some sales cannibalization taking place as the line between phone and tablet blurs. Already there’s not much distance between the two: Google made big news recently with its announcement of the Nexus 7, a tablet built to compete with the popular Kindle Fire. Both of those devices, of course, feature displays measuring 7 inches across. That’s less than two inches larger than the phones they’re supposedly augmenting. 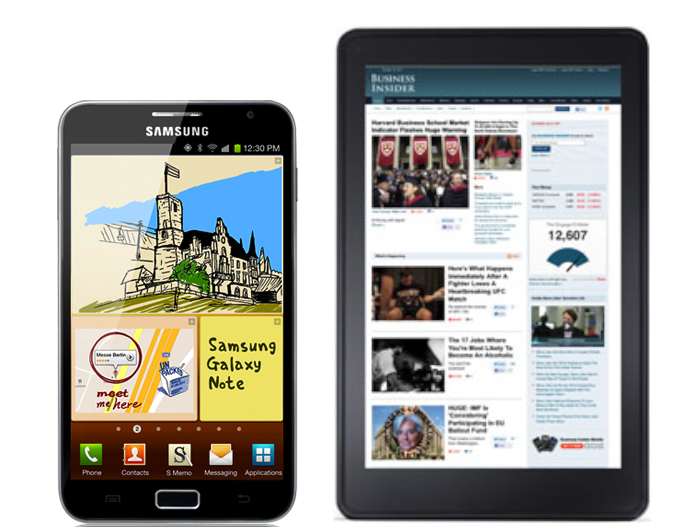 Sure, they’re almost totally different products, with divergent target customers and different price points. But look at this from another perspective: functionally, a 5-inch smartphone is just a more-capable, miniaturized 7-inch tablet. At some point, the tension between these two form factors will drive buyers to make a choice between them.

If you’d asked me before my recent bedtime revelation, I’d have said that for me, the two-device strategy was best: a smaller, more portable phone for enhanced mobility, paired with a tablet for use around the home. Different tools for different jobs. Now, though, I’m not so sure. Despite enhancements in sync technology that have brought us closer to the dream of a “continuous client,” phones and tablets are still separate devices, separate windows into my online world. Each needs its own customization, its own online identity, its own apps. The idea of slimming that device count down to one is appealing. It reminds me of the evolution from separate mobile phones and PDAs to integrated smartphones.

Am I saying that 10-inch tablets are implicated in this as well? No; their extra size insulates them from this crossover question. I’m not even suggesting that 7-inch tablets are in danger of obsolescence, really. All I’m saying is that, thanks to the ballooning size of the modern smartphone, I’m starting to call into question the usefulness of smaller tablets. Not everyone wants to carry around a mammoth phone, of course, and as I already mentioned, I mourn the loss of smaller devices. But the convenience of blending phone and tablet into one large (but manageable) daily device is looking more and more appealing to this hardware collector.

What say you? Do you prefer a smaller phone paired with a tablet, or do you favor one big phablet for your daily needs? Sound off in the comments and let us know why you live the way you do.