iMac and MacBook get juiced, iMac Pro gets teased

The iMac Pro is a compact workstation with huge impacts from AMD for graphics-intensive work. Current Macs, though, get some love, too.
Published 05 June 2017, 14:02 EDT

The 4K and 5K iMac displays will go up to 500 nits of brightness. Dithering is now 10-bit, allowing for 1 billion colors to be displayed.

21.5-inch iMacs can get 32GB of RAM while the 27-inchers are up to 64GB. Fusion drives are standard on all 27-inchers and SSDs will go up to 2TB at twice the current rates. Two Thunderbolt 3 ports will be available.

The iMac 21.5-inch is pulling an Intel Iris Plus 640, pushing 80 percent better benches than the previous chip. The 4K version moves up to a discrete AMD Radeon Pro 555 or 560 with up to 4GB of VRAM. Discrete graphics will pull a 3x multiplier on processing speed. The 5K 27-incher moves to the Radeon Pro 570, 575 and 580 with up to 8GB of dedicated memory.

MacBook Pro also gets upgraded with better graphics and memory. The 13-inch version starts at $1,299, the same price as the 2015 MacBook.

All devices will get the latest 7th-generation Intel Core i processors based on the Kaby Lake chip design. 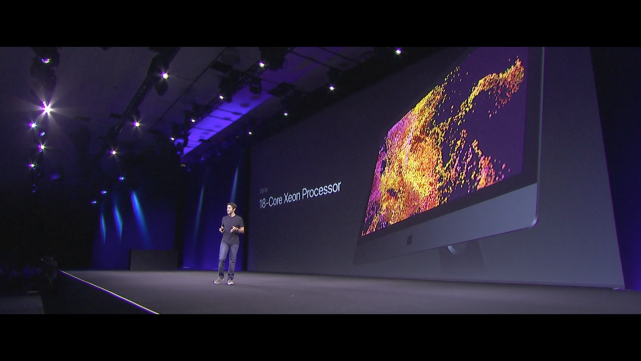 The company is also teasing an iMac Pro. It has a 5K, 27-inch display, but features a new dual-centrifical fan cooling process to compensate for an eight-, ten-, or an 18-core Xeon processor with AMD’s Radeon Vega graphics architecture with up to 400GB/s bandwidth. It’s good enough for 11 Teraflops of single precision compute and double that for half precision. 128GB of ECC will be available along with 4TB of 3GB/s SSD. Four Thunderbolt 3 ports and 10Gb Ethernet will be available for I/O as well as an array of full USBs.

The compact workstation, which would cost about $7,000 on a comparable system, begins at $4,999. Shipping begins in December.

The iOS 13.5 jailbreak doesn’t have any adverse impact on battery life, and neither does it prevent the usage of services such as Apple Pay.

It seems that Apple won’t give us a USB-C port in the upcoming iPhone 12. However, it may also be the last time we see wired charging ports in a new iPhone
YouTube 1.8M
Facebook 569K
Twitter 196K
Instagram 133K
RSS