If you think Windows Phone has no apps, you should try a Mac

There’s one platform who’s app store has been open for almost exactly the same amount of time as Windows Phone’s. How many apps are available in the Mac OS X app store?
Published 25 December 2014, 08:48 ESTUpdated 01 April 2021, 16:54 EDT

Cortana’s live tile on my Lumia 1020 recently showed a news headline that said, “Windows Phone has a massive apps problem“.  Here’s another one that talks about the same thing “Look How Awful The App Situation Is For Windows Phone”  Johanna Stern of WSJ recommends staying away from the HTC One M8 for Windows because of its lack of apps too. That seems to be the general consensus among tech journalists over the past 4 years since Windows Phone’s launch.  Those first two articles talk about the lack of apps that exist on other platforms or the abundance of unofficial apps with official names, but they don’t acknowledge any of the popular Windows Phone apps that do not exist on other platforms.  Apps like Here Drive+, Here Transit, 6Tag, Office Lens, MixRadio, Halo: Spartan Assault, Disqus, etc.

Regardless, the “Windows Phone has no apps” mantra has been around for a long time. It’s often the only excuse that people can think of for not trying Windows Phone.  The problem is, that’s a pretty big myth. Windows Phone has over 300,000 apps available as of August 2014 according to CNET and there are about 500,000 in the combined Windows/Windows Phone stores. That’s a pretty good number. Sure it’s less than iOS or Android, but if you really want to complain about a platform with no apps, you should try Mac OS X. 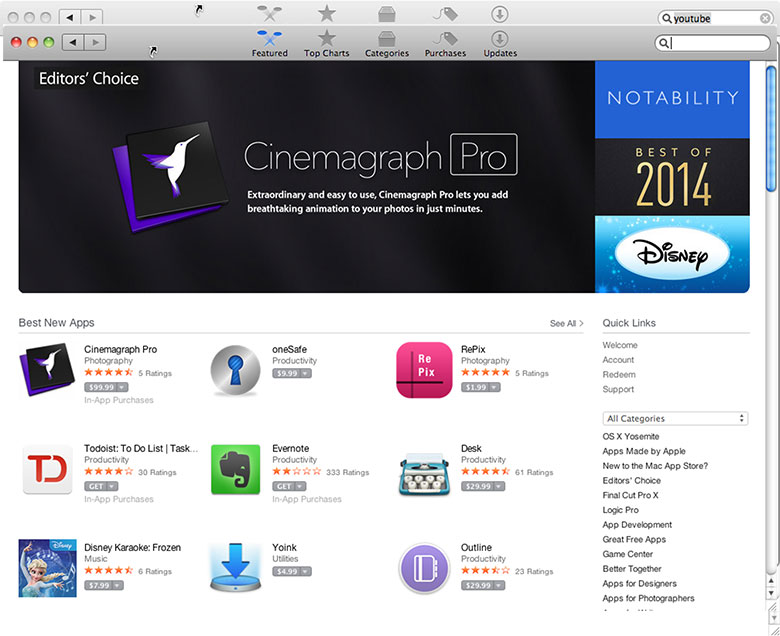 Guess how many apps are available in the Mac OS X app store. Less than 22,000 according to AppShopper.com.  Mac OS X has been around for 14 years, too. Sure the Mac OS app store didn’t launch until 2010, but it does include many apps that started development long before the store was available.

The Windows Phone platform was also launched in 2010 so really the time span for developers to add apps to the Windows Phone store as well as the Mac OS X store are very comparable. With 14 years of developers creating Mac OS X apps, you would think getting all of those into the new app store would generate a really big number. As it turns out, no. The Mac OS X app store is abysmal at least in terms of numbers.

So where are all the articles from tech journalists predicting the death of Mac OS X? Clearly, the app ecosystem is not growing very fast. 22,000 apps in 4 years (or 14 years)? How can anybody think that Mac OS X is a viable platform with such weak developer support? Why are people still buying this product that’s so horrible nobody will make software for it? Why aren’t any of the other news outlets picking up on this? 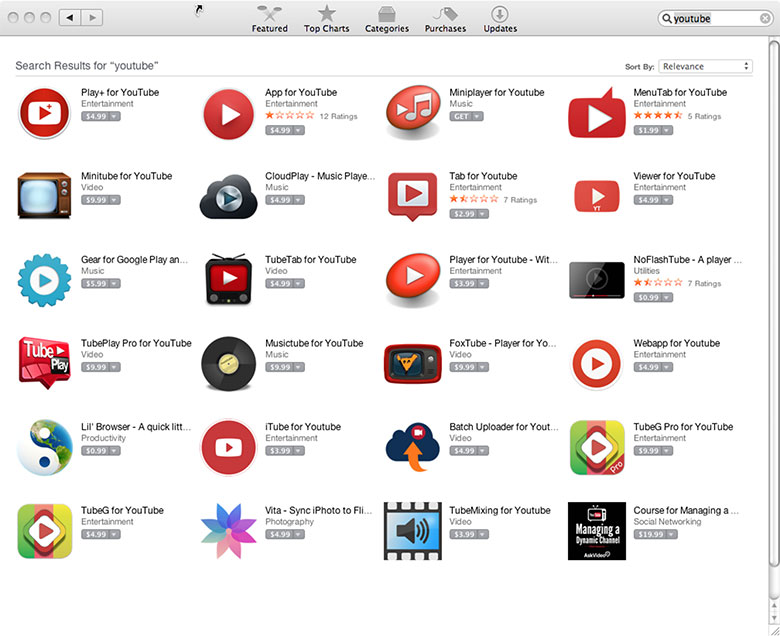 I mean look at this. There isn’t even an official YouTube app on Mac OS X. All you get is this listing of fake stuff. Sure, there’s a web browser on Mac OS X that works okay, but… Oh yeah, that’s true with Windows Phone, too. 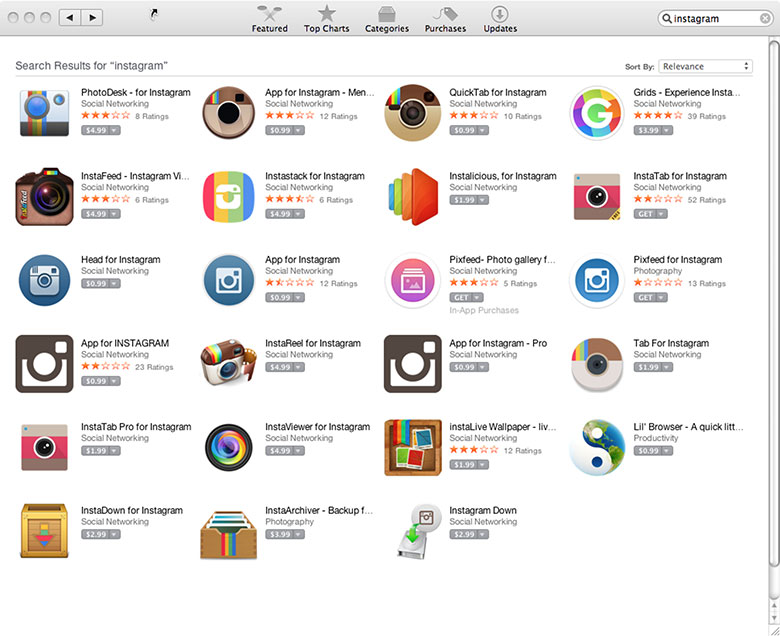 The same goes for Instagram. No official app, just a bunch of fake ones. Don’t even bother searching for Flappy Birds.

You might be thinking, “But comparing Windows Phone to Mac OS X is like comparing oranges and apples.”  Of course it is, and so is comparing the Windows Phone app store to iOS or Android app stores.  At least the Mac OS X app store has been accepting submissions in just about the same time frame as Windows Phone has… thus giving developers about the same amount of time to add their apps to the store’s library. In that sense, Windows Phone is more comparable to Mac OS X than anything else.  Although, Mac OS X does have the advantage of not requiring apps to be in the store in order to install them. Programs can still be installed manually from disks or external downloads, and maybe that has something to do with the lack of apps in the app store. But it’s actually fair to ignore that fact since tech journalists have learned to only go by what’s in the app store on the device when criticizing Windows 8 PCs, too. Otherwise Windows would be considered the largest computing ecosystem in the world.

Why is Mac OS X actually growing then?

How is it that the Mac OS X still exists after 14 years with such a paltry software selection?  What’s that?  Mac OS X’s market share has actually increased despite this? As of 2014, Mac market share in the U.S.A. is 13 percent and globally they’re at 7%.  That’s a lot better than the 4% market share they were at back in 2009, which is pretty close to the market share that Windows Phone has been at.

What’s Apple doing differently though? Well, they’re putting a lot of effort into keeping Mac OS X as part of their ecosystem which has seen much greater success in the iPhone, iPod, and iPad arenas. Mac OS X works great with Apple’s iMessage, Facetime, iCloud, iTunes, iWork, etc. The software and services Apple produces are designed specifically for their ecosystem and only their ecosystem. There’s no Facetime or iMessage for Android. It’s all Apple all the time. Sure that lock-in might suck in some ways, but at least you know that Apple products are designed to work well together.

Microsoft, on the other hand, doesn’t always design its products to work well together and sometimes designs its products to work better with competitor platforms. For a long time Exchange 2013’s Outlook Web Access didn’t work on IE in Windows Phone, but worked great on Android and iPhone. Office Mobile on Windows Phone is feature-wise, pretty pathetic, compared to Office on iOS (or Office Mobile on Windows Mobile 2003).  And Microsoft can’t even synchronize its health products with its own health platforms (See: How many health platforms does Microsoft need?).

People don’t buy computers with Mac OS X because you can run Flappy Birds on it (you can’t). They buy it because of the special features it has that work with other Apple services and products (or because it’s required to run Final Cut Pro… or because it has an Apple logo on it).  Windows Phone has a lot of special features that make it better than other platforms in some ways, too; animated live tiles for websites, app live tiles that auto update with new info yet still fit in an organized layout, the Cortana speech interface that can control any 3rd party app (if enabled by the developer), 41 megapixel RAW DNG photography, speed & stability even on a $35 phone, etc. Microsoft just needs to increase the capabilities of those special features, learn to integrate with/strengthen their own ecosystem, and leapfrog the functionality of the other mobile platforms out there.

Bottom line is, don’t criticize a tool for something it doesn’t do well without acknowledging the things that it does do well. I hate screwdrivers because they can’t cut trees down.

Microsoft has also announced a range of accessories certified for Microsoft Teams. It has launched Surface Headphones 2+ for business as well.

The ASUS Zenfone 8 Mini could feature a 5.92-inch OLED display, which will make it one of the most compact Android flagships on the market.