Huawei Watch hands-on: putting the “smart” back in “smart watch”

With its new wearable, Huawei looks to put the “smart” back in “smartwatch.” Join us for an early look at the Huawei Watch!
Published 02 September 2015, 09:00 EDT

In addition to the modern connotations ranging from “intelligent” to “geeky,” the word smart used to be synonymous with “classy,” “elegant,” and “timeless” – witness the enduring term “smart casual” for sharp-looking business attire. But today, the term “smart watch” conjures images of early adopters at best and technology nerds at worst. That’s how Huawei sees it, anyway, and its first Android Wear device looks to turn back the clock on “smart,” restoring the word –and the category– to a more dignified status. Does the Huawei Watch have what it takes to de-geekify Android wearables? Join us for some hands-on first impressions to get a sense.

Now, if you’re feeling a bit of deja vu as you regard the Huawei Watch, there’s a good reason: we already went hands-on with it last spring, after its official unveiling at the Mobile World Congress in Barcelona. But that device was a mere prototype: it only ran demo software on non-final hardware, and what’s more, we were only given a few minutes to check it out. Six months later, the Huawei Watch is fully baked as it gears up for an official release – and there’s plenty to get excited about.

The list of positives starts with a 42mm casing built from scratch-resistant 316L stainless steel, rated to IP67 for water- and dust resistance. It’s available in three finishes: silver, rose gold and black, with the latter sporting a nanocomposite DLC coating that helps keep the watch surface black even when scratched. The watch bands are swappable as well; they’ll be offered for sale separately in both 21mm and 18mm sizes and in styles ranging from fine metal mesh to alligator leather. On the back of the casing is the typical heart-rate sensor; Huawei says its fitness-tracking capabilities are more accurate than any of its competitors, but we’re still waiting for the company to back up that claim with some solid data. Up front, a two-layer sapphire crystal protects the 1.4” display: as on earlier watches from LG and Samsung it’s an AMOLED screen, but at 400×400 it brings a pixel density of 286ppi, 16% sharper than the LG Watch Urbane the Watch vaguely resembles. 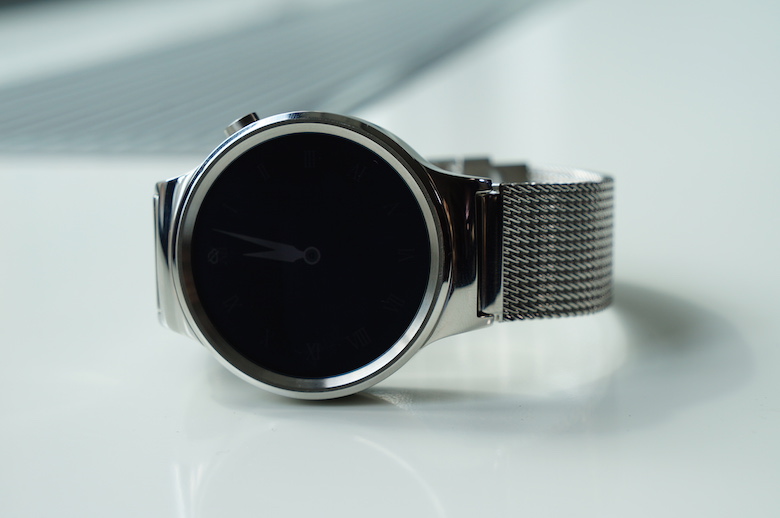 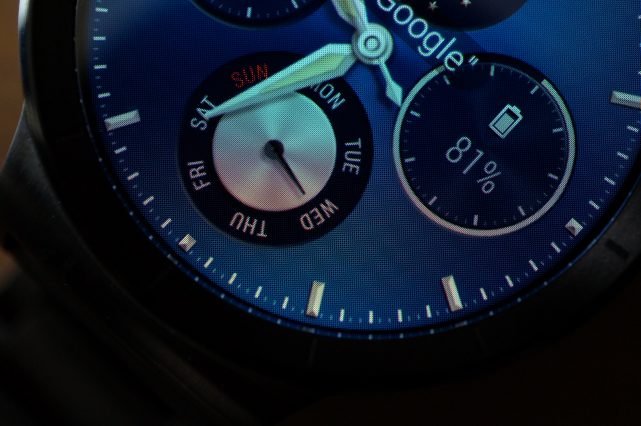 In person, it’s certainly a sharp display – and a sharp watch on the whole. Huawei seems to have tweaked its hardware since the spring, as everything from the casing itself to the various band designs feels more solid. The company is positioning this device to appeal to wristwatch lovers rather than smartwatch fans, and while that seems like something of a far-fetched proposition, it’s obvious that Huawei has worked very hard to construct a high-end wearable here. At 11mm, it’s a little thicker than I’d like it to be, but its all-metal construction and hefty weight on the wrist exude quality. It also comes loaded with over forty custom watchfaces out of the box, and the AMOLED display’s power efficiency means those watchfaces can be left on constantly (in Ambient Mode) and the Watch will still last two days between charges on its 300 mAh battery according to Huawei. Unlike some other watches on the market it doesn’t skimp on the packaging either: the Huawei Watch comes in a big beefy jewelry box that suggests something much higher-end. 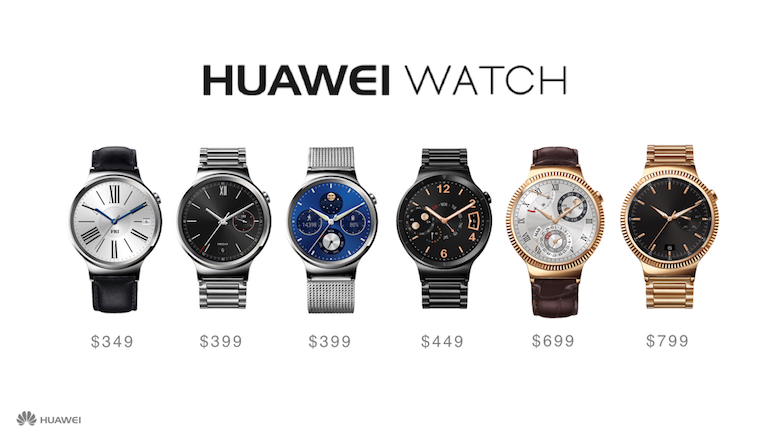 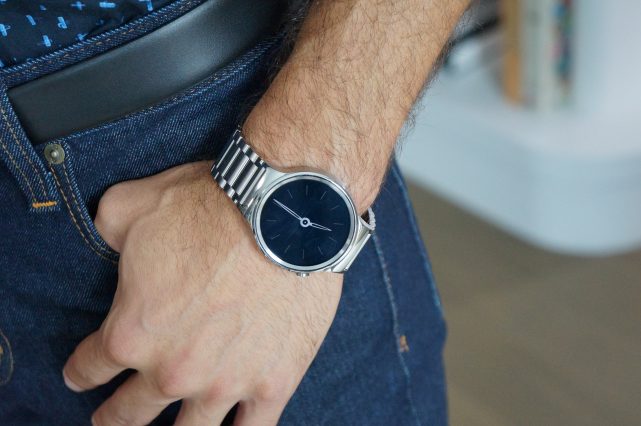 But you’ll have to shell out for that deluxe experience, as Huawei is charging a premium for this accessory. The stainless steel models start things off at $349 or $399 (depending on band choice), with the black Sport trim coming in at $449 and the gold-plated editions scraping the ceiling at $699 and $799. Now, this does align with Huawei’s recent focus on the mid-to-high end of the mobile space, but for that kind of money, I’d expect a nicer charging solution. While Huawei’s magnetic disk is fine, Motorola bundles a very convenient inductive pedestal with its cheaper Moto 360 that allows the watch to double as a bedside alarm clock … and even at launch, that watch carried a price tag $100 less expensive than the Huawei Watch’s cheapest trim. More importantly: underneath Huawei’s fancy casing is a pretty typical Android Wear device (Snapdragon 400; 4GB storage; Bluetooth 4.1/WiFi; 512MB RAM) and despite the company’s assurances that the Watch is “built to last,” it’s anyone’s guess how well this hardware will age when and if Google starts building more capabilities –say, NFC– into its smartwatch platform. Frankly, given the lukewarm public interest in Android Wear devices and smartwatches in general, it’s tough to see how Huawei plans to succeed by charging a premium for what’s essentially fit and finish alone.

Of course, our complete verdict will have to wait for the full review coming later this month – and our brief time with the Huawei Watch has us excited to give it a try. It’s really quite a beautiful little accessory. If you can’t wait –or you already know that the Huawei Watch is the wearable for you– it goes on sale September 17th in the US, with preorders opening today at Amazon, Best Buy, the Google Store and GetHuawei.com.

Today’s deals come from Amazon, where we find the latest Razer Blade 15, the Google Pixel 4 and 4 XL, the Moto G7 and more devices on sale

Check out some of the options to keep your device safe, as we list some of the best cases available for your new Samsung Galaxy Note 20 Ultra