Huawei sets the stage for early June US event

What’s on the menu for the upcoming Huawei US event; might we be learning about the new edition of the P8 that could hit the States?
Published 13 May 2015, 18:16 EDT

It hasn’t even been a month yet since Huawei launched the P8 (along with the P8max and maybe, not really the P8 Lite), its latest Android flagship. But life moves fast in the smartphone world, and the manufacturer already has its eyes firmly on what’s next. We could be learning precisely what that is in just three more weeks, as the company sends out invites to a June 2 event.

As you can see below, Huawei invites us to see what the company’s unlocking next, with promises of showing off “what’s new” and offering some insight into the company’s further intentions for the US market.

Combined with the obscured image of a smartphone behind this cut-out, that sure seems to imply that Huawei has new hardware to show off, but we might be getting ahead of ourselves to call this a launch event. At least, it’s conceivable that the OEM intends to talk about already-launched devices specifically in the context of the US market. That may very well include a new US edition of the P8, just as we heard teased when the P8 itself went public.

If we look closely, we can just make out pieces of a feather being displayed on this hidden handset’s screen, an image that already appeared in P8 press shots. That may not be a slam-dunk identification, but we’ve got a feeling it’s pointing us in the right direction. With under a month to go until this event, we’ve sure got plenty of time to pick up some new clues and maybe just start piecing the rest of Huawei’s plans together. 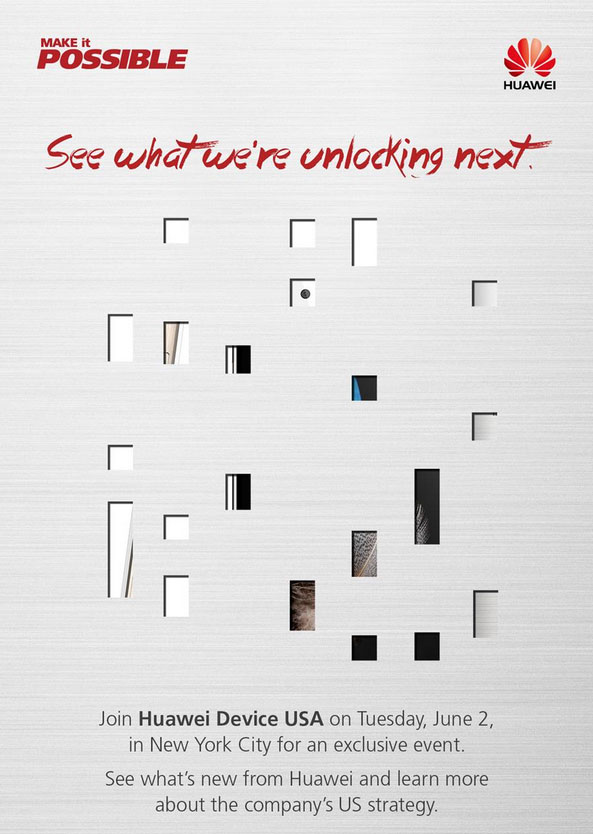