You are so naïve thinking Huawei could be focusing all its R&D and pre-production efforts on the looming 1,080p Mate 8 at the moment. The world’s third largest smartphone manufacturer must be thinking of its near and slightly more distant future, with P9 and P9 Max plans well underway for presumably a while now.

Already, the monumental sequel to the P8 Max (or P8max) unveiled back in April 2015 runs Android 6.0 Marshmallow in testing, which is a great sign as far as its system stability is concerned. A not so great sign? The 73,000 total score posted in AnTuTu by a “P950S” prototype, and especially, the sub-17,000 points tallied in 3D graphics performance.

They say the Mate 8 has come very close to breaking the 90,000 barrier, whereas several flagships from other OEMs that are out and about can top the 20,000 GPU mark, meaning the Huawei P9 Max likely needs major additional hardware – software optimization work.

Luckily, there’s plenty of time for that, as we imagine spring is when we’ll see the P9, P9 Max and possibly P9 Lite rolled out, with the largest version tipped to measure 6.2 inches in screen diagonal and sport 2,560 x 1,600 resolution. 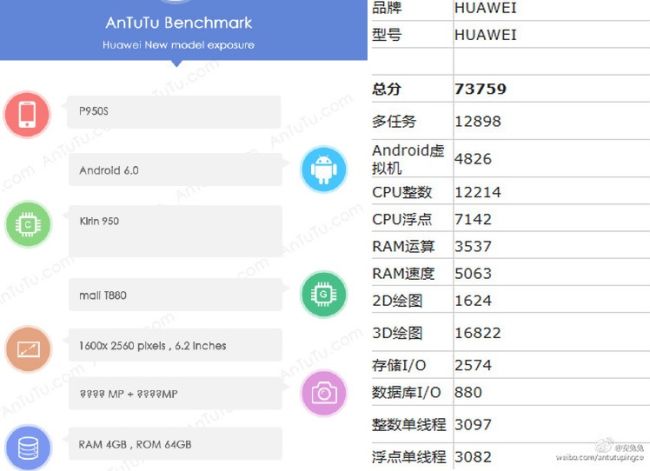 That’s a rather unusual pixel count for smartphones, going by the name of WQXGA, not WQHD, QHD or Quad HD, all three latter monikers designating 2,560 x 1,440 res. The Nexus 10 and a host of Samsung slates, including the first-gen Galaxy Tab S, delivered 2,560 x 1,600 pixels for ultra-sharp images and smooth 2K video playback, making us feel quite optimistic about the P9 Max.