Straight from the Huawei P9 launch: meet the new dual-camera flagships, and see how both the P9 and P9 Plus give users great control over photo-taking.

Dual-camera smartphones are no longer quite the novelty they once were, pairing multiple sensors to capture additional image data. That data can be used to produce higher-res pics, allow for some fancy editing tricks, or just snap shots with enhanced fidelity. But while we’ve seen this sort of thing before, manufacturers have been refining their designs to build dual-camera systems that are more substance than gimmick, and for the past several weeks now we’ve been looking forward to Huawei kicking of the spring season of smartphone launches with a dual-camera model of its own: the P9. Today in London the manufacturer finally goes official with its new flagship, confirming the dual-camera P9 and P9 Plus.

Not that there was any doubt at this point, but both models very much feature that dual-camera element we’ve been expecting. Developed in conjunction with camera-maker Leica, the system employs a pair of 12MP sensors, one for gathering typical color data, and one monochrome sensor designed to add extra detail and excel in low-light environments. Users can even choose to shoot with that monochrome sensor alone for some classic B&W pics.

Super-speedy focus times are possible due to a combination of standard contrast detection, laser range measurement, and dual-camera depth analysis, helped along with a dedicated depth measurement chip. And in addition to all these high-end rear camera features, the both phones also pack an 8MP front-facer. 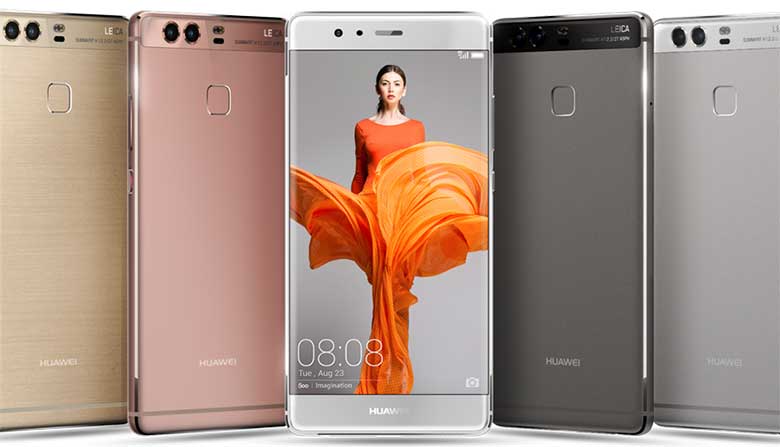 The camera may be the stand-out component of the P9 and P9 Plus, but there’s a lot more to these phones. The P9 offers users a 5.2-inch 1080p LCD screen, while the P9 Plus pushes that up to a 5.5-inch OLED panel. They’re both powered by octa-core Kirin 955 SoCs, feature USB type-C connectivity, run Android 6.0 with EMUI 4.1, and measure a hair under 7mm thick.

Huawei’s making the P9 available in two main configurations: one with 3GB of RAM and 32GB storage, and one with 4GB RAM and 64GB storage. The P9 Plus is only available in a single 4GB/64GB setup. The larger phone also packs a 3400mAh battery, while the standard P9 gets a 3000mAh component. Huawei further gives the P9 Plus rapid-charging dual-IC support, letting users talk for six hours after just a 10-minute charge.

Pricing starts at just about 600 EUR for the 3GB/32GB P9, going up to 650 EUR for the 4GB/64GB model, and topping out at 750 EUR for the P9 Plus. Availability for both models commences on April 16 in markets in Europe and the Middle East.