Learn more about the recent Huawei P8 promo posters that just got leaked, and show us what to expect when it comes to color variants.

Whether you call it the Huawei Ascend P8, or you follow most of the rumors that have called it simply the Huawei P8, this is the company’s next flagship, and there’s a lot to look forward to on tomorrow’s event. We recently saw some leaked renders of the design, and even a separate list of specs that claim that we could expect as many as three different variants. Today some additional leaks of promo material reveal more.

First of all, the new promo material leaked shows us that the previous renders we found were correct; this is definitely a premium device, at least in its design. A new thing we learn today is that the device may be launched in four color variants, and even though it’s hard to confirm these specifically, they seem to black, white, silver and gold. Other data reveals that the panel used for this device will be of the 2.5D type, providing tapered edges that similar to what we see on the iPhone 6.

We’re just a day away from Huawei’s event, and we’re almost certain that this is what the event is all about. 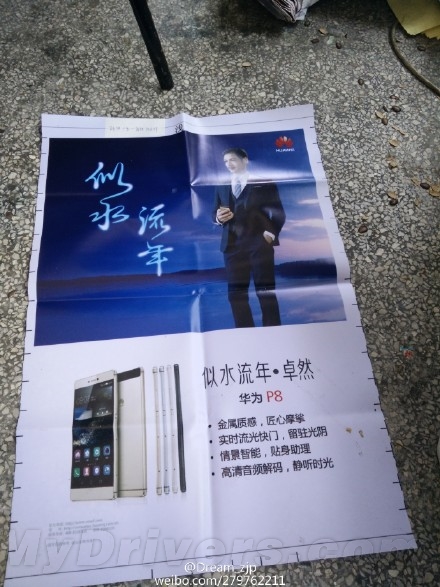