Huawei P8 hands on: a familiar face gets a little lift

A super-thin chassis; a stabilized camera; a redesigned antenna. See what else Huawei’s bringing to the 2015 smartphone space in our Huawei P8 hands on!
Published 15 April 2015, 11:09 EDT

We’re no stranger to Chinese telecom giant Huawei. About three years ago, we concluded our Ascend P1 review with the remark that the Huawei phone, while imperfect, made us excited for what the company had in store for the future – and that excitement has since proven justified. Last year’s Ascend Mate 2 brought outstanding battery life and a competitive price point; its followup the Ascend Mate 7 blended luxury design with top-tier features; and the forthcoming Huawei Watch seems poised to class up the Android Wear catalog when it drops later this year.

The Huawei P8 is the latest volley in the company’s battle for attention and market share in the crowded high-end Android segment. The company says it’s targeting the same kind of buyers who might consider a rival flagship like the Samsung Galaxy S6 or HTC One M9, and that’s evident in more ways than one. Huawei invited me to take a look during a Huawei P8 hands on briefing ahead of today’s unveiling; while I wasn’t allowed to take photos or video (we’ll add more media as it becomes available), I did come away with some first impressions. 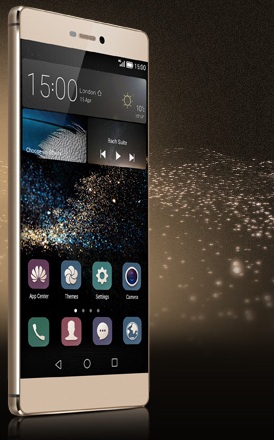 The P8 (no “Ascend” this time) comes in a choice of two colors. Whether you go for Mystic Gold or Titanium Gray, you’re getting the same industrial design: a smooth, cool metal casing with pronounced right angles and an all-glass face, complimented on the back side by a smaller glass window up top containing the camera. The resemblance to last year’s Ascend P7 is strong: if you picture a thinner Sony Xperia Z2 with steel sides and back, bisected by subtle antenna-channel stripes, you’ve got the basic idea. There’s a squared-off power/standby toggle under the volume keys on the right, alongside two nano-SIM slots. In the same tricky bit of engineering we saw on the Mate 7, one of the SIM trays doubles as a MicroSD card slot, allowing you to boost the onboard 32GB storage to a maximum of 128GB should the need arise.

The display’s specs aren’t going to set any records –it’s the fairly typical 1080p at 5.2 inches– but with a pixel density of 423 ppi, it’s more than sharp enough to stay competitive with the likes of the iPhone 6 and the HTC One M9, both of which have sensibly eschewed the modern trend toward insanely high resolutions. In person, the screen is quite beautiful with the wallpapers Huawei has loaded out of the box. Its panel is laminated to the cover glass and provides excellent side visibility as a result.

Huawei wants you to be equally impressed with the photos you snap with the P8, so it’s spent plenty of time honing the camera hardware as well. The 13MP Sony sensor with an f/2.0 aperture and a dual-tone LED flash is pretty typical stuff, but here it’s been enhanced with Sony’s RGBW color filter array and optical image stabilization capable of compensating for orientation changes of up to 1 degree (by comparison, Huawei says most OIS rigs in comparable devices can handle up to 0.6 degrees of shift). These changes are meant to bolster the P8’s low-light shooting capabilities, an effort helped along by a software setting called Super Night Mode that forces longer-exposure shots when needed. Sadly, videos are capped at Full HD and 30fps.

There’s no hardware camera key, but as with some earlier models you can double tap the volume-down button to fire up the camera and automatically capture a photo once it loads. The software also provides for a new multi-dimensional panoramic setting that recalls Google’s Photo Sphere, and on the front side there’s the tentatively-named “Perfect Me” mode, which can discern your face from a stranger’s in order to apply your preferred skin-smoothening beautification setting when you’re the one taking the selfie. Unfortunately, there’s no wide-angle lens on the f/2.4, 8MP front-facing camera, so “Groufies” will likely be more cramped than before.

There’s not (yet) much to tell on the software side –in our limited testing the P8’s Emotion UI version seemed much like older builds– but it ran fluidly on Huawei’s new Kirin 930 processor. As has been reported elsewhere, that SoC appears to be a fusion of four 2.0GHz Cortex A53E high-power cores with four 1.2GHz Cortex A53s, and here it’s backed up by 3GB of RAM. While that sounds like plenty of power, keep in mind that the Kirin 925-powered Ascend Mate 7 wasn’t without its performance hiccups, so we’ll have to put the new phone through its proper paces before rendering a verdict.

Other improvements come in surprisingly subtle areas. Huawei has improved antenna performance through a combination of hardware and software upgrades, resulting in a phone that connects to the cellular network a claimed 33% faster than the fastest competition at boot-up. High-speed handoffs have also been improved, meaning the P8 should have an easier time holding on to signal when you’re speeding down a highway or a train track, and there’s now better discrimination between WiFi and cellular signals so you should better be able to avoid the dreaded dead zone.

The Huawei P8 won’t be coming to the US in its current form –that distinction is reserved for a similar model hitting open-market (unlocked) channels next month– but with such a slim design, high-powered internals, and a camera built to do serious battle with the competition, we’re very much looking forward to reviewing it when it lands in our labs in the coming days. Stay tuned for more, and let us know what you most want to know about this device: leave a comment below.

Looking for the skinny on the rest of the high-end Android landscape in the first half of 2015? Check out our full reviews of the Samsung Galaxy S6, HTC One M9, and LG G Flex 2 – and tune in to our weekly podcast, where we talk about all the latest gadgets to cross our review desks every single week!