While last year’s Huawei P10 and P10 Plus were not interesting enough to warrant the full teardown treatment from iFixit’s repair specialists and smartphone torture enthusiasts, the triple camera setup of the all-new P20 Pro definitely requires some explaining. The Chinese OEM is obviously using all its advertising force to hype up the revolutionary imaging system, but it’s probably best to visualize the three rear-facing shooters by themselves to understand just how unique they are.

Not only are they squeezed in a similar footprint as dual cam solutions from top industry rivals, but they somehow get by with two connectors instead of three, as the main 40MP snapper and monochrome 20MP sensor share a single port. In addition to their engineering magic, a long list of fast focus tricks and many other firsts and records boasted by Huawei, the groundbreaking cameras appear to triple down on hardware-based OIS. 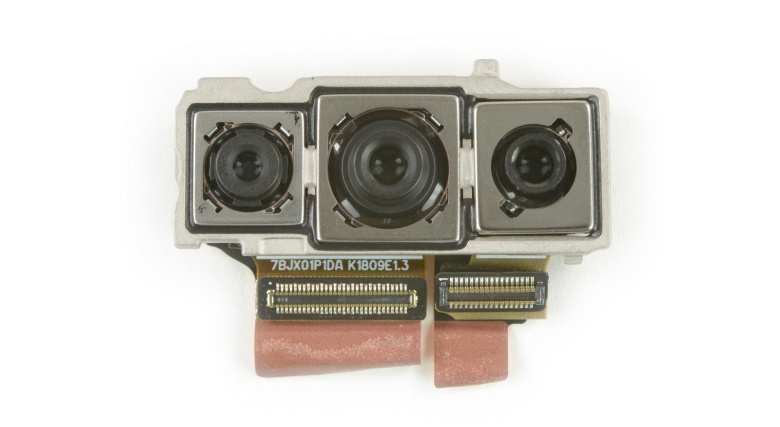 Looks can be deceiving, as the P20 Pro officially supports “true” optical image stabilization on its 8MP telephoto lens only, with the other two relying on software for various effects, filters and scene detection skills.

Unfortunately, as impressive as this bad boy might be from certain standpoints, including that 4,000mAh battery fitted into a slim, relatively lightweight package, one or two build choices are likely to deeply frustrate DIY enthusiasts. For instance, wireless charging functionality is absent, despite the use of crackable glass on both the front and back of the Huawei P20 Pro. Also, while the phone is easy to open, with a number of modular components inside, the screen replacement procedure is a legitimate nightmare. All in all, this device is just as hard to repair at home as the Huawei Mate 10 Pro, Samsung Galaxy S9 or S9+.