Evolution or revolution? We’ve accepted tick-tock strategies from many top tier manufacturers. Apple’s is most obvious, iPhone 6, then the 6S launches a year later. Samsung’s shift from Galaxy S5 to S6 was significant. The move from S6 to S7 was focused on refinement. Yet, when other manufacturers adopt similar strategies, we’re apt to be increasingly critical of evolutionary improvements. 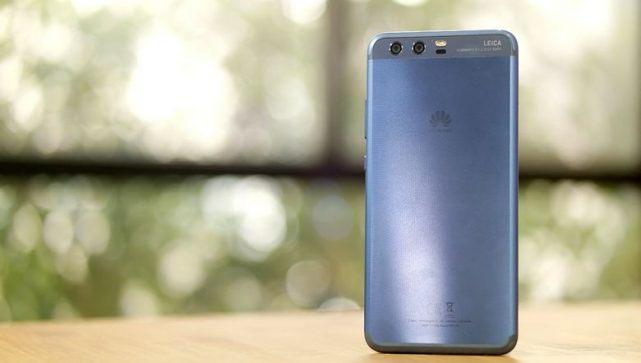 For Huawei this year, both technology and design feel somewhat iterative, but does the collection of smaller improvements in total raise this phone up above the sum of its parts? Let’s take a look at the Huawei P10.

If it feels like we’ve been discussing this hardware for a while now, it’s because we have. The P10 inherits a lot of what we liked from last year’s Mate 9. Screen resolution, chipset, RAM, storage options, and cameras are all shrunk down and crammed into a smaller form factor. For those of us with hobbit hands, it’s a much easier size to use one-handed while on the go. The P10 is just a touch taller, and slightly skinnier, than a Galaxy S7. 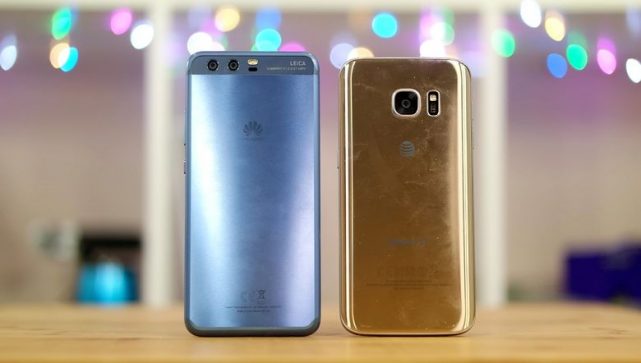 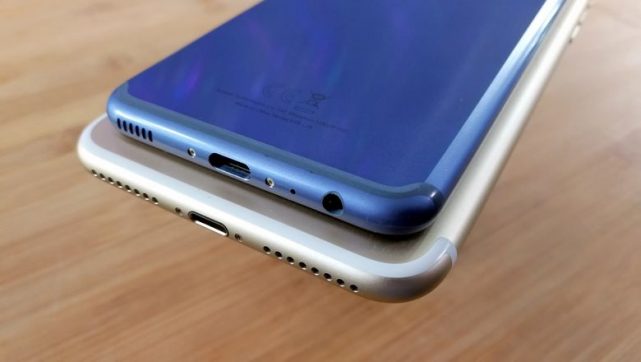 Where the Mate as a phablet is something of a big old diesel truck, Huawei’s focus for the P10 is on aesthetics and design, making it more of a small roadster. The P10 draws some obvious inspirations from other popular phones, rounding corners and softening edges from last year’s more angular P9. Bolder color options are appreciated though, as we’ll be spending our review time with the dazzling blue model. This hyper cut back panel shimmers in sunlight, but achieves the goal of remaining nearly impervious to fingerprint smudges. It’s a refreshing change of pace from glass back phones, and helps with just a bit of additional grip over traditional aluminum rear cases. 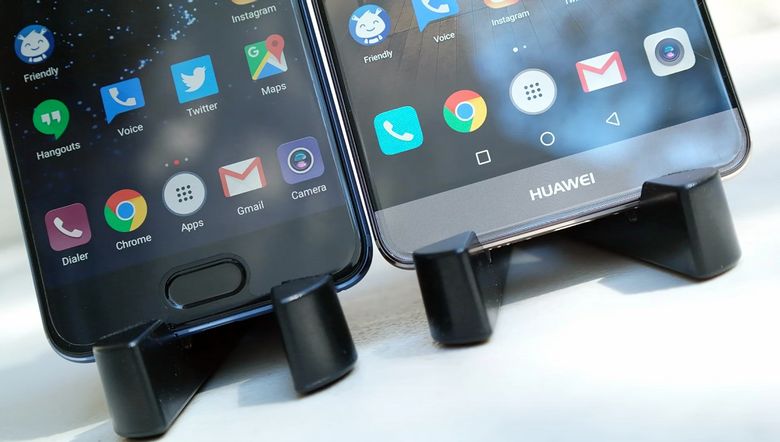 One of the larger departures from previous Huawei phones, the fingerprint sensor moves to the front bezel. It requires more of a reach to unlock than rear mounted sensors, but it also doubles as a one stop shop for navigation. A single tap is a back button, long press will take you home, but the gesture swipe to use multi-tasking is the hardest piece of muscle memory to reprogram. Going on week two with this phone, I still miss this gesture about half the time I try it. 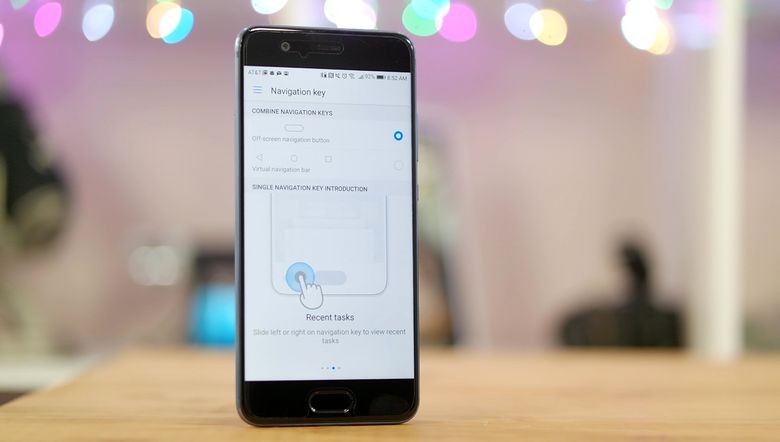 At any time, you can just swap back to normal on screen controls, sacrificing a few pixels at the bottom of your display. 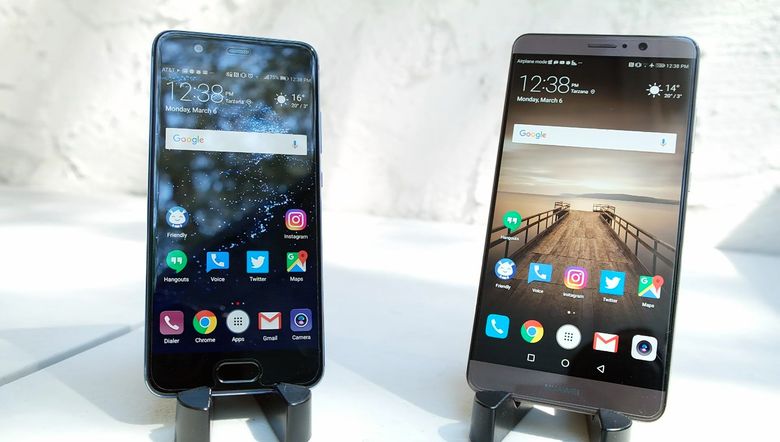 We’re treated to a properly usable 1080p display. The HD resolution looking sharp enough at this 5.1” screen diagonal. Color and contrast are well represented for an LCD, and the brightness is competitive for a phone in this tier. In our basic Lux testing, the P10 edges out the LG G6, while falling far behind the burst outdoor brightness mode found on the Galaxy S7. 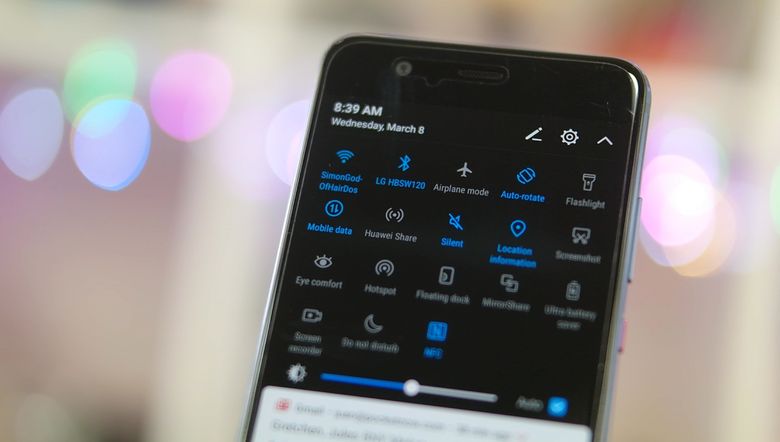 Happily we get another improvement to Huawei’s custom software EMUI. Now on version 5.1, you get options to swap your homescreen from apps to an app drawer, and the general layout for notifications and settings is closer to stock android. There’s still a lot of UI customization, especially to things like confirmation dialog bubbles, but all the pieces are generally where you would expect them to be. We no longer suffer that odd mish-mash of iOS design found in the old EMUI notification shade. 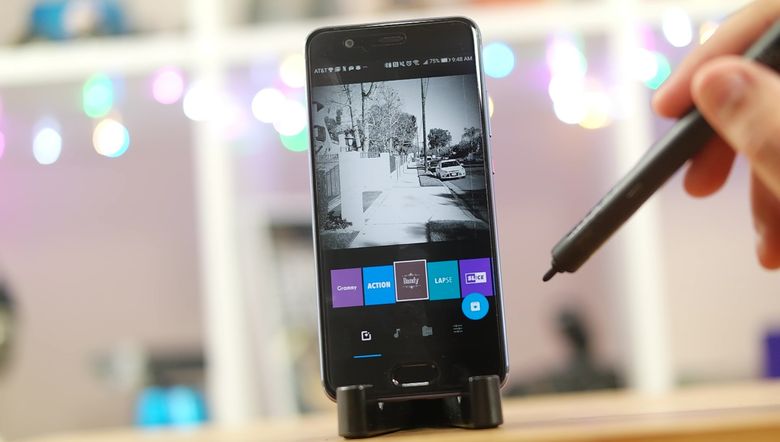 New for the P10, Huawei is promoting a partnership with GoPro, and the new photo gallery app delivers improved tools for editing and sharing videos. Similar to some of the filters and templates you might find in Google Photos or Instagram. It’s a fun add on for folks who like to share short clips with family and friends. 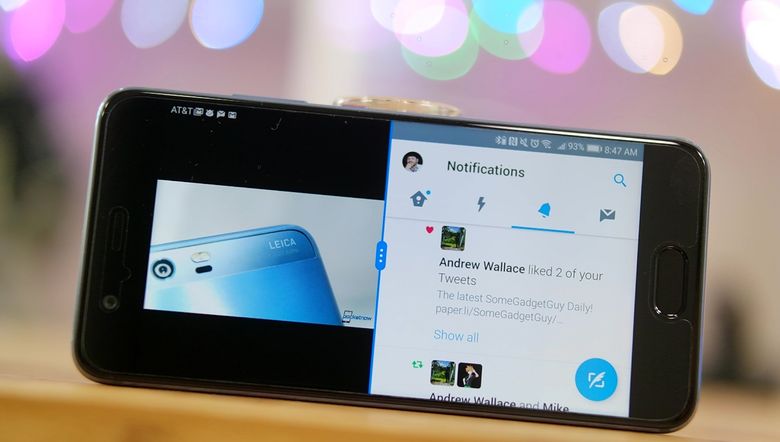 We still get the benefits of Android 7, split screening apps and alt-tab style swapping, though accessing those features takes an additional bit of hunting if you’re using the fingerprint scanner navigation gestures. Nougat improves performance alongside Huawei’s aggressive resource management and garbage collection. Our Mate 9 is aging well in that regard, so we’re optimistic that the P10 will also perform well over time with future updates. 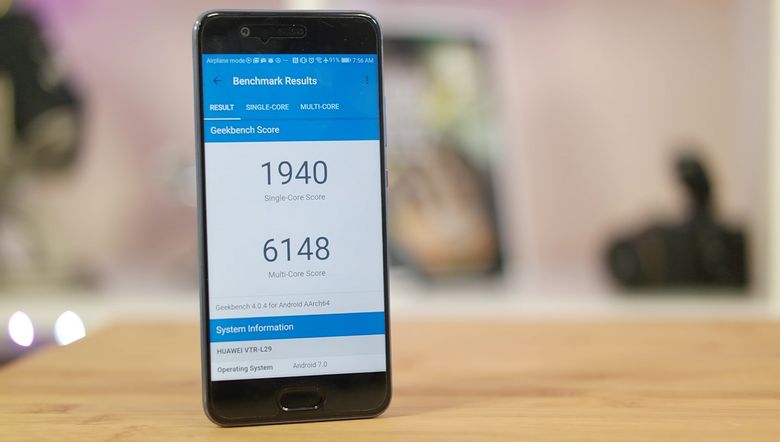 Speaking of performance, we’re still impressed with this chipset. Huawei’s Kirin 960 processor is a screamer, just nipping at the heels of the Qualcomm 835 benchmarks we’ve seen leaked. It easily bests the Pixel and OnePlus 3T with the Qualcomm 821. This kind of horsepower is gross overkill for covering the communication basics, but cranking up some graphics intensive games, the P10 drives Marvel Future Fight very well, probably the smoothest we’ve seen from any Android we’ve reviewed using high quality settings. No small feat for how poorly optimized that game is on Android. Better optimized titles will run like butter. Performance on Implosion for example has been phenomenal. 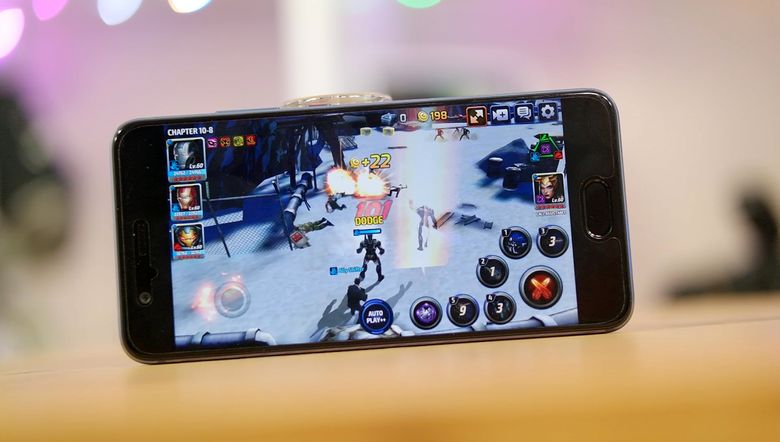 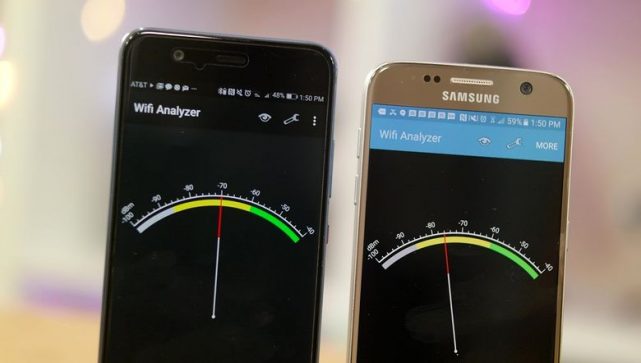 Radio performance is very competitive for a metal phone with antenna bands. We routinely saw LTE performance falling just slightly behind the Galaxy S7, somewhere around 2-3dB depending on the connection to AT&T towers. However, WiFi performance regularly reached farther than the Samsung at the edges of my home network. 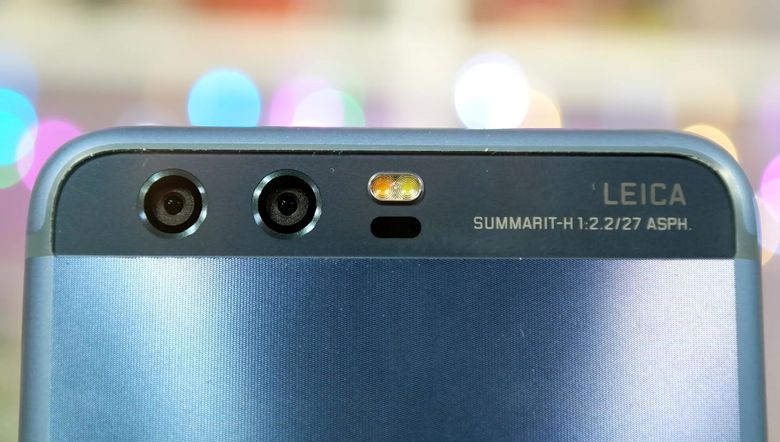 In our early testing, we’d be hard pressed to see significant differences in camera performance between this phone and the Mate 9. Though the camera module is sunk flush with the rear housing, we still have the same dual camera system. A 12MP color sensor and a 20MP black and white sensor work in tandem on all still photos to improve contrast, color, and clarity. Hardware image stabilization on the color sensor improves low light performance and reduces hand shake in video capture. 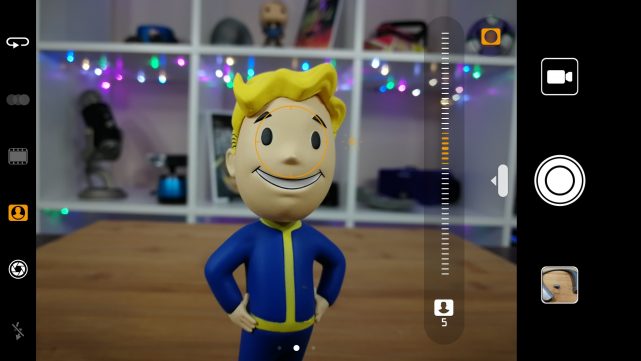 New for this phone, we get a “Portrait Mode” in addition to the terrific Wide Aperture setting. This add on incorporates beauty filters options normally found on the selfie camera. Where the Wide Aperture mode easily bests the background blur options found on other phones, this Portrait mode is a lot more destructive to skin tone at max settings. It also seems to create a harder border around your subject, so we’d recommend using it judiciously, maybe dialing back the effect to around level 3.

We won’t be using this phone to dig deep into a Real Camera Review, but for folks interested in a deep dive, our Mate 9 camera review will cover those bases for you. We’ll try to get our hands on a P10 plus to see how it might differ from this camera.

On the whole, these sensors deliver some of the best still photos we’ve ever seen from a phone, and improvements to video, like h.265 UHD files and image stabilization, are greatly appreciated. There’s been some nay-saying or fear mongering about HEVC video, but we wouldn’t let that concern you as these video files are fairly easy to work with.

Headphone performance is adequate to good. Again, similar in performance to the Mate 9, though with a wider frequency response on 24bit files. We also see very subtle improvements to noise floor and dynamic range, but we’d be hard press to hear any significant differences. Though disabling the headphone DTS mode, we see more EQ tweaking which the user is unable to completely disable. 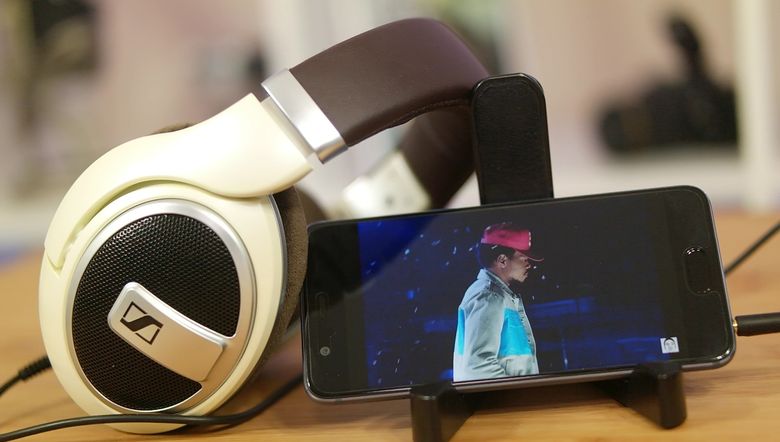 The speaker performance is one of the weaker links of this phone, performing well for notifications, but it’s not going to break any records for music and movie playback. On the whole, it’s unlikely the P10 will make our list of audiophile phones at the end of the year, but it gets the job done well enough for most daily use situations. 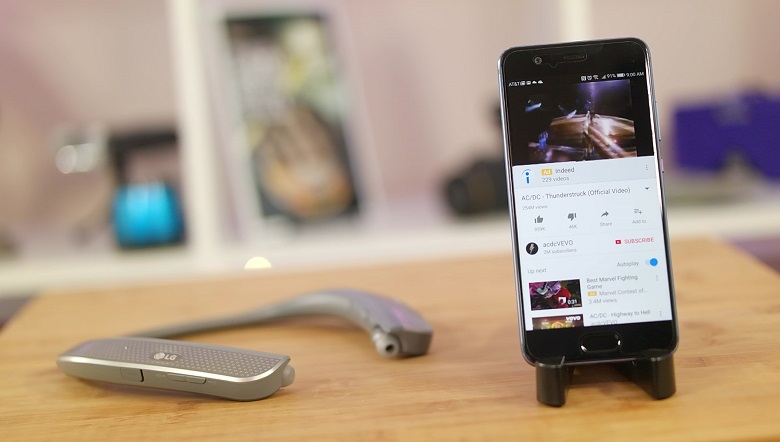 Bluetooth users might also be annoyed at how poorly this phone will hand off the connection between audio accessories. A common gripe on Huawei hardware, if I have headphones connected and get in my car, the phone won’t automatically prioritize the car for hands free calling. Manually disabling one accessory will occasionally lead to the Bluetooth connection locking up, requiring me to manually reestablish the connection in my car’s stereo settings. Not a process one would want to undertake while operating a motor vehicle.

Battery life is very good for this capacity. During our streaming test, the P10 was well competitive against current flagship phones. Streaming thirty minutes of HD video over WiFi resulted in a 5% battery drain. This translated to good daily run time, making it to dinner with moderate use and room to spare. 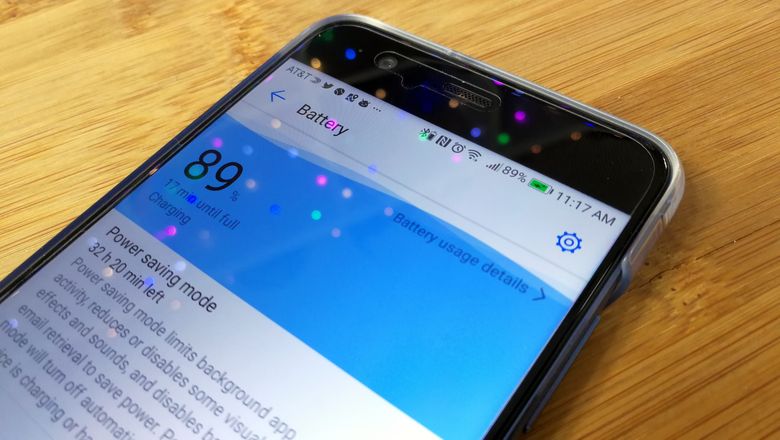 For power users, recharging during the day is made a lot easier with Huawei’s supercharger. A quick top off will easily deliver hours of run time after a short stint plugged in. Only 15 minutes on the charger topped off 19% of the cell. Huawei’s performance here is top tier, and is very impressive for how cool the phone remains while charging. 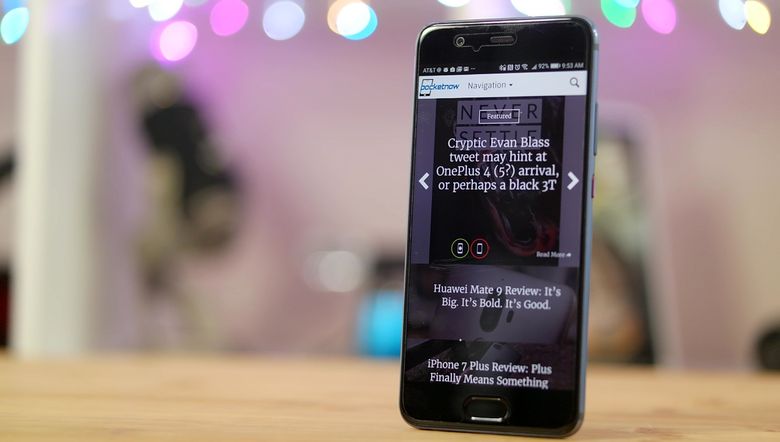 In a way, this phone isn’t really getting a fair shake, as the most immediate comparison people make is against the bigger brother Mate which only just made it to the United States about a month ago. Remembering that this is an update to the P9, nearly every aspect of this phone is noticeably better than last year’s fashion flagship. Screaming performance, better battery life, significantly faster charging, and an evolved camera system. It’s admirable that Huawei packaged all of these improvements while also playing with some new design elements and focusing on fresh color options. 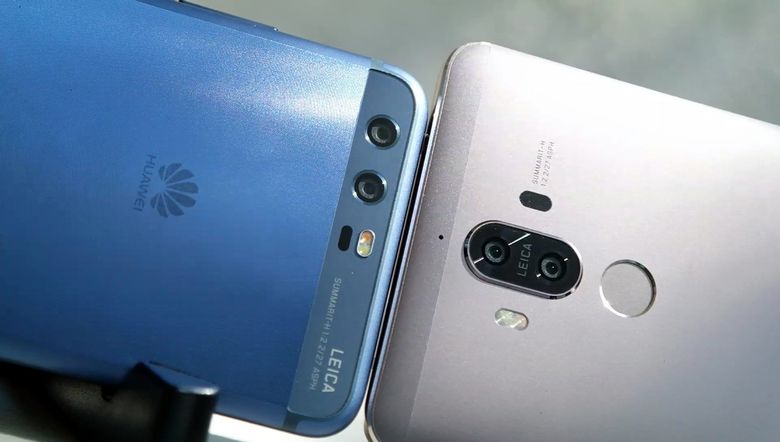 There are precious few compromises to make now. We’re expecting more phones to arrive this year with rated enhanced water resistance for example, and it’s about time Huawei disclose IP ratings for all of their phones. The P10 Plus is rated IPX3, but we have no official confirmation on whether the smaller P10 is even rain resistant. 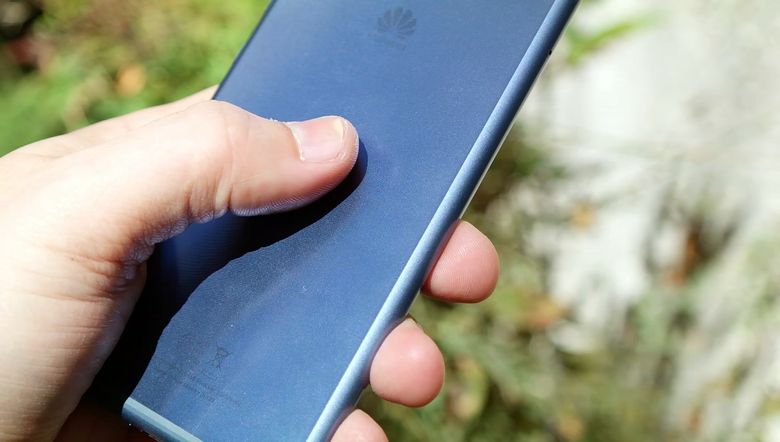 To return to the question at the top of this article, evolution or revolution, it’s curious to see complaints of this phone online “not improving enough”. While we wait for Samsung to eat up the first batch of Qualcomm 835 processors, you can get that power now in the Mate 9 and P10. At the time this review was published, there’s literally no more powerful (non-Huawei) Android phone on the market, and we’re still week away from a proper Galaxy S8 launch. 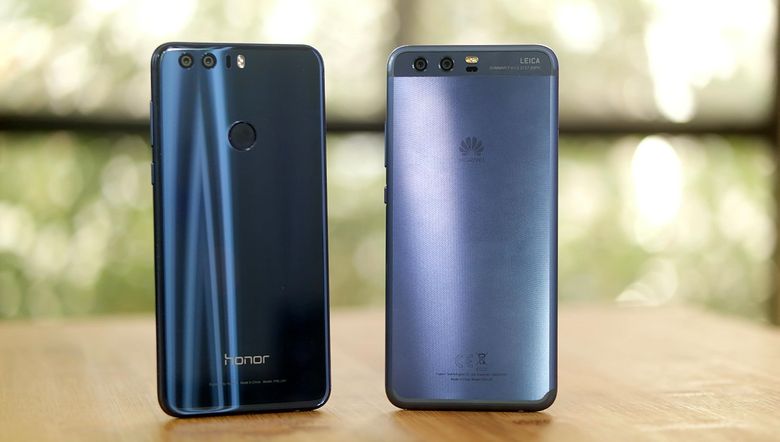 The toughest competition this phone might face is likely to come from Huawei’s sister brand, as we wait to see what the next Honor might bring using these parts and pieces. Until then, the P10 offers a compelling solution for folks looking to shop something different. Personally, it’s nice getting these features in a phone I can use with one hand.