OPPO gave Huawei a bit of a scare in domestic smartphone shipments for the July – September 2017 quarter after sharing domination over the great market back in 2016, but ultimately, the world’s third-largest mobile device vendor came out on top in China when full-year volumes were counted.

It wasn’t an easy overall 2017 win for the company that’s struggling to expand in the US, but according to fresh IDC estimates, national Huawei smartphone shipments reached 90.9 million units, compared to 80.5 mil for OPPO.

That apparently translated to 20.4 and 18.1 percent market share respectively, representing 18.6 and 2.7 percent year-over-year growth in sales. Huawei also prevailed in the Q4 2017 battle, with 21.3 percent share and 24.3 million unit shipments, while OPPO had a bit of trouble fending off bronze medalist Vivo. 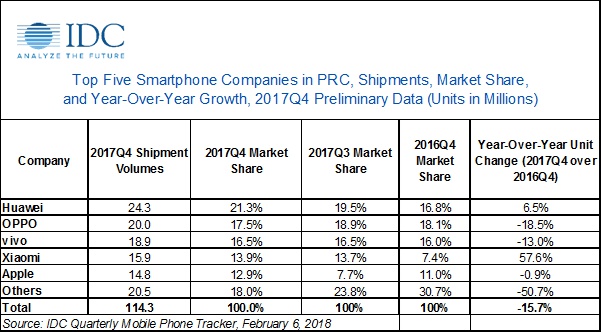 Both BBK-owned brands actually saw their numbers shrink compared to the final three months of 2016, as Xiaomi and Apple surged to 15.9 and 14.8 million shipments respectively.

Xiaomi posted by far the largest growth in Q4 and full-year unit scores, but iPhone performance was nothing to sniff at either. After merely capturing a 7.7 percent share during Q3 2017, Apple jumped more than five percentage points sequentially.

Above all, iPhones were hands down the quarter’s most popular “premium” devices, commanding a whopping 85 percent of overall shipments in the $600+ segment, and thus crucially contributing to the Cupertino company’s impressive global profit scores. Who cares if Apple’s 2017 China shipment volumes were down 8.3 percent year-over-year?