Huawei hasn’t released an upper-tier 10-inch Android tablet in two years, and way more than 12 months have passed since the 8.4-inch MediaPad M3 was unveiled, making the upcoming MediaPad M5 trio a timely if not long overdue affair.

As the anticipation builds, no doubt boosted by the MWC 2018 absence of the high-end Huawei P20 smartphone triad, a tireless leaker/seeker of little-known public information continues to collect puzzle pieces.

Just a little over a week after revealing the codenames, variants and expected prices of the Huawei MediaPad M5 8, 10 and 10 Pro, Roland Quandt is back with a bang… and a quartet of official-looking MediaPad M5 10 Pro product images.

Unsurprisingly, this is basically an oversized M3 with a metal body, decently thin screen bezels, and a fingerprint reader disguised as a home button positioned to the side rather than at the bottom in landscape mode. 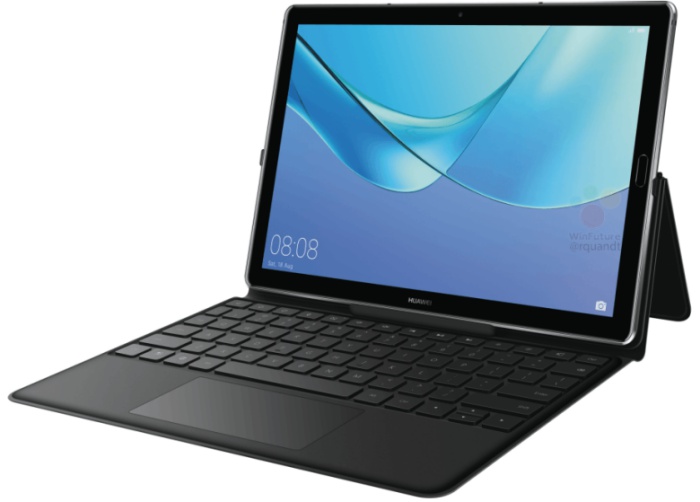 Joined by a large keyboard folio cover in three of the four illustrations, this 10-incher is likely to highlight productivity as an important selling point. Unlike the dedicated keyboard of Samsung’s Galaxy Tab S3, for instance, this first-party accessory includes a touchpad, so although it may not be able to fully replace a laptop, the MediaPad M5 10 Pro will clearly try to come as close as possible.

Reportedly priced at 520 Euro on the old continent with built-in LTE connectivity and M-Pen stylus support, the slate is today tipped to feature 2560 x 1600 display resolution, 4GB RAM, and your choice of 32 or 64GB internal storage.