While we’ve already gotten to take a good look at Huawei’s new laptop, the MateBook X, the real successor to last year’s 2016 MateBook is the MateBook E. It’s very similar to the original MateBook in many ways, but with a few nice upgrades in a few key areas. We had a lot of great things to say about the 2016 MateBook, so it’s pretty exciting to see what Huawei has done with their beautiful 2-in-1 tablet PC this year. Read on for our full review of the new 2017 Huawei MateBook E.

The version of the Huawei Matebook E that we’ll be looking at today is the Titanium Gray model that includes a Blue Folio Keyboard. The MateBook E is also available in Champagne Gold with a Brown keyboard or Champagne Gold with a Pink keyboard.  Our model also has a BL-W09 7th Generation Intel Core m3-7Y30 processor with 128Gb SSD storage and 4GB of LPDDR3 RAM.  Other models are available with a 7th Generation Intel Core i5-7Y54 processor, 256Gb/512Gb SSD and 8Gb of RAM.

The MateBook E has a 12″ IPS screen with 2160 x 1440 pixel resolution which turns out to be about 216 ppi. That gives you a 160 degree viewing angle, 1000:1 contrast ratio, 400 nits of brightness, and 85% of the NTSC color gamut.  The physical dimensions of the MateBook E are 6.9mm x 278 mm x 194.1 mm with a weight of only 640g without keyboard and 1100g with keyboard.  For graphics, you’ve got the Intel HD 615 GPU, and of course there’s all the usual WiFi 802.11a/b/n/ac 2.4/5Ghz 2×2 MIMO and Bluetooth 4.1 connectivity. There’s a 5 megapixel webcam in the bezel for video calls, and dual digital microphones as well as dual speakers. The lithium polymer battery has 33.7 Wh and [email protected] which should provide for about 9 hours of consistent video playback at 50% screen brightness.

We’ve also got 1 USB-C port as your only interface for charging and peripherals. It’s too bad USB-C wasn’t designed to be as forward-thinking as it should have been and there are so many other compatibility issues with USB-C.

By the way, the USB-C charger from the 2016 Huawei MateBook does not work with 2017’s MateBook E even thought the devices are very similar. You’ll have to use the included new USB-C charger instead.  Incidentally, unlike the MateBook X, the MateBook E does not include a USB-C port expander dock or even a USB-C to USB-A adapter although we hear some markets may include those after all. 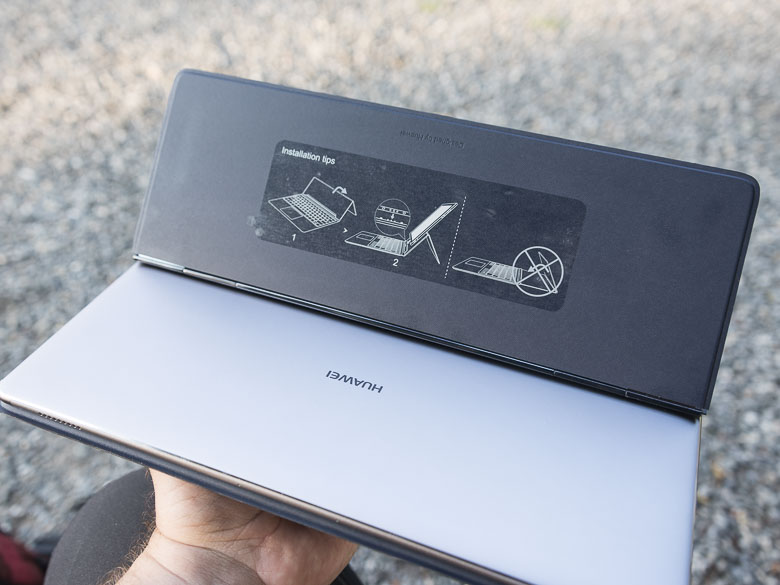 The big difference in the MateBook E over the 2016 Matebook is the new Folio Keyboard cover.  It’s completely redesigned. 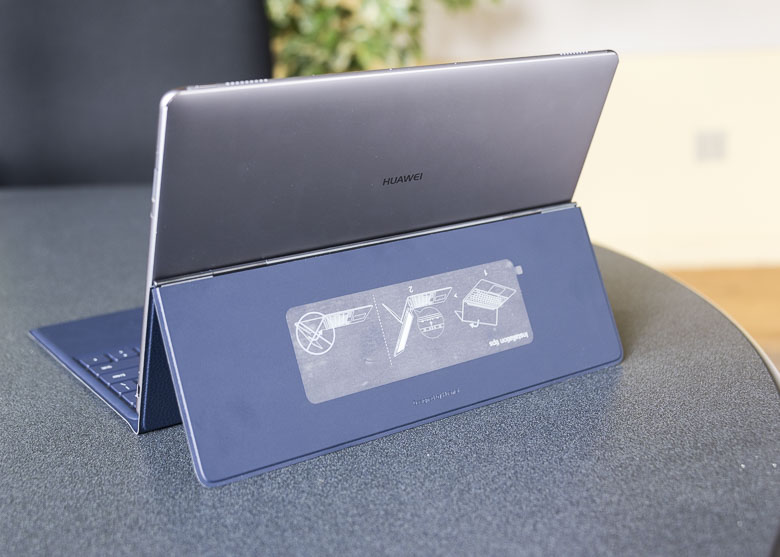 The kickstand is no longer a triangular folding piece. Instead it’s a stiff plastic flap with a hinge that provides enough friction to keep it in place. 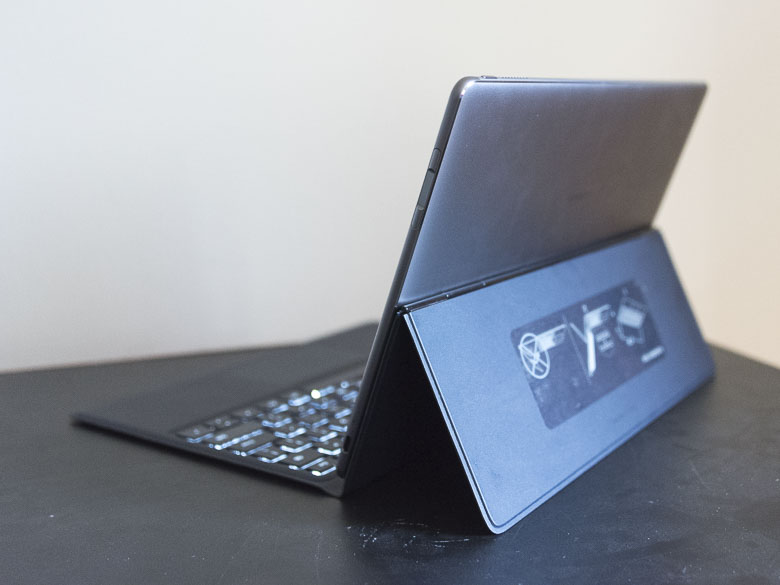 The hinge works quite well, though it doesn’t have as much friction as the Surface Pro’s kickstand hinge. It’s unclear as to whether this may wear out over time and become loose. 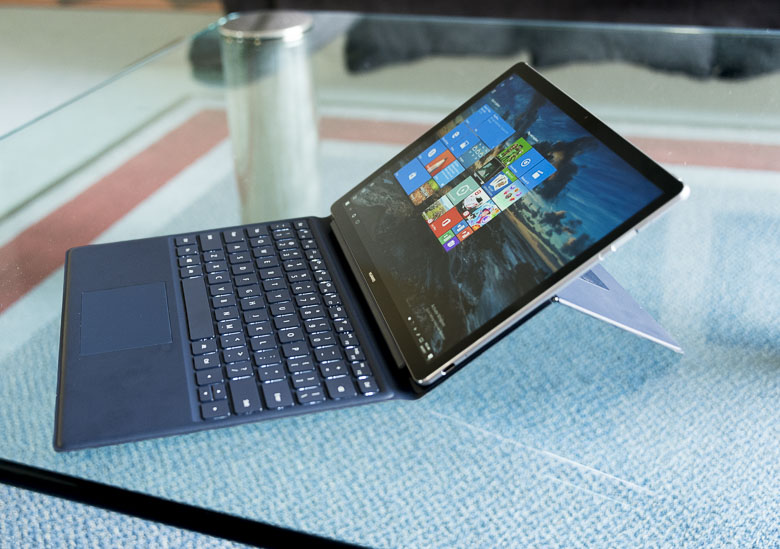 The new keyboard cover’s hinge nicely supports a wide range of display stand angles, so you’ll be able to orient the screen however you choose.

Above you can see the new keyboard cover’s stand compared to the 2016’s MateBook stand.

Again, you can see that you’ll have a much wider range of viewing angles with the new MateBook E Folio Keyboard cover. 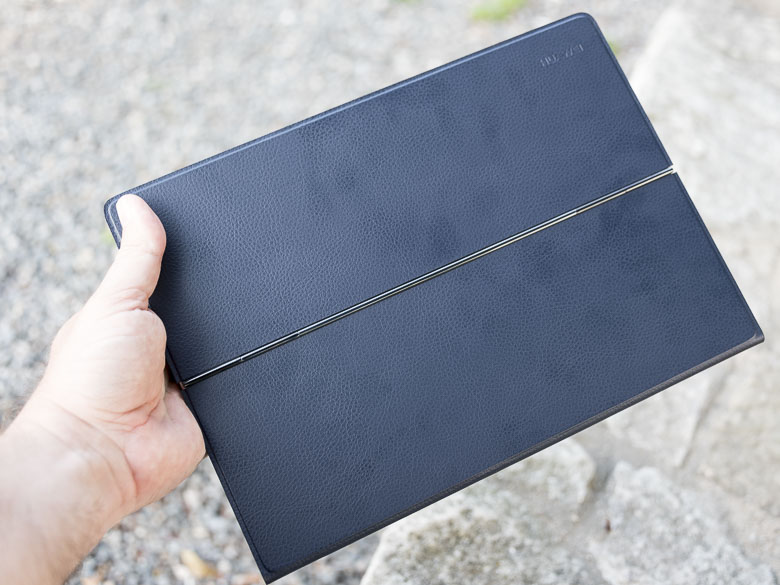 The keyboard cover folds up very easily to protect the 2-in-1 tablet inside, though the faux leather material does tend to attract some fingerprint smudges. 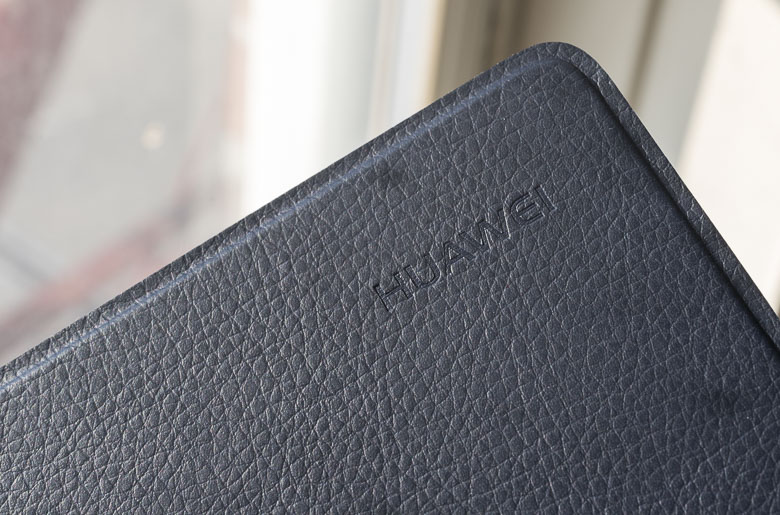 Subtle embossed Huawei logos on both sides of the faux leather keyboard cover are a nice touch. 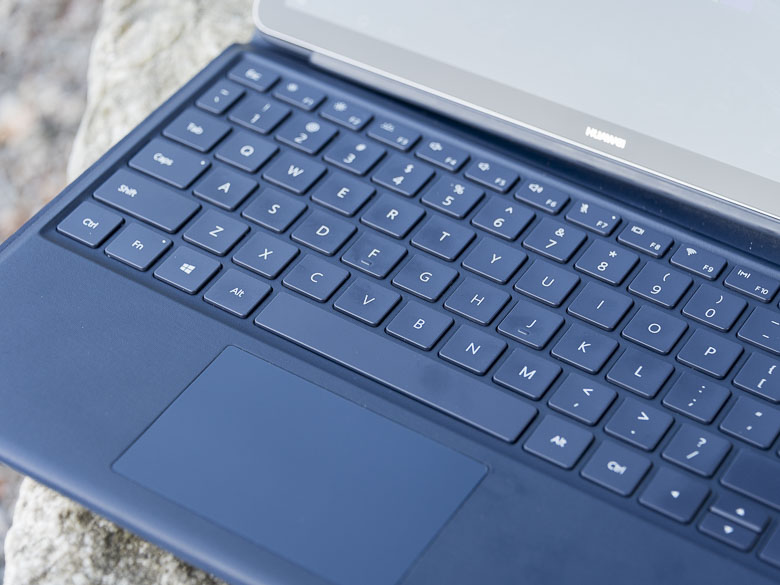 The keys on the keyboard have been redesigned a bit from the 2016 MateBook as well.  These are still chicklet style flat keys, but there’s a lot more space between them so you can feel the edges of the buttons more easily.  They’re not convex or concave shapes though which would be even better for tactile feedback, but the flat keys are popular these days for some reason. 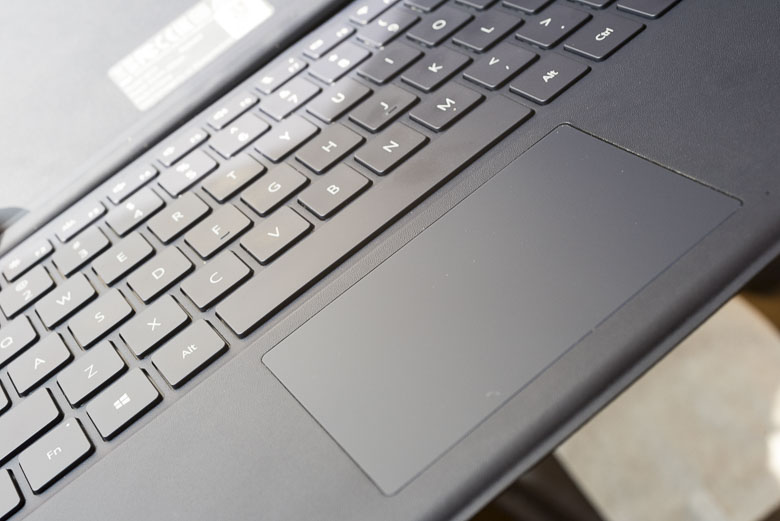 The track-pad on the keyboard cover is a totally acceptable size for a computer with a 12″ screen.  It works just as well as any other track-pad, but personally I prefer the MatePen. 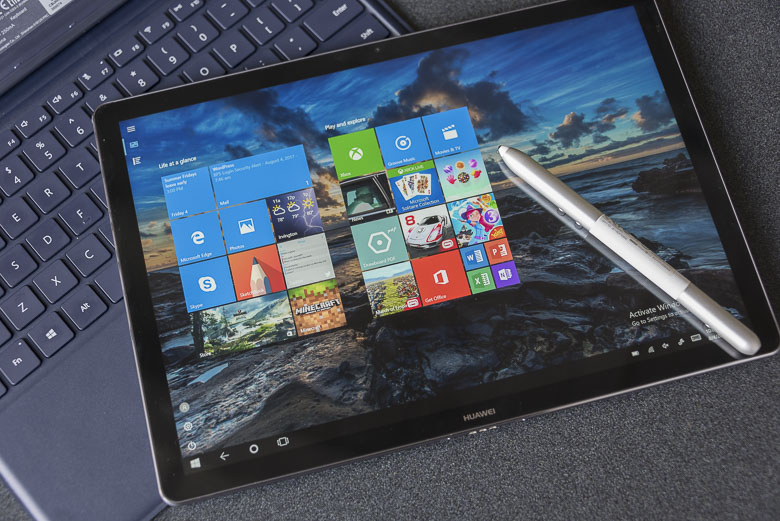 Huawei’s MatePen from 2016 doesn’t come with the MateBook E, but it does still function with it and you should still be able to purchase it separately. 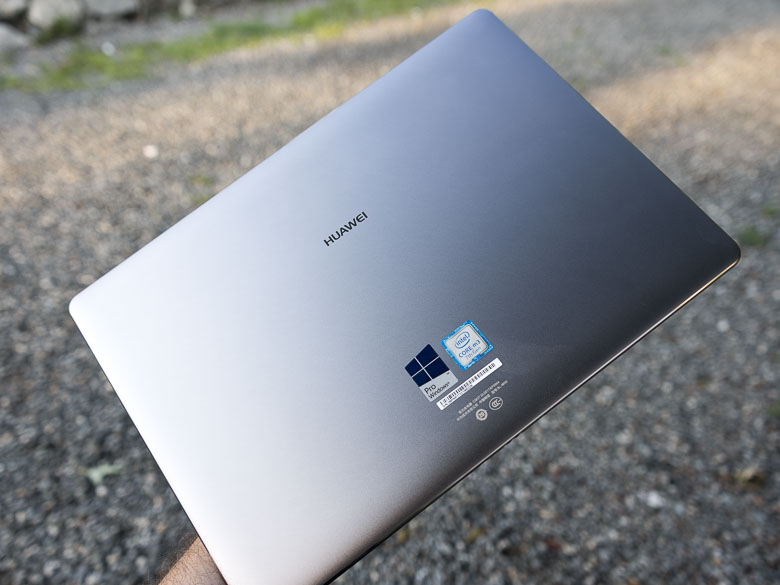 Getting back to the tablet itself, the MateBook E feels exactly like the 2016 MateBook.  It’s beautifully constructed, thin, and durable.  Note that there’s still no camera on the back and that’s a good thing. Nobody should be holding up tablets to take photos. You might want to remove some of those stickers to make it look even nicer. 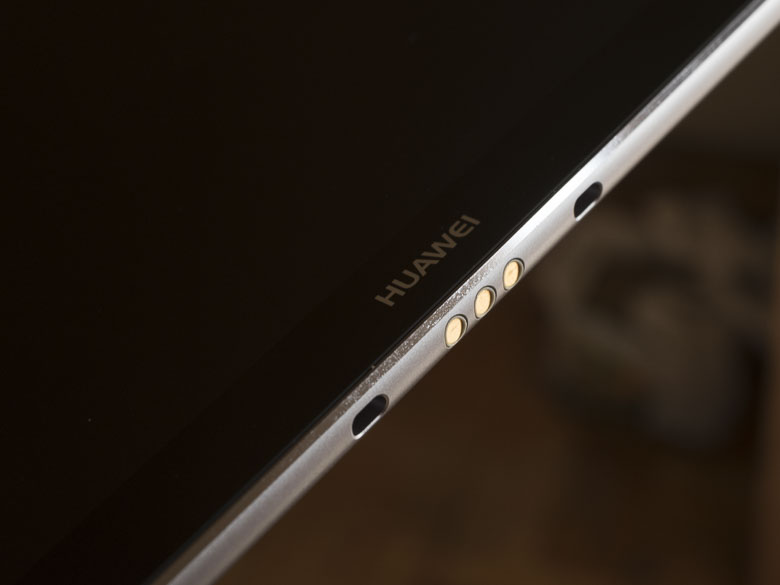 The contacts on the bottom edge where the tablet attaches to the keyboard cover are totally different from the attachment contacts that the 2016 MateBook had, so don’t expect to go swapping keyboards. 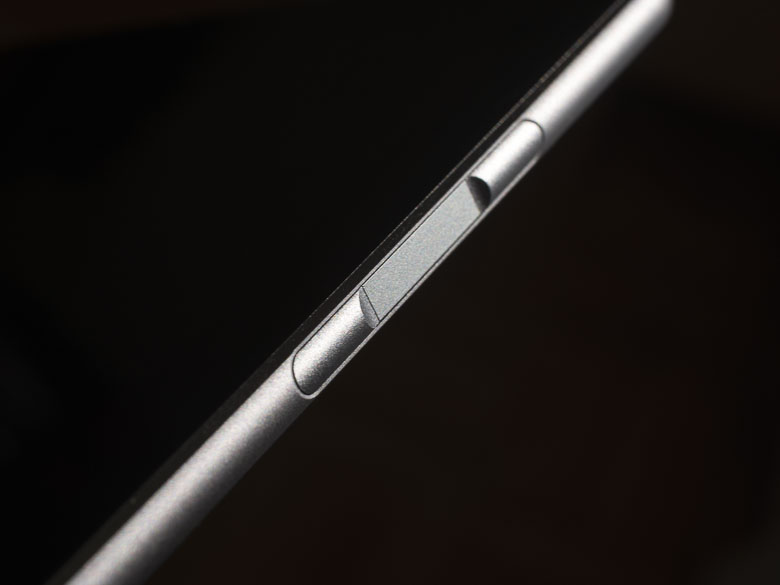 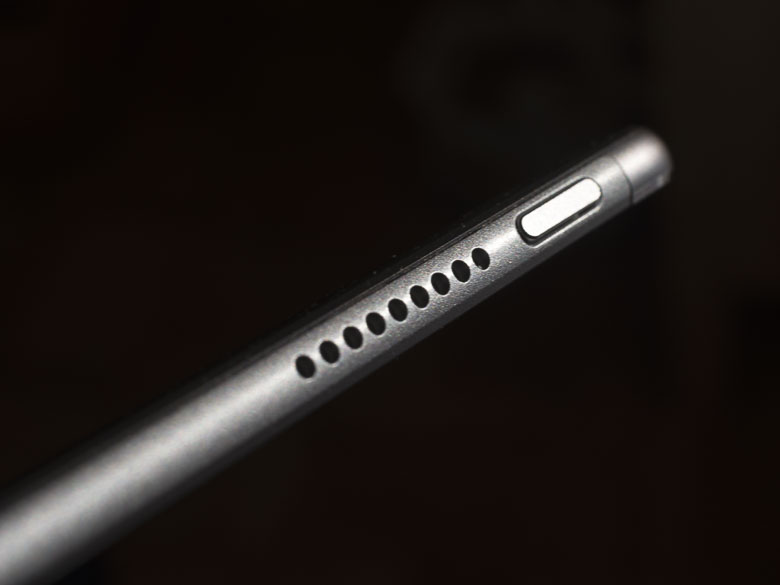 The power button is on the top edge just like the 2016 Matebook.  You’ll also see the speaker grills here.  The audio is okay, but it’s nowhere near the special Dolby Atmos quality speakers that are built into the Huawei MateBook X laptop. 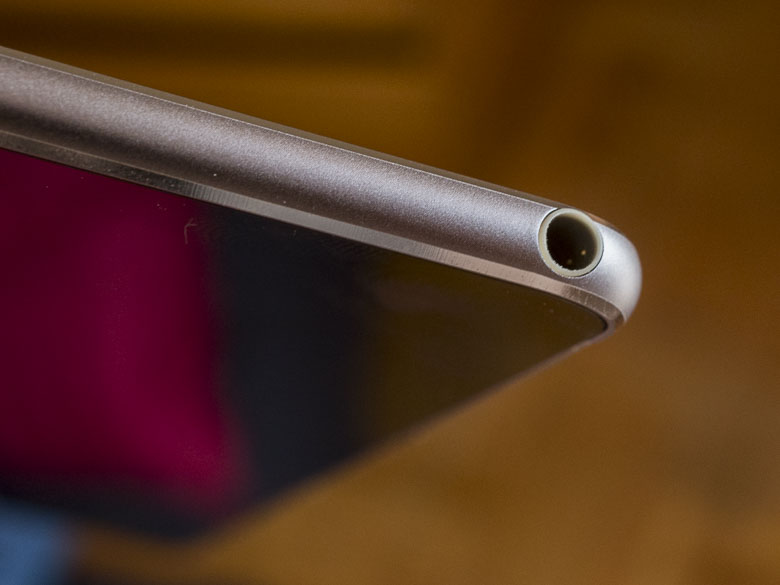 Yes there’s a 3.5 mm headset jack for plugging headphones into the tablet PC.  Here you can see how nicely the metal edges were machined around the glass touch screen.

Without the keyboard cover, 6.9mm is very thin, but as you can see in the above photo, the new MateBook Folio Keyboard takes the thickness down a bit more.  Both the MateBook E and 2016 MateBooks are almost exactly the same size as tablets. 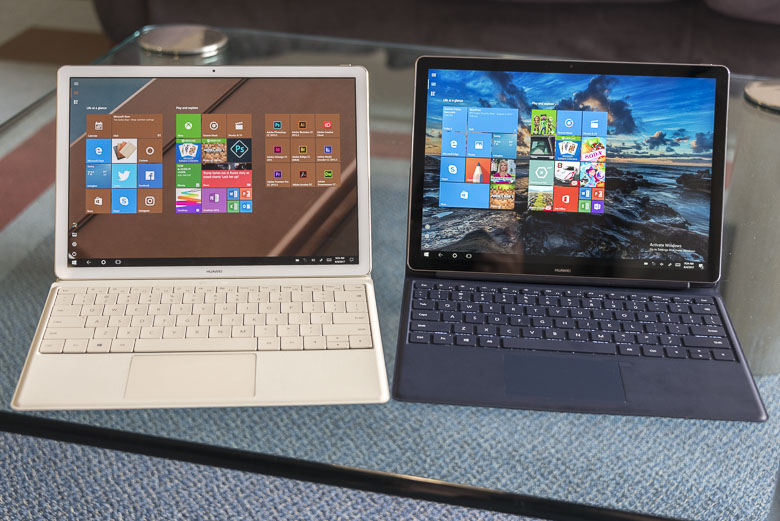 In terms of the display, the MateBook E seems to be no different from the 2016 MateBook either. The main difference in the tablet PC hardware itself, not including the keyboard cover, is that the new 2017 MateBook E has the 7th generation Intel processor options while 2016’s version had 6th generation Intel processors. That actually gives the new MateBook a significant improvement in battery life which is one of the things last year’s model could be criticized for. 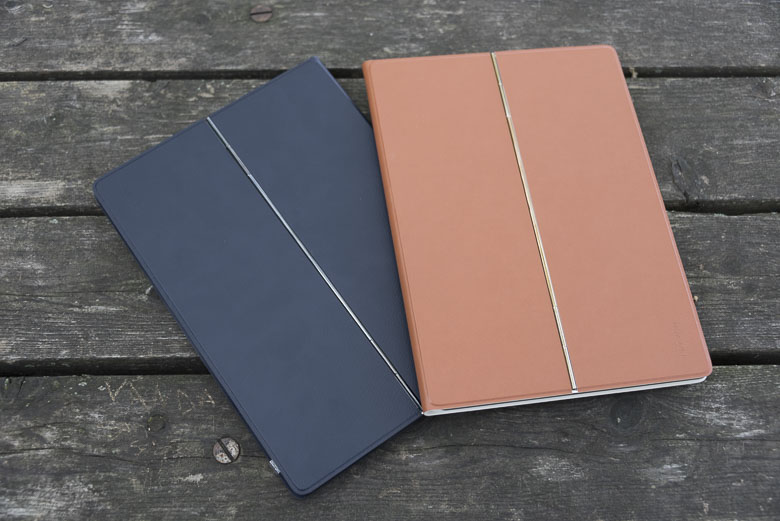 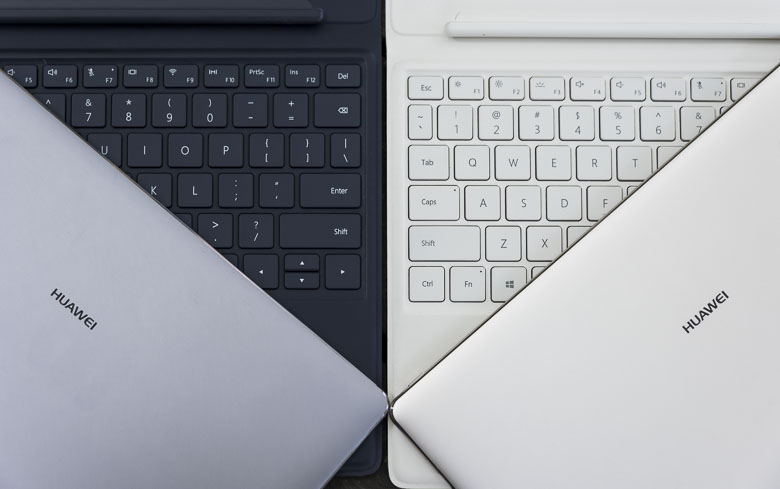 The 2016 Huawei MateBook was practically fully stock Windows 10 except for a little Huawei app that listed links to download all the drivers along with some support and documentation stuff. It was beautiful! In 2017 we have some issues. UPDATE: Huawei sent us another MateBook E which does not have the Windows 10 activation problems that our orignal version did. Incidentally, the MateBook E ships with Windows 10 version 1607, not the newer 1703 Creators Update. Of course, you can easily upgrade and eventually Windows Update will prompt you to update anyway.

First of all is the fact that our MateBook E arrived with a version of Windows 10 that could not be activated. Yeah, that’s grounds for returning a PC and requesting a full refund. I’m not sure if they installed the wrong version of Windows 10, since it said it was Windows 10 Home edition in the operating system, but the sticker on the back said Windows 10 Pro. Regardless, Huawei’s PR firm who sent the unit wasn’t able to help in our two weeks with the device, so we’re just going to review it as if it shipped with an invalid license. 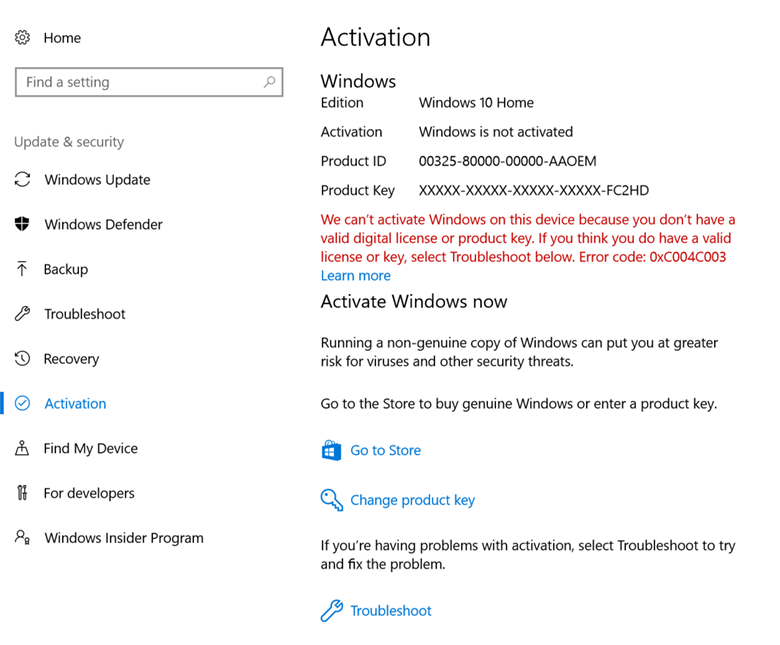 The OS was able to install updates well enough, but without a proper activation key built into the UEFI and without any documentation or stickers that include a proper activation key, Windows 10 lacks some functionality. First off there’s a watermark in the lower right corner at all times reminding you that Windows is not activated. That can make notifications difficult to read.  You also won’t be able to use most of the Microsoft Account services such as syncing settings between devices.  And finally, the personalization options are disabled, so you won’t be able to change any background images or colors. 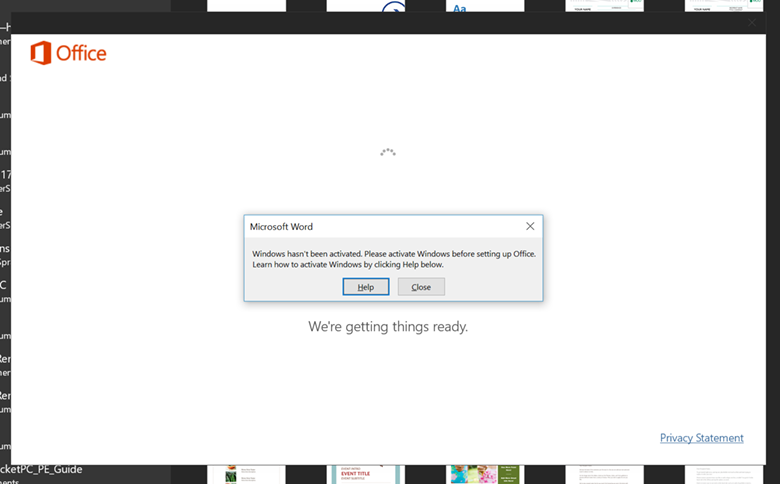 Another really annoying aspect of having an invalid version of Windows is that you can’t activate Microsoft Office 2016 either. Well, you sort of can, but the above dialog box comes up every time you use it. 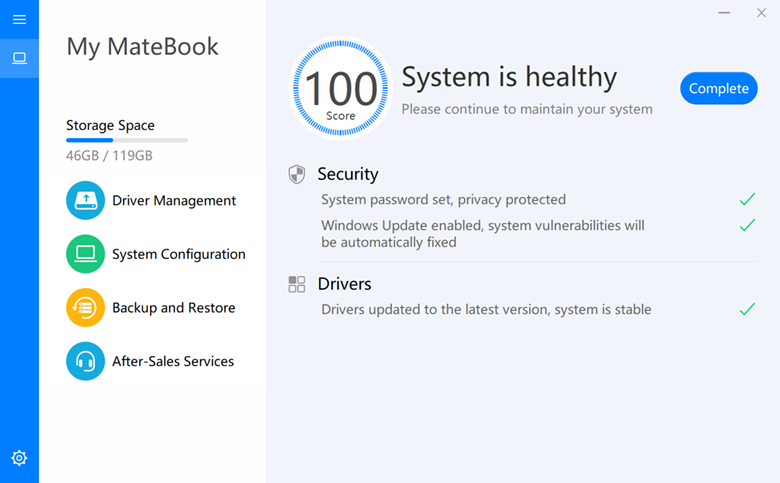 Like the Huawei MateBook X, the MateBook E also includes the “My MateBook” Manager software.  This mainly lets you monitor driver updates from Huawei. 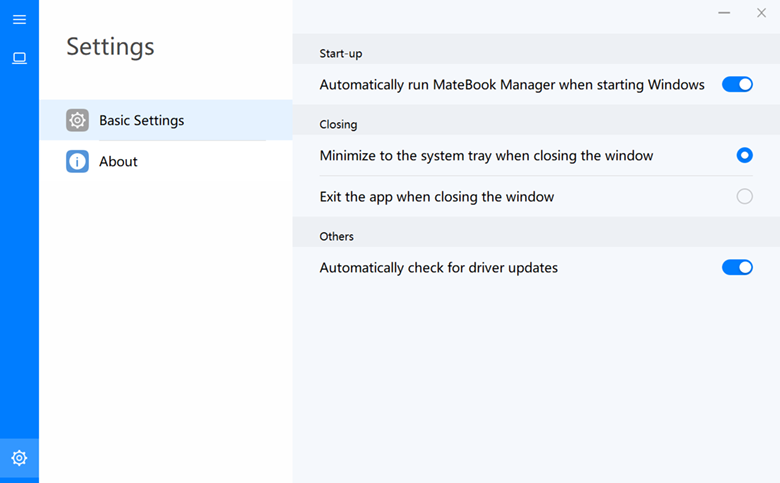 It’s pretty slim on settings, but there is a backup utility where you can backup your device to an external drive. There’s also an option for configuring what the Function keys do as their default behavior. By default the “Hot key” option is selected which means you don’t need to use the “Fn” modifier to change screen brightness, volume, etc. Setting this to “Function key” will enable the F1-F12 functions as the default behavior for those keyboard keys.

As always battery life is a relative term depending on what kind of CPU intensive programming you’re going to do, but battery life is one area where the MateBook E tablet itself is a big improvement over the 2016 MateBook. In general I can last a full work day on its 33.7 Wh battery without having to use the charger. With light Microsoft Office, email, web browser use, you should easily be able to get 8-10 hours of battery life out of it. Be careful when using other USB-C chargers though as those may not be compatible. For example, last year’s 2016 MateBook USB-C charger won’t work with the 2017 MateBook E and there’s no obvious way to know that. 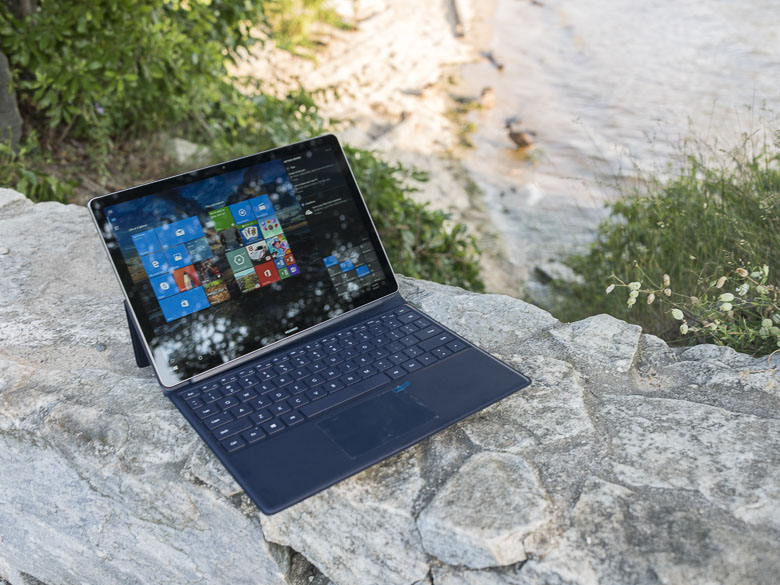 The MateBook E is currently available from Amazon and Newegg in 2 configurations. 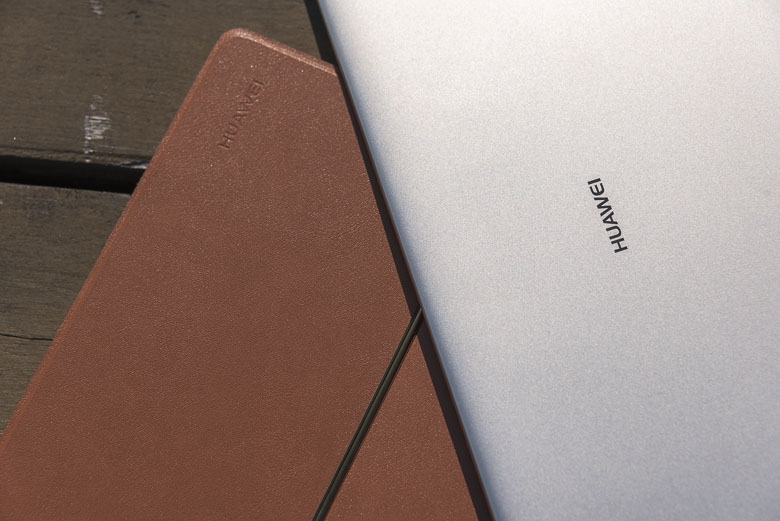 We were really impressed with the excellent original MateBook 2-in-1 tablet PC that Huawei released last year as their first foray into the Windows 10 PC market. The MateBook E is the 2017 successor that greatly improves the battery life, adds a fully adjustable keyboard cover kickstand, and improves the keyboard keys a bit. It’s unfortunate that it does not include a USB-A to USB-C adapter, and it’s unfortunate that the device has to use USB-C at all given so many compatibility problems. I miss having a magnetic attachment for the MatePen pen loop as well. Overall, it’s still as beautifully designed as the original MateBook, but we’re a little concerned that our first review unit shipped with a version of Windows 10 that could not be activated without buying a second license. Our second model worked great though, so hopefully the first one was just a pre-release prototype.

If rumors are to be believed, Apple is working on the next-gen AirPods Pro and could introduce it at its Spring Loaded iPad Pro event.

Apple touts that the new iPad Pro can deliver up to 10 hours of surfing the web on Wi‑Fi or watching video on a single charge.