Huawei MateBook 14 review: the “just right” laptop in the line-up

For a few years now, Huawei has been releasing some excellent Windows 10 laptops and tablets. They started off with 2-in-1 tablets. We loved the original Matebook back in 2016. In 2017, Huawei released their first laptops, and their MateBook X featured an awesome power button with built-in on-boot fingerprint scanner. The 2019 version of the MateBook X has gotten even better with the “Pro” moniker, but today we’re looking at another model of the Huawei MateBook series of laptops… the MateBook 14. This MateBook is a step down from the higher-end MateBook X Pro and a step up from the smaller and less expensive MateBook 13, but it still has a lot of the excellent features shared between the two.  Read on to see how the MateBook 14 fares as a svelt Windows 10 laptop. 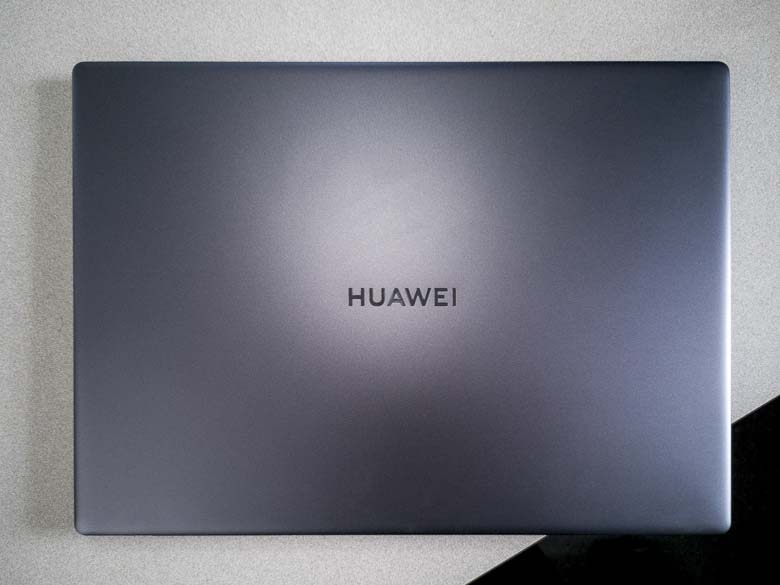 The Huawei MateBook 14 looks very much the same as other recent MateBook laptops. It’s got that nice silver metallic look, with an embossed Huawei logo (although some are using the peacock style logo now.) 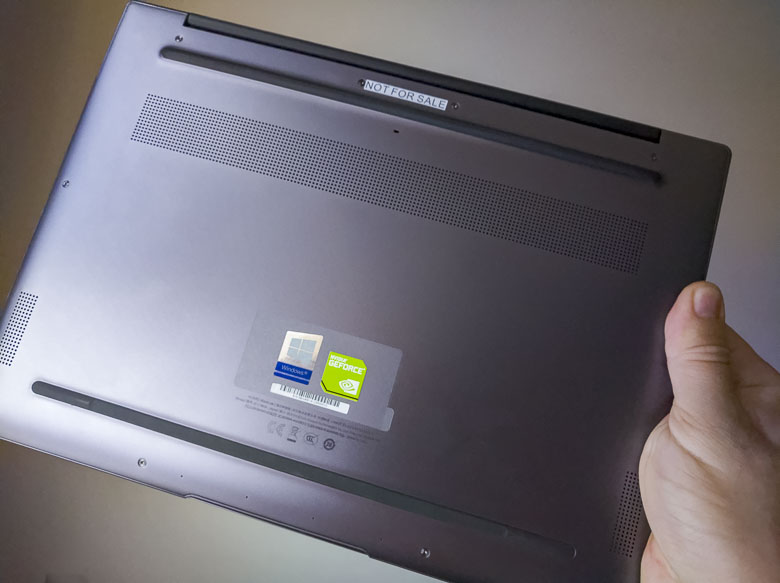 On the back we’ve got a couple strips of rubber to keep the laptop from sliding around on a desk or table. You’ve also got some big speaker grills and ventilation holes, along with the Windows and GeoForce stickers. 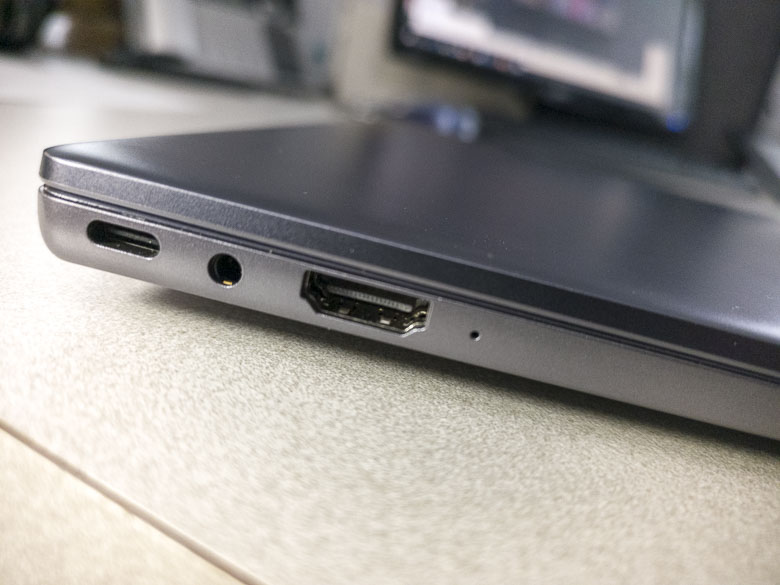 One of the good things about the new Huawei MateBook 14 compared to older versions is how many ports it has built in.  Here on the left side you see the single USB-C charging & data port, a 3.5mm stereo headphon jack, and even a full sized HDMI port. 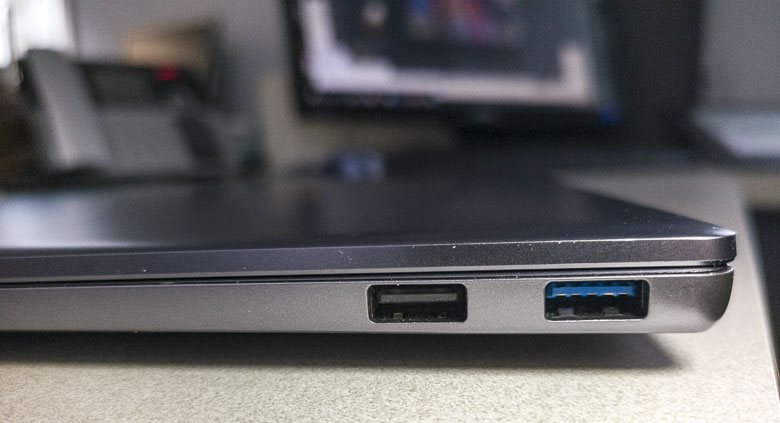 On the right side, we’ve got two full-sized USB-A ports. The one with blue inside is a faster USB 3.0 port, so you should use that for higher-throughput devices like external drives. 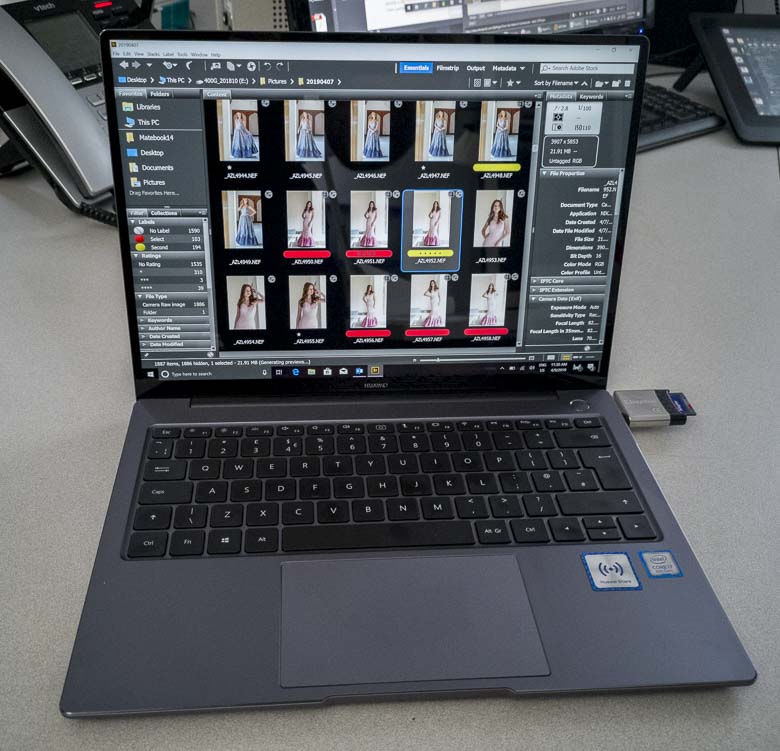 It’s really nice to be able to plug in just about anything without having to carry any adapter around. The NVIDIA GPU makes editing photos much faster than other laptops with lesser graphics processing units. 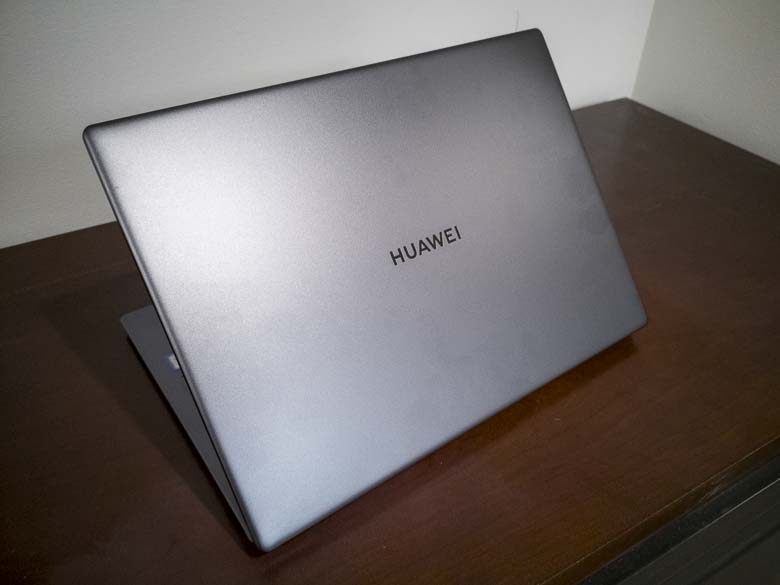 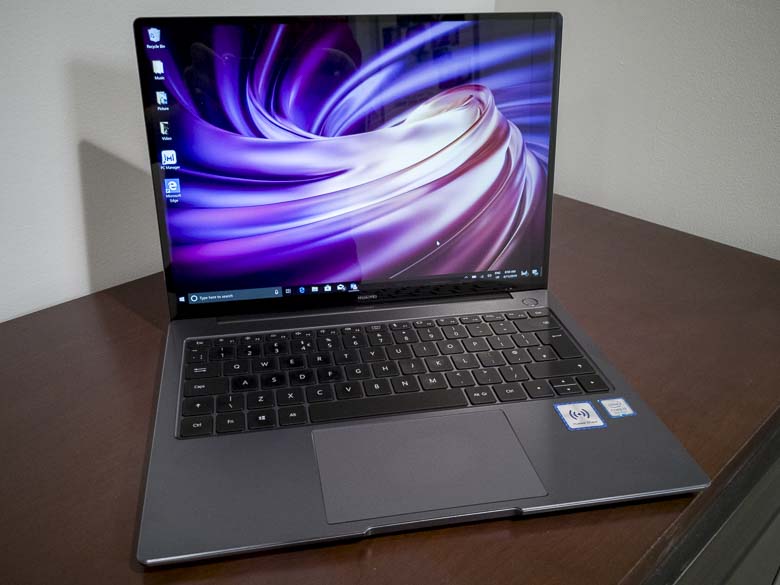 The screen has nice color and brightness, but it is extremely reflective (just like Macbooks for example.)  This means you have to increase the brightness in order to compensate for glare which reduces the battery life. Often the glare is just too much to see certain parts of the screen and you’ll have to change your seat to somewhere with less reflections in order to use it. On the other hand, that thin bezel surrounding the screen, makes it look a lot larger than you would expect for a laptop of this size. 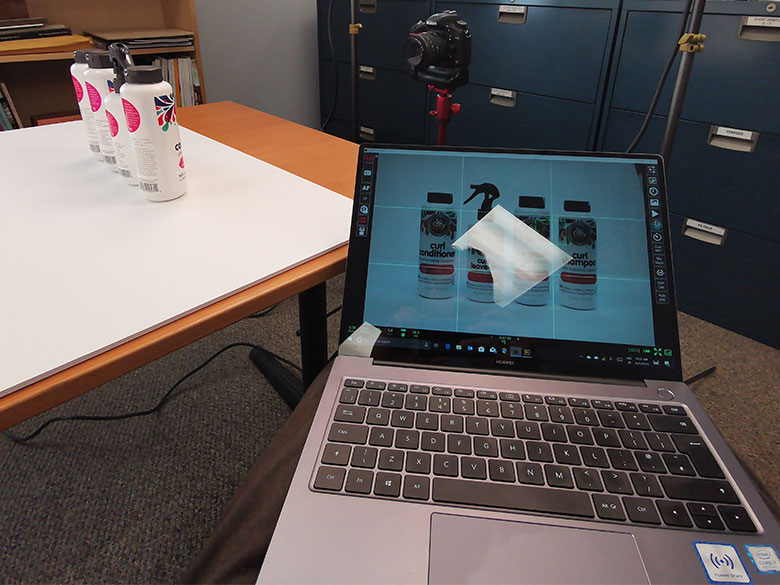 I used the Huawei MateBook 14 to do some remote camera control and wireless tethering for a tabletop photo shoot, but that glare on the screen is just way too much. 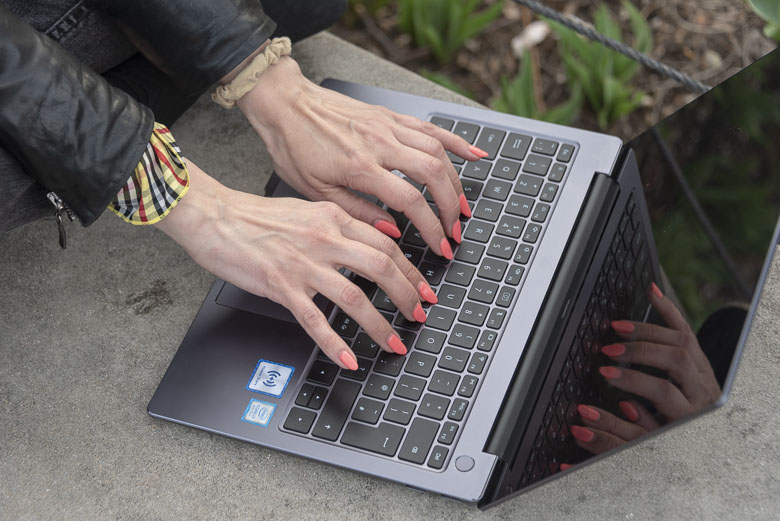 The keyboard is unfortunately a bit uncomfortable. The keys don’t have much movement and the layout of our review unit was U.K. style instead of U.S. style, so that took some getting used to. The keyboard feels a lot like the new Macbook Pro keyboard which everyone hates, however it has not started having typo problems, repeat key presses, or letter skipping. 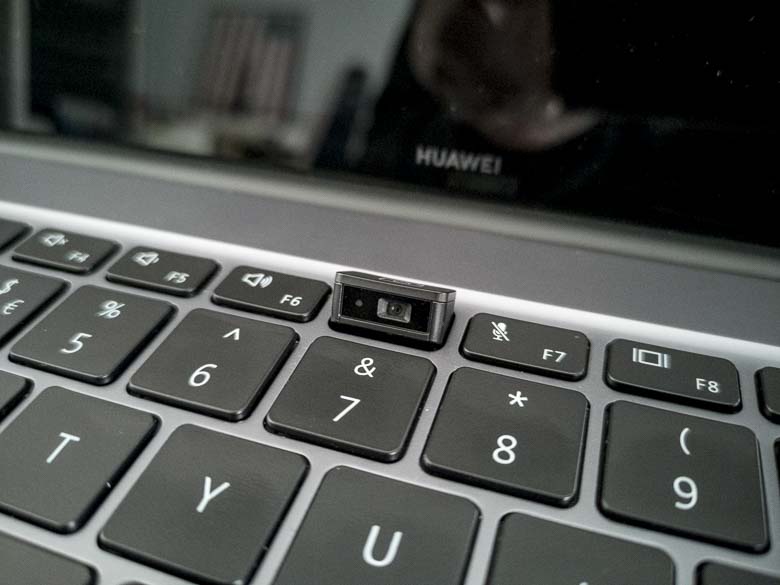 If you didn’t know that the Huawei MateBook 14 had a hidden camera inside the keyboard, you would probably think that it didn’t have a camera at all. There’s one key between the F6 and F7 keys on the top row that pops-up the front facing camera when you press it.  This has the advantage of being physically disabled.  No need for a “privacy” shade or piece of tape over the camera when you want to be sure you’re not getting spied on, just collapse it into the keyboard. 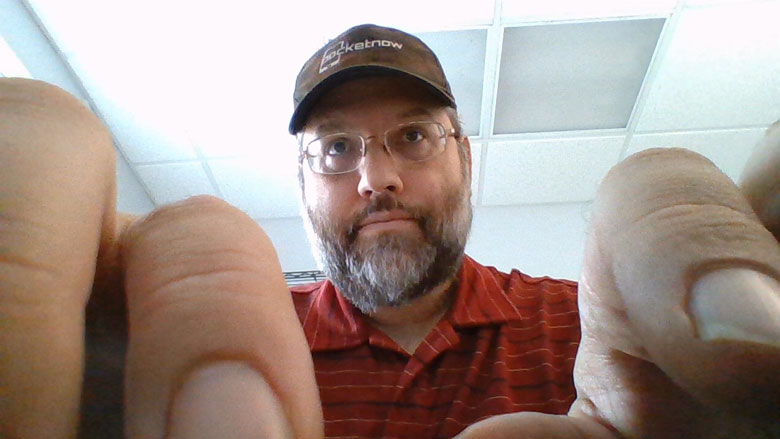 The disadvantage to this camera position is that your fingers get in the way if you have to type while on a video call. 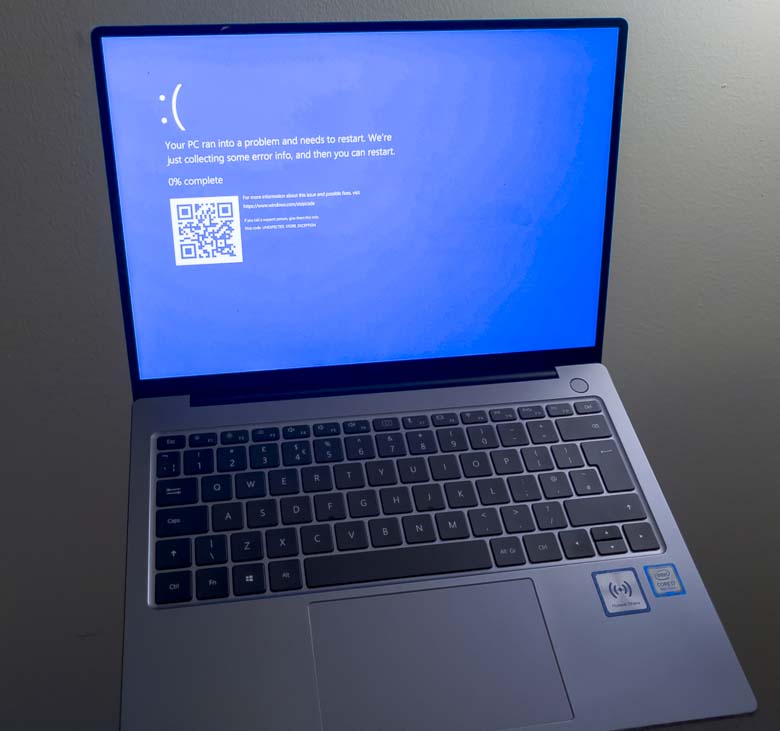 Full disclosure… This is our 3rd Huawei MateBook 14 review unit. The first one was crashing a bit too much, and the 2nd one had a complete SSD drive failure that made it unbootable and lost all of the web development work I had done on it. Huawei said this was a prototype, but… you probably shouldn’t be sending broken devices out for review. Hopefully, the production models actually being sold to customers won’t have any SSD problems!

Back in 2016 the original Huawei MateBook had no bloatware at all. It was practically fully stock Windows 10 except for a little Huawei app that listed links to download all the drivers along with some support and documentation stuff. It was beautiful! In 2019, the new Huawei Matebooks have lost that simplicity and now include an always-running “PC Manager” system tray application. It’s gotten a bit more intrusive than previous “MateBook manager” programs as well. 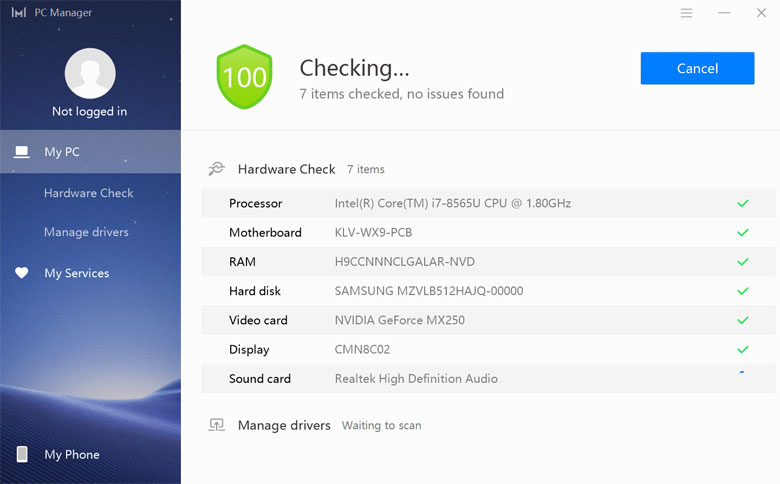 The PC Manager can be launched as a utility for getting more information about your Huawei MateBook 14, managing driver updates, and accessing Huawei services. 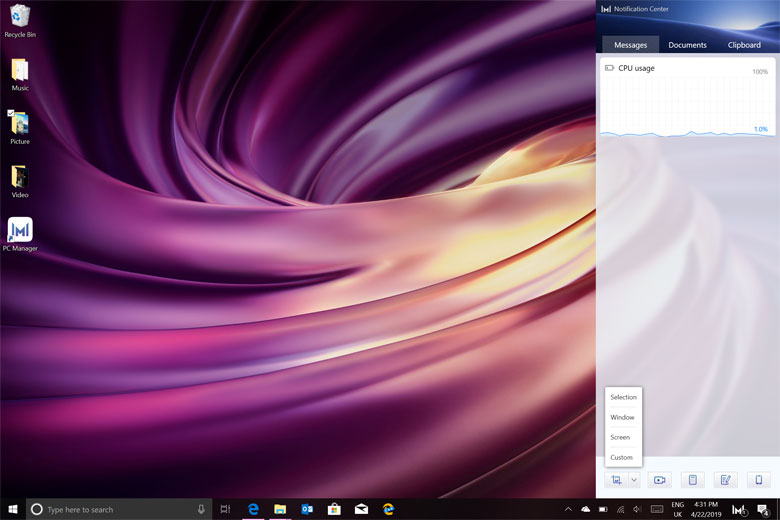 It’s also an always-on system resident service that will keep track of recently used documents, CPU usage, and everything you copy to the clipboard. There are also some nice screenshot tools here. 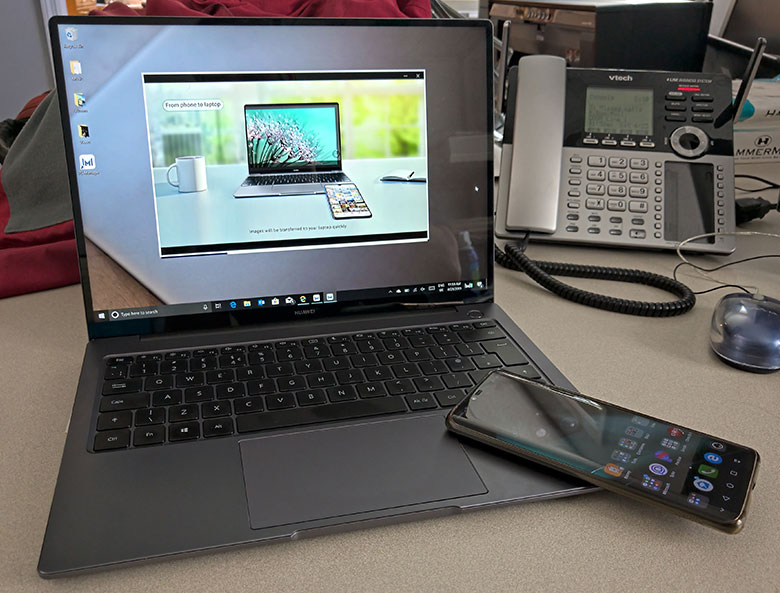 One of the included special features of the Huawei MateBook 14 software is the ability to pair the laptop with a Huawei Android phone. After connecting, you can wirelessly access and transfer files between the devices as well as use the phone’s data plan as internet access for the laptop. 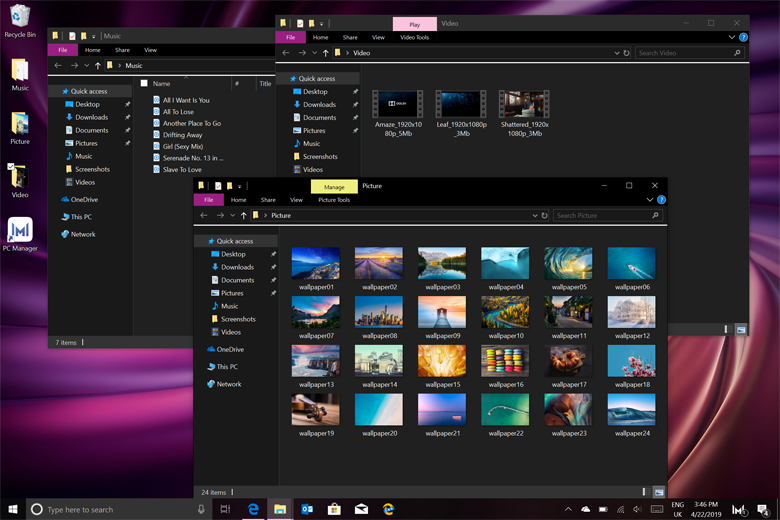 For some reason, 3 folders of sample content are included on the desktop.

As always battery life is a relative term depending on what kind of CPU intensive programming you’re going to do. In general, with the Huawei MateBook 14, I can last a full work day without having to use the charger. Doing any kind of heavy graphics work such as video editing in Adobe Premiere Pro or even running a portable web server, will greatly reduce battery life and also cause the bottom to get a bit hot. With light Microsoft Office, email, web browser use, you should easily be able to get 8-10 hours of battery life out of it. Recharging with the included charger takes only about 3 hours to get back to full capacity. Be careful when using other USB-C chargers though as those may not be compatible. 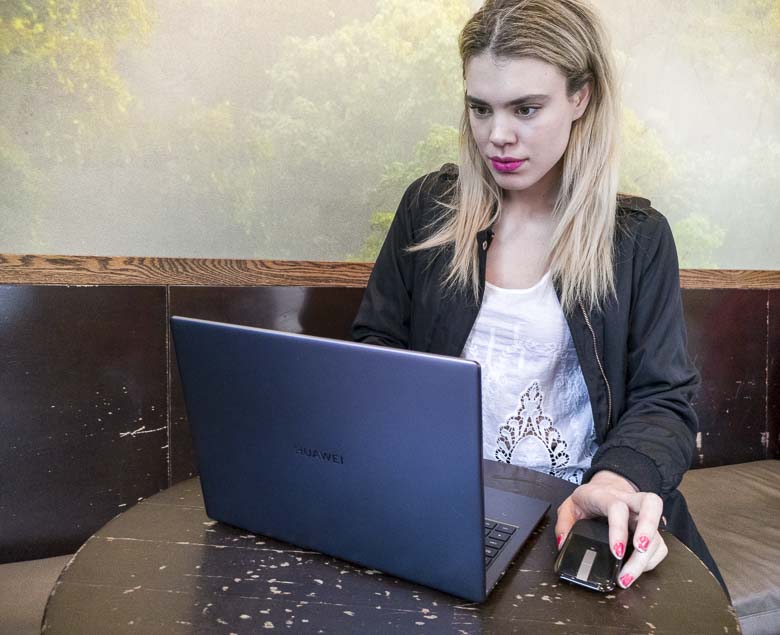 The Huawei MateBook 14 is a nice step between the more expensive MateBook X Pro and the smaller less expensive MateBook 13. It maintains most of the powerful features of the MateBook X Pro, while saving some money in areas that probably aren’t that important for many users. It’s kind of a “Goldilocks” model that fills out the “just right” middle area of Huawei’s laptop line up.  If you’re in a country where this is sold, I recommend getting an extended warranty though considering two of our prototype review units had some issues.

We start today’s deals with a nice selection of laptops from Amazon.com, where we find the Samsung Galaxy Book Pro, monitors, and more on sale

Microsoft has released the first beta of Windows 11 Preview, available to all users who are enrolled in the Windows Insider Program.

We keep on getting amazing deals from Amazon.com, where we find several Windows laptops on sale, including the Dell XPS 13 9310 and more

For now, HarmonyOS is just a little bit too disrupted to make this smartwatch an easy…