The Huawei Mate 8 is practically guaranteed to go official on November 26 in China with an unusual round-shaped fingerprint scanner on its back.
Published 02 November 2015, 11:23 EST

We already know (as in know, not presume) Huawei isn’t yet done with flagship Android phone launches for 2015, despite more than satisfying sales numbers posted by the likes of the Ascend Mate 7, P7, and P8.

The non-Ascend Mate S will go up against the iPhone 6s, an even larger Mate 8 is in the works as a direct 6s Plus challenger, while the Nexus 6P probably has an altogether different target audience. After all, Android purists rarely consider Apple’s iGear an option, and vice versa.

But enough about the Google-endorsed phablet. Let’s dig deeper into what the Huawei Mate 8 has in store, and the when of the equation. Since the mystery premium 6-incher should be headed first (only?) to China, you won’t be surprised to hear its commercial release may happen in December.

That’s late by Western standards, missing out on an important chunk of the holiday season, but with the Chinese New Year celebrated on February 8, 2016, it’s right on time to sell like hotcakes when it matters around those parts. 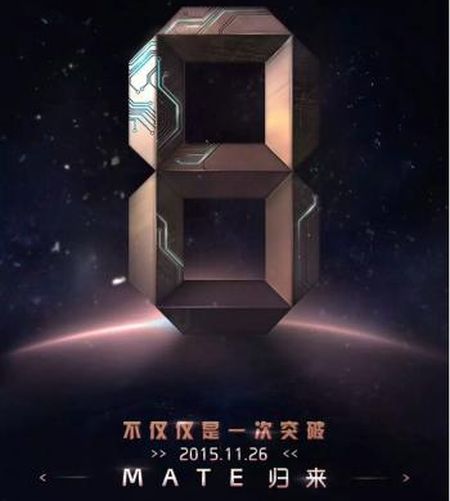 Of course, a January debut in stores isn’t entirely out of the question, as all we know is the Mate 8 will break cover on November 26. Most likely with Quad HD screen resolution in tow, a homebrewed 16nm-based Kirin 950 processor inside, at least 3GB RAM, full-metal jacket and, surprise, surprise, a circular rear-fitted fingerprint sensor.

The positioning isn’t the surprise, but the form factor is, and a blurry leaked pic claiming to show the device in disguise also displays a matching round camera lens, with a dual LED flash endowment. Quite the significant design overhaul, now let’s wait and see if the front panel looks “original” too.