Although several top-tier smartphone vendors are either yet to formally unveil or commercially release their H1 2018 flagship models, the rumor mill is already abuzz with talk of exciting fall upgrades. But while Samsung’s Galaxy Note 9 is widely expected to use the same 10nm-based Exynos 9810 and Snapdragon 845 processors as the GS9 and S9+, Huawei should be able to greatly improve on its in-house Kirin 970 SoC powering both the Mate 10 and P20 families for the… Mate 20?

Technically, the Chinese company’s next hero device may well end up being called the Mate 11, but if what we’re hearing about the raw speed of the Kirin 980 chipset is correct, a Huawei Mate 20 name makes far more sense. This is in no way confirmed, but a handset suspected to be Huawei’s next big thing allegedly scored a record-smashing 356,918 AnTuTu points. 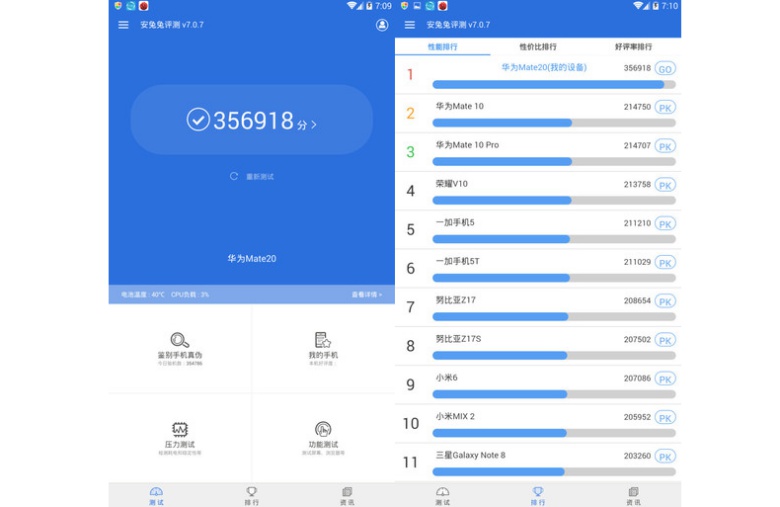 Some of you probably remember how Xiaomi tried to build buzz around the Mi MIX 2S by revealing the SD845-powered 6-incher crossed the 270,000 AnTuTu barrier in pre-launch testing. Well, this presumed Mate 20 prototype can deliver roughly 30 percent more processing speed, at least in theory, and if real, the phone is still six months or so away from its market debut.

That’s pretty impressive, and it’s most likely all due to Huawei’s jump to a 7-nanometer technology node. Compared to the 10nm-manufactured Kirin 970, the 980 should be substantially more powerful and energy-efficient, putting the Snapdragon 845 and Exynos 9810 to shame, and setting a very high standard for the two’s sequels, expected out next spring. Then again, it’s important to remember this is all conjecture and idle speculation for the time being.

Samsung Galaxy A82 will rely on the Snapdragon 860 SoC and might arrive with a unique sliding display mechanism.

The slump recorced by HUAWEI phone biz was offset by growth in other categories that helped the consumer business group to remain profitable.