We’re just four days away from the Munich, Germany announcement of possibly the most exciting high-end Android smartphone duo left to be unveiled this year, and in case you needed a reminder, here’s that divisive Huawei Mate 10 Pro design again, rendered in the best quality and largest size yet.

Still can’t decide if the screen bezels are thin enough, the fingerprint reader positioned correctly, and whether the two-tone back is an elegant or tasteless aesthetic choice? You’ll probably have to make up your mind soon, although it remains unclear if both the Mate 10 and Mate 10 Pro are due out worldwide. Will they target different markets or just slightly different price points?

What’s perhaps most interesting about the latest ev-leaked Mate 10 Pro image is that we seem to be looking at a different shade of grey here than the one initially revealed alongside blue and brown color options. It’s a darker all-around hue, and the dual camera section is painted full-on black, producing an arguably nicer contrast. 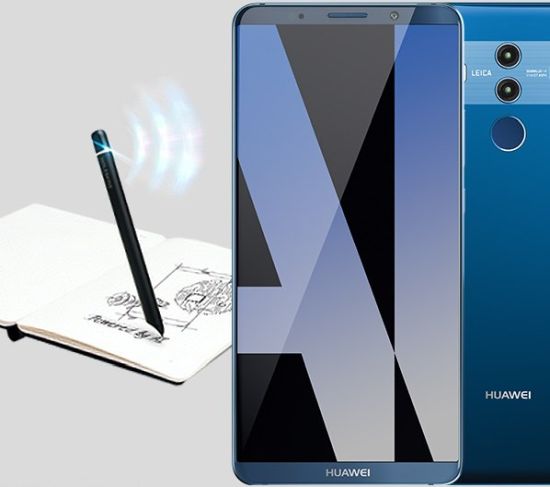 Meanwhile, the snazzy blue flavor is rendered today by the same infallible leaker next to a stylus that looks an awful lot like the Moleskine Pen+. This could mean Huawei will go after Samsung’s Galaxy Note 8 with all guns blazing, even aiming to challenge the S Pen-wielding beast’s creativity and productivity.

It’s a bit of a stretch to expect such a nice third-party accessory to be bundled with the Mate 10 Pro a no extra cost, but we can probably count on some sort of a combo discount. Then again, the Moleskine Pen+ is currently only sold as part of a $199 “Smart Writing Set”, together with a Moleskine Paper Tablet.

We keep on getting some great savings, and today we have also found the Google Pixel 5, the OnePlus 8 Pro, and more devices on sale