As expected, Huawei’s China-“only” Honor V9 has just expanded to the old continent as the Honor 8 Pro, setting you back €549 with ultra-high-end specs.

We’ll admit, we remain confused as to the identity of Huawei’s true H1 2017 flagship phone. The P10 and especially P10 Plus definitely have what it takes to provide some stiff competition for Samsung’s Galaxy S8 duo and the LG G6, but so does the Honor V9, aka Honor 8 Pro.

Yes, the rumors were spot-on, and the previously China-exclusive 5.7-inch Honor V9 has just gone official and on pre-order in Europe as the Honor 8 Pro.

Not only significantly larger than the original Honor 8, this bad boy also includes a sharper Quad HD screen, faster Kirin 960 processor, whopping 6GB RAM… as standard, heftier 4000mAh battery, and of course, Android Nougat out the box, with a “seamless and uncluttered” EMUI 5.1 on top.

Exuding “minimalist sophistication”, the Honor 8 Pro stands out from the P10 and P10 Plus with a circular rear-mounted fingerprint scanner and far more prominent top and bottom antenna lines on the otherwise sleek metal back. 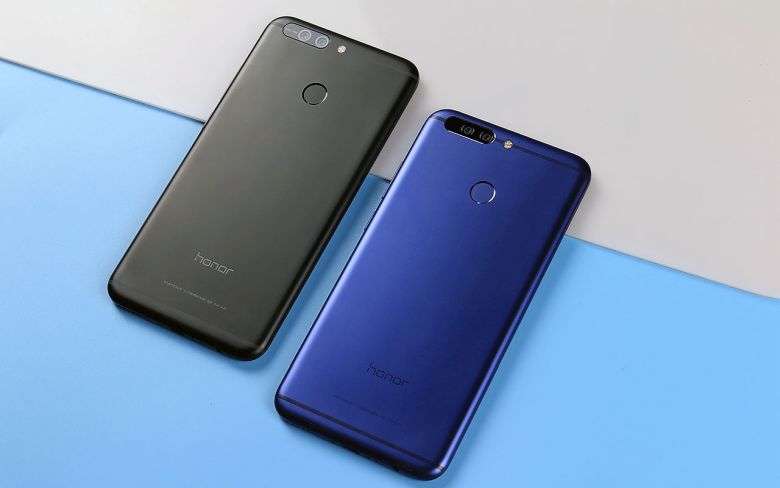 “Impossibly thin”, at 6.97mm, the platinum gold, midnight black or navy blue giant obviously sports a flush dual main camera setup as well with 12MP monochrome and RGB lenses joining forces to always deliver the perfect shot. Maybe not as “perfect” as the P10 though, which bumps one of the sensors up to 20 megapixels.

Still, the Honor 8 Pro arguably offers a whole lot of bang for your buck Euro, even including virtual reality capabilities enabled by a bundled-in cardboard viewer. At €549, you get all the above, plus a special gift set, if you pre-order the phone today in France, Germany, Italy, Spain, Switzerland or the UK from vmall.eu.