Huawei Ascend Mate2 4G goes official, will be coming to US carriers

Huawei makes it clear that it’s not done with the US just yet, announcing the Huawei Ascend Mate2 4G in Las Vegas today.
Published 06 January 2014, 15:24 EST

Remember back a little over a month ago when some comments attributed to Huawei’s CEO sure made it sound like the company might be planning to focus its efforts away form the US market? Every since we’ve been trying to figure out just how much truth there might be to that idea, and while we’ve been holding on to the assumption that Huawei wouldn’t do anything quite so drastic, we’ve been waiting for news of another major US launch – some real evidence to counter the theory. Today at the CES in Las Vegas we got just that, as Huawei announced its new Ascend Mate2 4G, along with plans to bring the phone to the US.

Huawei is clearly enamored with the phablet form factor, as the Ascend Mate2 4G will be a big one: its LCD panel measures-in at 6.1 inches. That’s the same size as last year’s original Ascend Mate, and while we’d like to see it step up to 1080p, for now Huawei’s content with 720p. One improvement we are aware of is a significant slimming-down of the phone’s bezel.

Notably, Huawei is turning to another chipmaker for the SoC this time around, going with a Qualcomm-made quad-core Snapdragon 400. At least, that’s for those US editions – the Chinese version will stick with a Hi-Silicon chip.

The phone’s front-facing camera will have a high-res 5MP and feature a wide-angle lens, and around back there’s a 13MP shooter. Like the first Ascend Mate, Huawei is giving this guy another jumbo-sized battery; while phablets like the Galaxy Note 3 top out at 3200mAh, the Ascend Mate2 4G packs a 4050mAh battery. You can even use that extra battery capacity to charge other devices when you’re on the go.

All in all, it’s an interesting middle ground: a lot of the specs aren’t killer, but there are few diamonds in the rough that hint at a “premium” feeling. More than anything, perhaps, we’re just glad to see that the US is still soundly in Huawei’s sights. 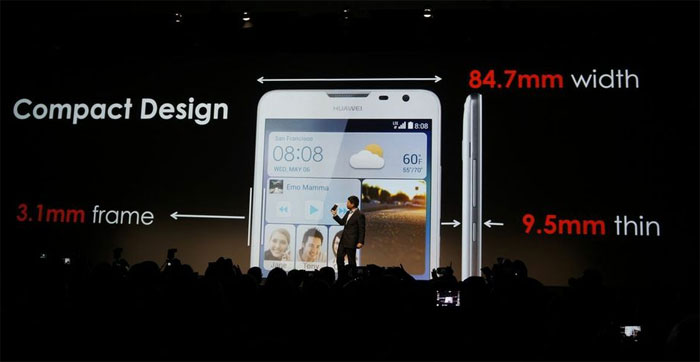 The RedmiBook and Mi Notebook have been long anticipated in India.