Could a Huawei 7P help the company make 140 million shipments this year?

The Chinese manufacturer that made the Google Nexus 6P last year has filed a trademark for a similar name for a potential non-Nexus successor.
Published 13 April 2016, 21:22 EDTUpdated 02 April 2021, 09:39 EDT

HTC is rumored to have the next few Nexus phones down for a lock. So, what’s going on with the news that Huawei has filed for trademark protections of the term, “Huawei 7P”? Like, what?

Sure, Huawei had a terrific time with the Nexus 6P — it stretched the company’s high-end footprint by providing a high-end, stock Android mobile experience to lands that are North America. But what would a Huawei 7P bring to the table? We don’t know. We’ll have to wait and see and hope that something comes out of this — it doesn’t always happen. Also, a Huawei 7P would sound not-at-all confusing alongside a Huawei P9 or something like that, just saying. 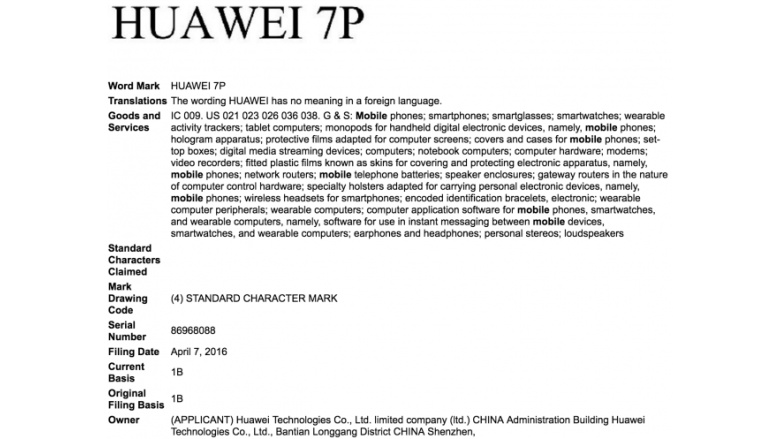 The company could be looking to keep a schedule of four flagship smartphones a year with the 7P (last year we saw the P8, the Nexus 6P, the Mate S and the Mate 8) to keep those shipments driven. The company wants 140 million smartphones out of its factories this year with about 61.6 million of them as flagships. Huawei’s eager to see consumer-side revenues at $30 billion this year and $40 billion in 2018. Part of the roadmap there will mean more mid-range and high-end phones in markets like the US and more retail and support presence in developing markets.

Get busy buildin’, get busy buyin’.

The Moto Edge 20 launch event is happening on August 5. Three new devices are expected to be announced, the Moto Edge 20, Edge 20 Lite, and Edge 20 Pro.

It seems that the new Wi-Fi 6E support in the upcoming iPhone 13 lineup would give us more bandwidth, faster speeds, and more benefits

Today, we get to see the OnePlus Nord 2 in all of its glory in some new renders, and the complete specifications of the device are leaked online.
YouTube 1.8M
Facebook 570K
Twitter 197K
Instagram 133K
RSS

The new ZTE Axon 30 comes with a number of hardware and performance upgrades, and a new…