HTC has made a couple of bold moves today with their launch of the Windows Phone 8X and 8S. Surely this isn’t an easy market for them with the Nokia Lumia 920 and 820 just around the corner, but I must admit that these new HTC smartphones do deserve your attention.

HTC made a lot of talk about how they pushed design in their press event today. Now even though design may not be much for many of you, in a platform like Windows Phone where differentiation is tough, design is everything. Nokia has done a great job in making the Lumia a gorgeous phone, but I must admit that both the One X and One S are just as beautiful. One of the characteristics that stunned us the most is just how thin these HTC devices are. When compared to devices like the Lumia 920, the 8X seems almost 50% thinner, even though their weight cuts it close. Where Nokia shines in design is in making a 4.5-inch display fit into a shorter design when compared to the 8X, even if the 8X isn’t as wide as the Lumia 920.

Now when it comes to specs, everything changes. HTC has brought some very competitive phones here, but the Nokia Lumia 920 is hard to beat when it comes to specs. Surely we love that HTC brought the same Super LCD 2 that we admire about the One X. We also like the fact that they pushed pixels-per-inch to a whole new level with the 8X at 341PPI. The problem is that Nokia went beyond with their capacitive display technology allowing you to operate the phone with gloves. The same goes for the camera where Nokia’s specs are far superior with their new PureView optical stabilization.

I’ll admit this is a hard call. I personally like HTC’s design a lot more than what Nokia brought to the Lumia 920, but Nokia just makes it hard to look away with the superior specs and added software experience of the Lumia. The following chart will help you grasp some of the differences of HTC’s Windows Phone 8X when compared to other flag ship smartphones, and it’ll hopefully help you make your pick. 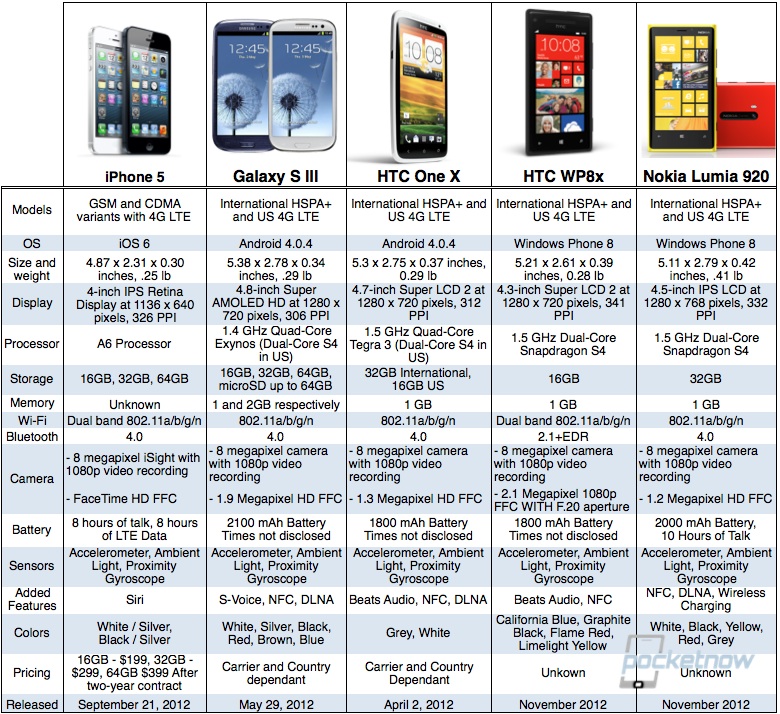