The Windows Phone 8X is one of the first phones available with the new Windows Phone 8 operating system. It’s got a Qualcomm Snapdragon MSM8260A dual-core 1.5 Ghz processor with 1GB RAM and 16 Gigs of internal storage.  The front-facing camera has a resolution of 2.1 megapixels, the rear camera 8 megapixels, and both support 1080p HD video recording. The 4.3-inch Super LCD2 screen features a 720 x 1280 pixel resolution.  Of course, you’ve got Bluetooth 2.1, WiFi, assisted GPS, and NFC.  The handset’s weight is 130 grams and the thickness is 10.12 millimeters at its thickest point.  Powering it all is a 1800 mAh battery.

The design of the Windows Phone 8X is quite impressive, in the same way as the Nokia Lumia 800, that is. It’s got a very smooth integrated shape and this version has a premium quality soft touch matte black finish. 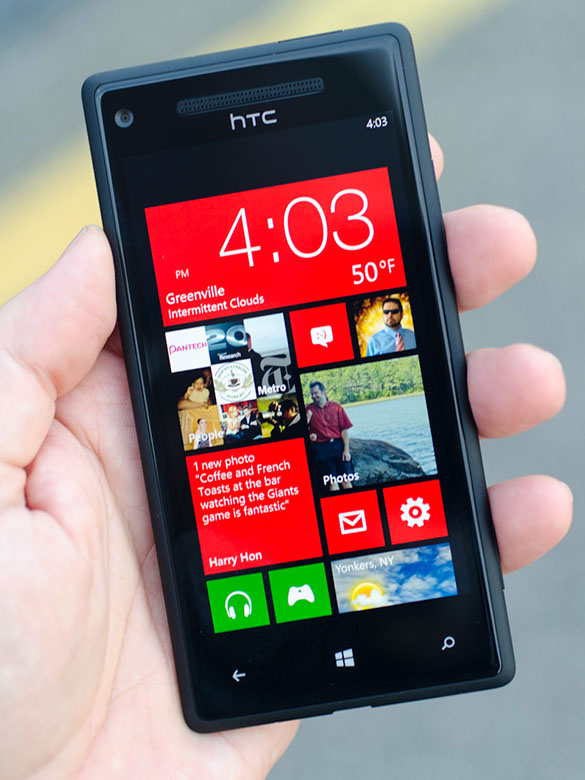 In the hand, the Windows Phone 8X feels very thin, and that’s because of its tapered shape. The center is thicker, but the edges slope down to a point. These pointy edges make it very uncomfortable to grip since there’s less surface area on the edges for your thumb and fingers. 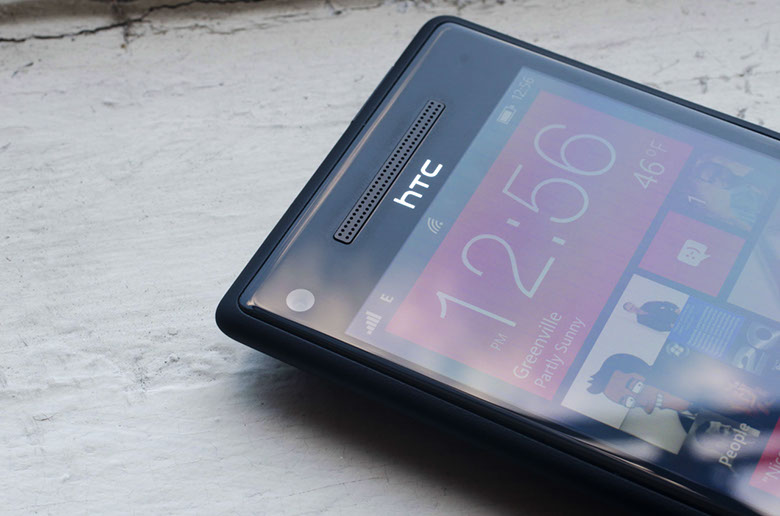 At the top you’ve got the handset speaker along with some sensors, a 2.1-megapixel front-facing camera, and an LED light that glows while charging. 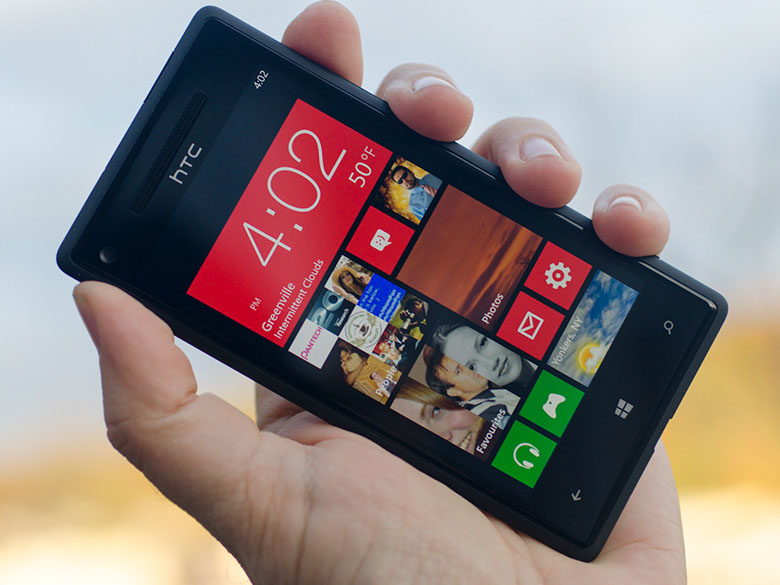 Then you’ve got a long 4.3-inch super LCD 2 screen with a very thin bezel. The resolution here looks great, especially close up, and it doesn’t get completely washed out in outdoor sunlight.  Oddly, if you squeeze the edges of the device, you’ll see some LCD color rippling, which indicates that the build quality isn’t as sturdy as it could be. 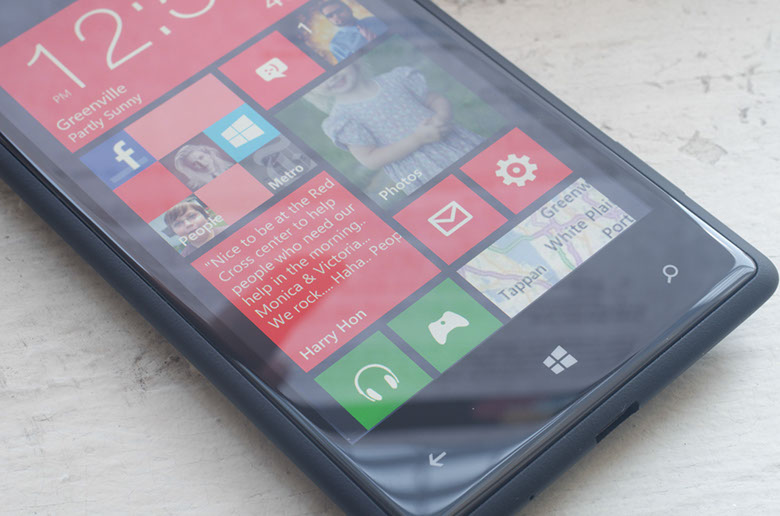 At the bottom are the usual Windows Phone capacitive buttons for search, start screen, and back.  You’ll notice the new Windows logo here. 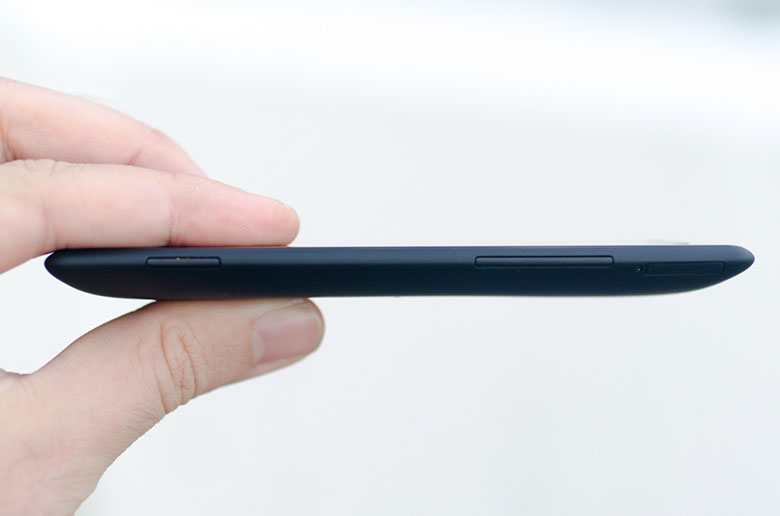 On the right side there’s a very flush volume control, as well as a camera button and the micro-SIM card slot. The buttons are very difficult to feel for without looking at the phone. 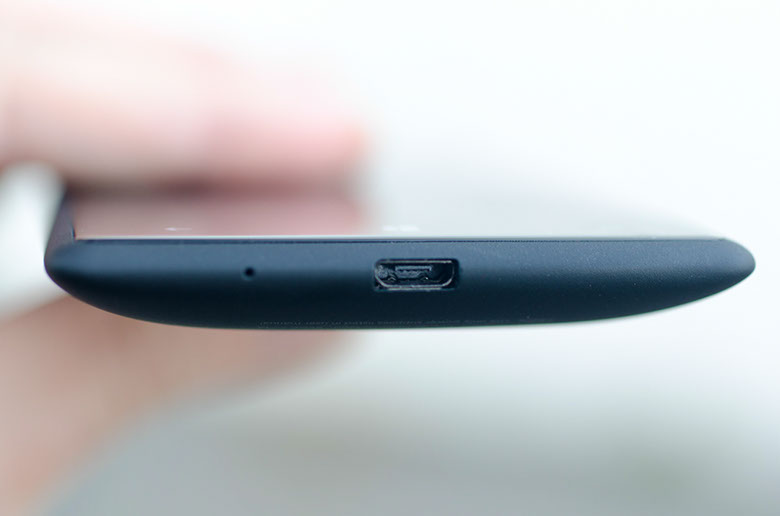 On the bottom you’ll see the microphone hole and a micro USB port. 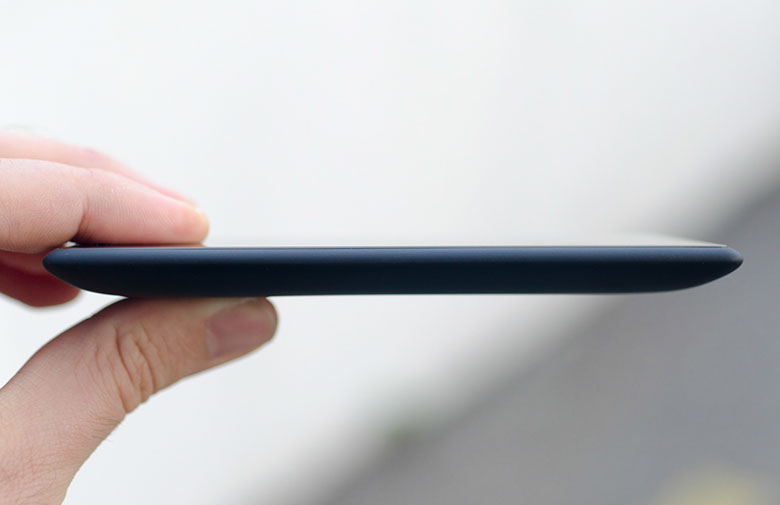 On the left side there’s just a thin, long edge. 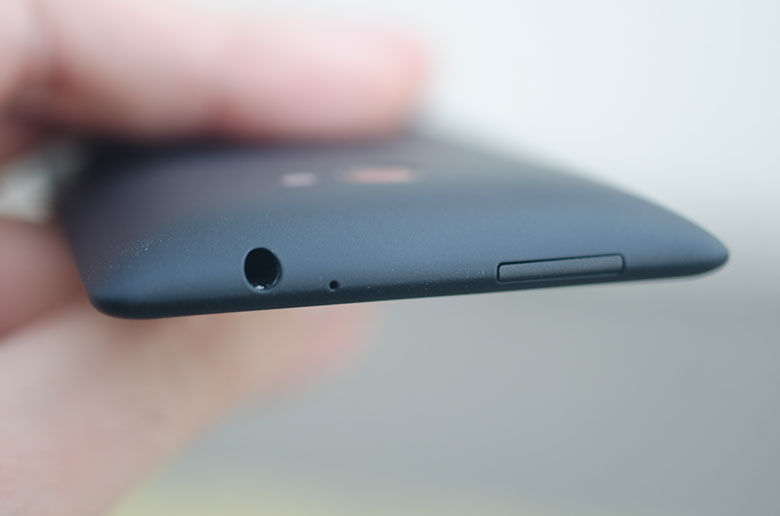 On the top is the 3.5-millimeter headset jack and the power button. Again, the power button is impossible to feel for, and having it at the top of the device makes it difficult to reach. 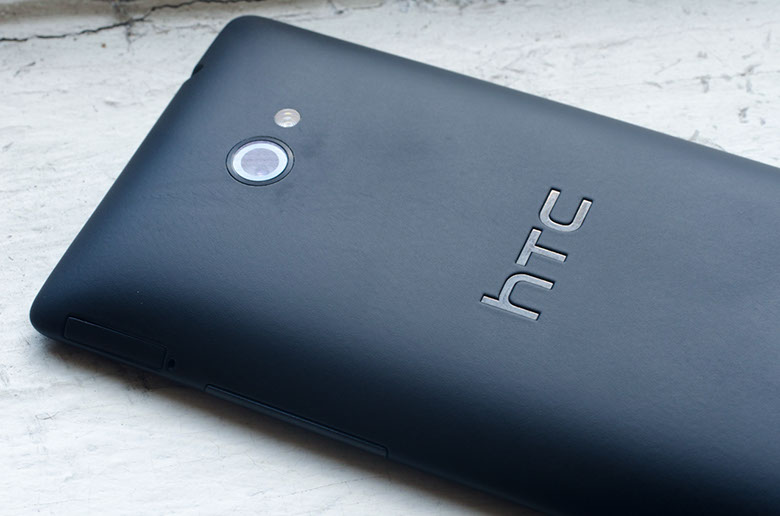 On the back is the 8-megapixel camera with a single LED flash and speaker.  You’ll also see the HTC and Beats Audio logos.

Most of our Windows Phone 8 coverage can already be found in our full Windows Phone 8 review. That’s where you’ll get the most meat about the software on the Windows Phone 8X, however there are a few customizations that HTC made which we’ll cover here. 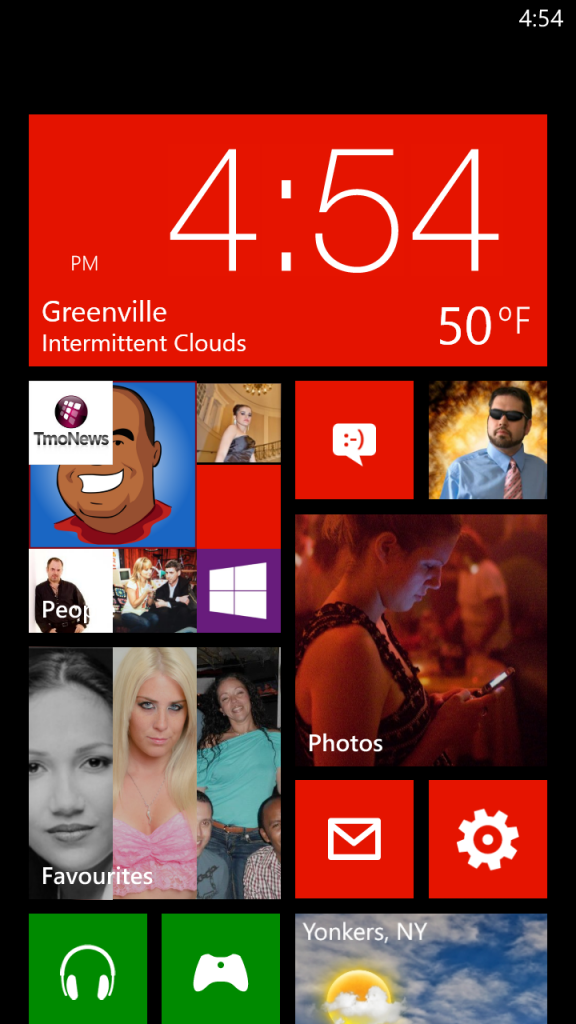 The first big customization is HTC’s new live tile for its HTC Hub.  It now has a nice big clock when you set it to the full width of the start screen.  It shows weather information below that, which automatically updates based on your location throughout the day. 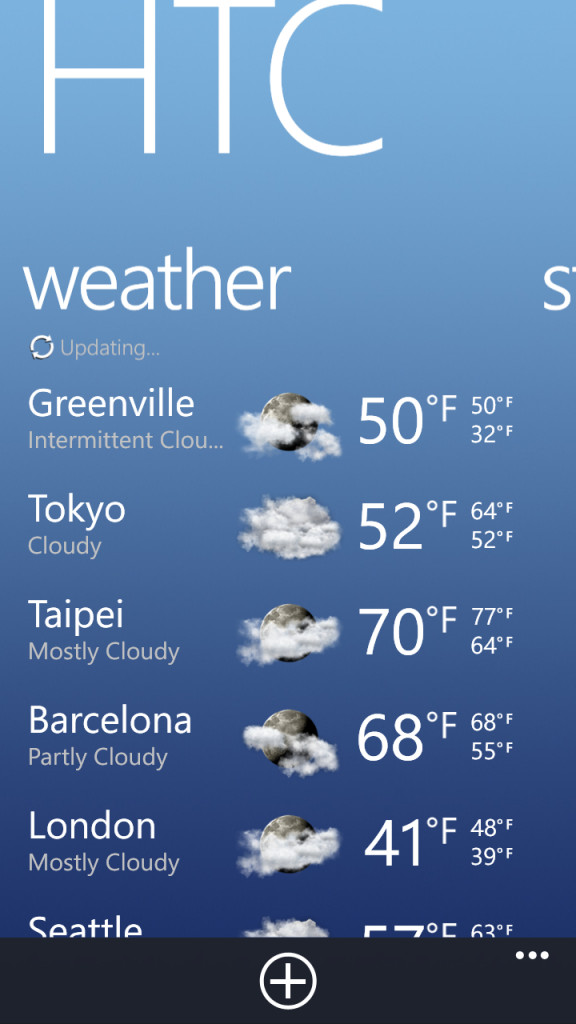 Once you open the HTC hub, you’ll find most of the same features of the previous version, including customizable weather reports, pinable stock quotes and customizable news feeds. 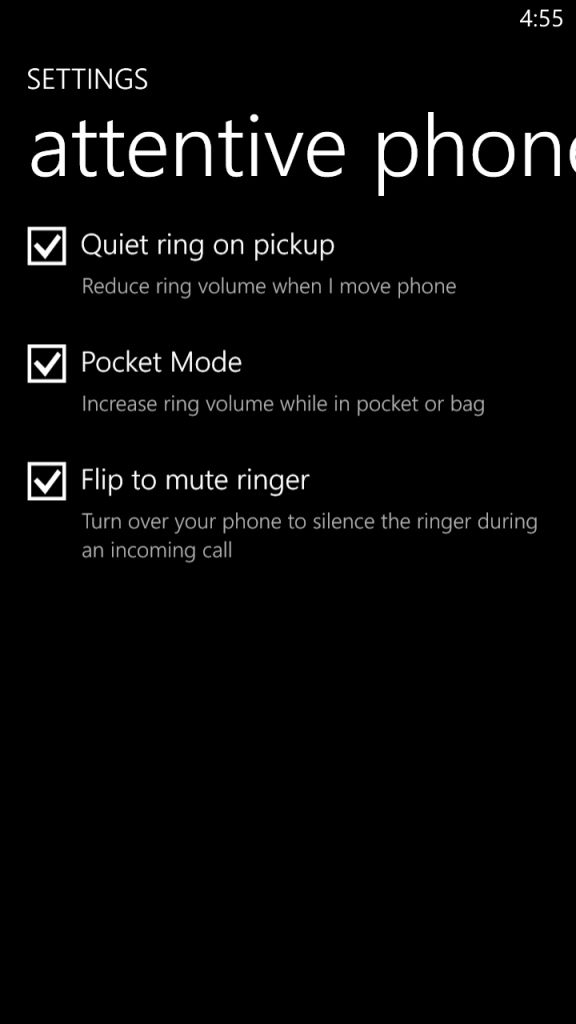 HTC’s “Attentive Phone” features are also available in the Windows Phone 8X.  You can set it to quiet the ring on pickup, increase ring volume when the phone is in your pocket, and mute the ringer when you flip the phone over.

You’ll also find a few custom apps from HTC both bundled with the device and available in HTC’s section of the store. The Flashlight, Photo Enhancer, Units Converter, and Connection Setup apps are all there, however you may notice a lot is missing compared with previous HTC Windows Phones.  The company’s Footprints GPS navigation app is notably missing, but hopefully it will come back soon.

Speaking of missing features, I was disappointed to see that some of HTC’s best camera customization options – the panorama and burst shot modes – are not currently available in the Windows Phone 8X.  HTC is probably working on converting those features to Windows Phone 8’s new camera lenses feature, so hopefully we’ll see those return in an update.

Meanwhile, the camera has seen some other significant improvements.  First of all, it supports 1080p HD video recording now.  Image quality looks great, but the focusing and exposure adjustment changes are a bit slow during recording, and the audio quality is very poor. Even on phone calls, I’ve gotten more complaints about the 8X’s audio quality than with any other phone I’ve used this decade.

Still shots have been improved in the sense that the camera shutter is much faster than any other Windows Phone we’ve tested (so far).  Touch the screen and there’s barely any focus lag before capturing a photo.  Multi-touch zooming is smooth and quick as well.

The front-facing camera has some special additions, too.  It can record video at 1080p HD with its 2.1 megapixel sensor, but one of the things I really like is the still image capture option.  You touch the screen to focus, and if it recognizes that there are faces of people in the frame, a big “3, 2, 1” appears on the screen so that you can recompose your self-portrait before it takes the photo. It’s a really nice touch. 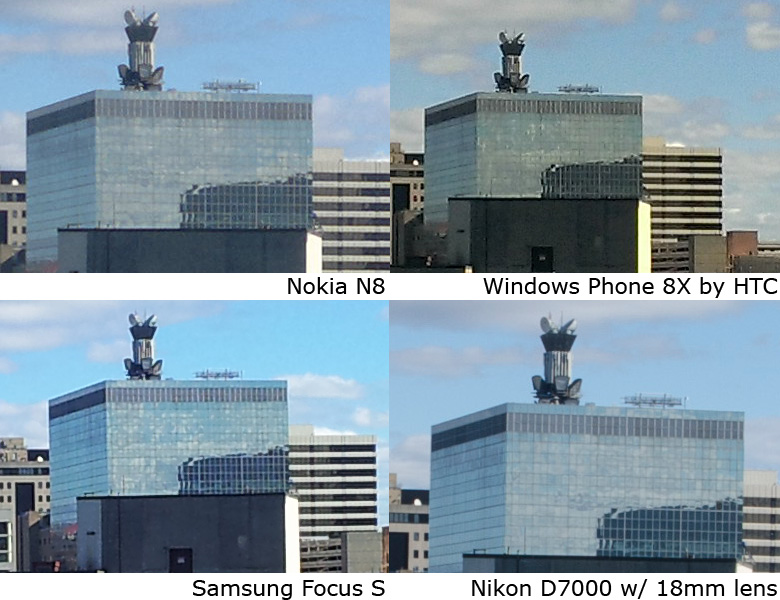 In the above graphic, you can see 100% crop photos of the same scene from a Nokia N8, Windows Phone 8X, Samsung Focus S, and a Nikon D7000 DSLR with an 18mm focal length lens.  You can see that the Windows Phone 8X has a little more noise than the others and its color balance is a bit warmer than it should be.  You can also see some extra sharpening around the edges.  The Samsung Focus S also has some edge sharpening applied, but it’s much more subtle.  The Nikon D7000 and Nokia N8 are awfully close to the real scene and perfect exposure. 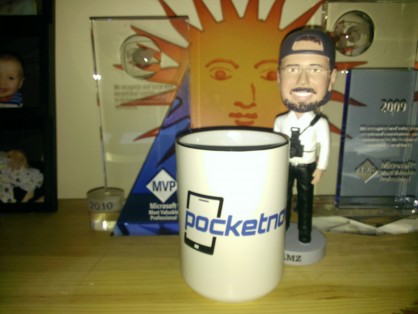 Unfortunately, the Windows Phone 8X camera does not use the LED light for focus assistance.  That means any photos you try to take in complete darkness or otherwise very low light will be very blurry, because the camera will not be able to focus before it takes a shot.

Overall, the Windows Phone 8X camera is going to be quite acceptable for most users.  It’s not the best camera on any phone, but it should handle most snapshots just fine.  As you can see from the above samples, outdoor daylight photos are great, as is the phone’s macro close-up performance.  Low-light with flash is acceptable as long as there’s enough light to focus, and the subject range is close enough.  Other low-light photos either get completely under-exposed or produce huge amounts of noise. 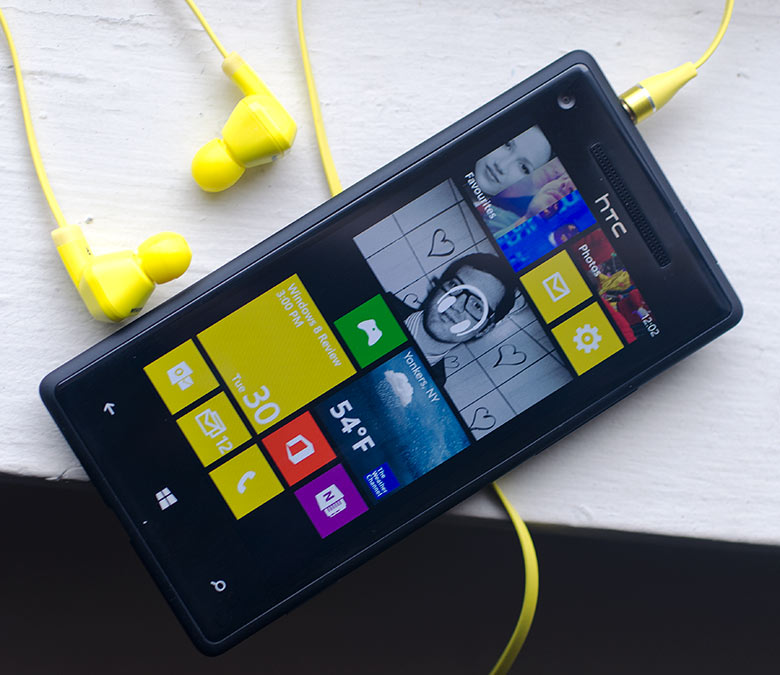 The audio volume on the Windows Phone 8X can get very loud.  It’s fantastic.  When you plug in headphones, it automatically turns on the Beats Audio enhancements.  The included headphones have the flat-style wire and work pretty good, but once we plugged in some iBeats headphones, the audio quality got a lot better (and louder).  We also tried some Monster Purity headphones, which normally we find better than the iBeats headphones, but in this case we think the iBeats brand had better quality. One occasional problem with the audio is that sometimes it doesn’t switch back to the external speakers properly after going out of range and disconnecting from a Bluetooth audio device. 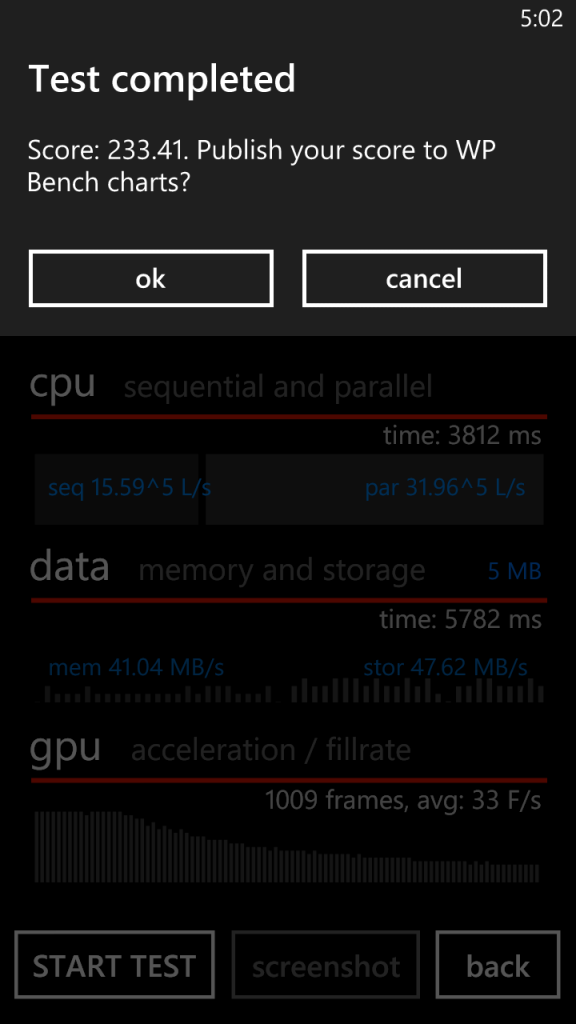 In terms of benchmarks, when we ran WP Bench on the Windows Phone 8X, its score was 233.41.  That’s about 2.5 times better than any of the previous generation of Windows Phones running Windows Phone 7.5.  For the most part, and since previous versions of Windows Phone were already so highly responsive, you won’t notice much in the way of performance improvement.  However, you will notice improvements in things like loading games and resuming apps with the task switching interface.  Previously, those were a couple areas were Windows Phone noticeably lagged, and now there’s much less waiting around.  Third party apps launch a lot faster now as well.  You still have to wait for information to download, but if you have LTE coverage in your area, even that will take less time. 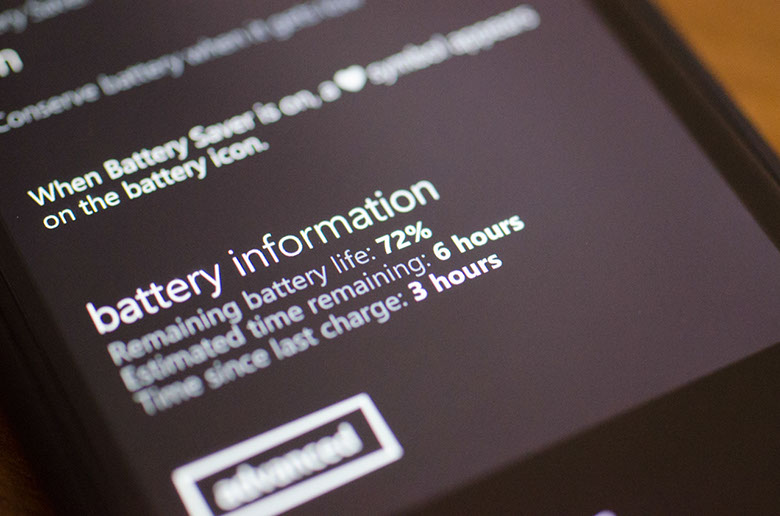 In terms of battery life, I found the Windows Phone 8X to be disappointing.  It does not have a removable battery, so it really needs to last a full day and night for me.  However, after only eight hours it was generally needing a recharge.  This is on the international model that doesn’t support LTE on my network, so I don’t have much faith in battery life.

Call quality was not so great with the Windows Phone 8X.  Sure, I was only using it on EDGE since this is a European version that doesn’t support North American networks, and I was mainly testing it during the aftermath of Hurricane Sandy in New York, but I’ve had more complaints regarding difficulty in hearing my voice on the 8X than with any other phone this decade.  I thought at first it may have been that the way I was holding it could have been covering the microphone hole, but after paying more attention to that, the audio quality was still not good.

Our final rating is going to be a 7.5 out of 10.  The screen, audio amplifier, camera performance, and operating system are pretty impressive, but the pointy edges, poor microphone audio quality and impossible-to-feel hardware buttons can get quite frustrating.  If you’re into great quality music playback, a high resolution screen, a thin form factor and gorgeous design along with some great integration with Microsoft’s ecosystem of Office, Windows, Xbox, Skype, etc., then you should take a good look at the Windows Phone 8X. 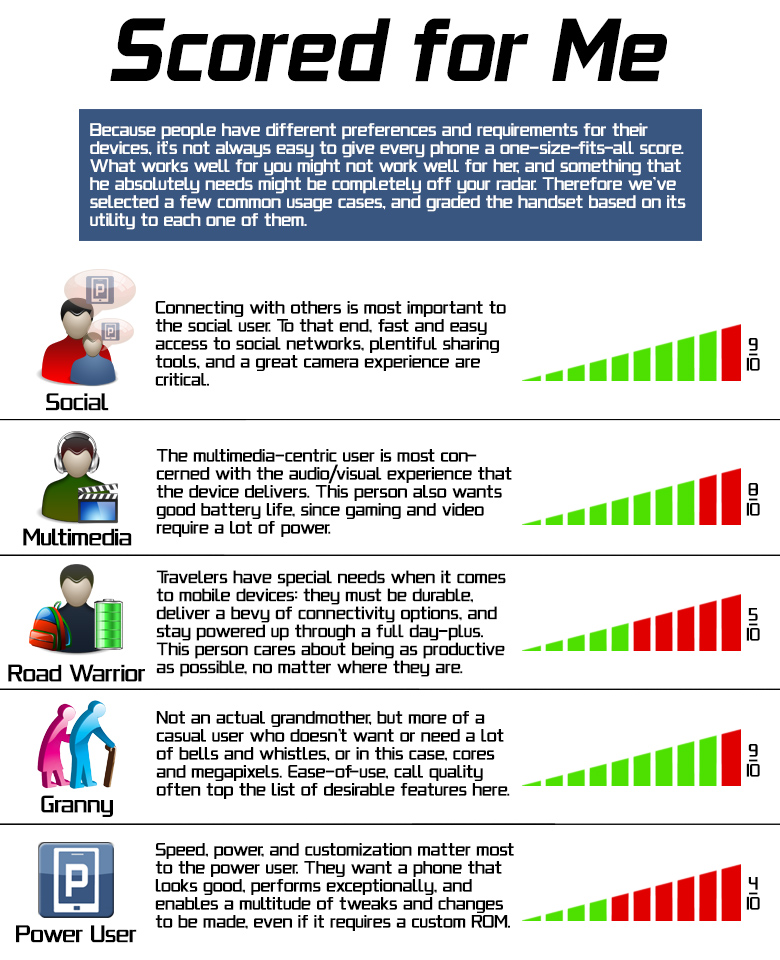 If you can afford it, definitely get one. You won’t be disappointed. Read our Roborock S6 MaxV review to find out why we recommend it.