Believe it or not, the unreleased HTC U12 flagship phone, codenamed Imagine, may have been shown off in public in Taiwan last week.
Published 05 February 2018, 06:58 EST

Something tells us HTC may have reconsidered plans to release just five or six own-brand smartphones in 2018 following the loss of half of its engineering and tech staff. An upper mid-range U11 EYEs is already out with a large 18:9 screen and dual selfie cameras, while a smaller, significantly lower-end “Breeze” could see daylight at the Mobile World Congress later this month instead of a new U12 flagship.

But a next-gen hero device purportedly codenamed “Imagine” has to be around the corner somewhere too, and a mysterious 2Q5W1 mid-ranger was recently seen performing a pre-release speed test. All we know about the latter is it runs Android 8.0 Oreo (already), seemingly packing 3GB RAM and a Snapdragon 625 processor, aka MSM8953.

Believe it or not, a real-life HTC U12 prototype probably made its own first appearance last week, showing how it can (almost) hit 1Gbps cellular download speeds. The Taiwanese OEM took every precaution to hide any distinguishing features from the handset’s front while also covering up its backplate. 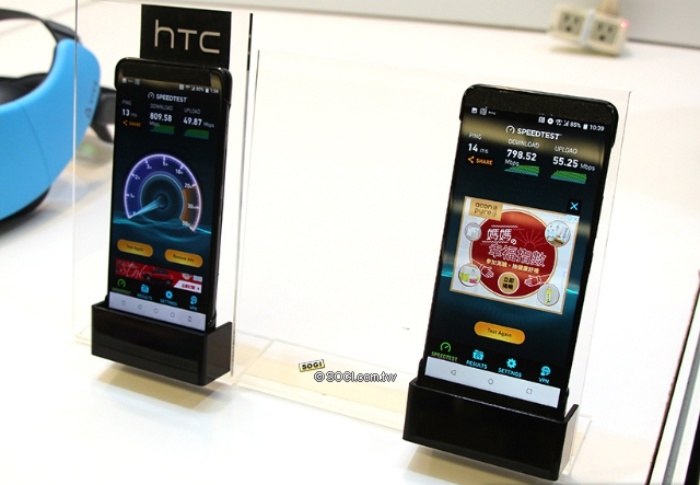 Still, all signs point to this “lightly obfuscated” phone on display at a local 5G industry event following the 2:1 aspect ratio direction of the U11+ with possibly even thinner screen bezels and a similar 6-inch or so size. The U12 name is not set in stone just yet, while that 809.58Mbps download rate can likely only be achieved by a Qualcomm Snapdragon 845 “mobile platform” with an integrated Snapdragon X20 LTE modem.