Benchmarks may have confirmed 6-inch 2:1 screen and Android 8.0 as key HTC U11 Plus specs

We’re only a couple of months away from Christmas, and although HTC is on the verge of losing around half its engineering force, the troubled Taiwanese smartphone manufacturer may still have up to four own-brand devices slated for commercial rollouts by the end of the year.

By far the most exciting of the rumored bunch is the company’s purported first 2:1 flagship with thin screen bezels, going by the somewhat confusing Ocean Master codename and likely to be marketed as the U11 Plus.

All signs seem to point to a domestic November 2 announcement for a handset tipped with a high-resolution 6-inch display, up to 6GB RAM and 128GB internal storage. The key specifications of the HTC U11 Plus appear to have been partially confirmed in pre-release benchmark listings of a mysterious 2Q4D1 device. 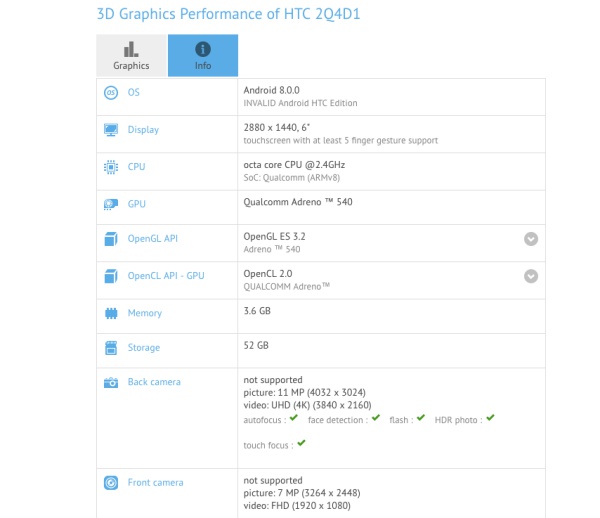 Both Geekbench and GFXBench recorded a variant of this unannounced phone with just 4 gigs of memory and 64GB storage, but that doesn’t necessarily mean it’s the only configuration headed to market.

Other top-shelf features include Android 8.0 Oreo software (already), a Snapdragon 835 SoC with an octa-core Kryo 280 CPU and Adreno 540 GPU, 12MP rear-facing camera, and 8MP selfie shooter. Also, as expected, that extra-large screen should provide 2880 x 1440 resolution with an 18:9 or 2:1 aspect ratio.

Oddly enough, that sounds an awful lot like Google’s hot new Pixel 2 XL, which LG, not HTC, reportedly helped manufacture. Then again, these near-guaranteed HTC U11 Plus specs only represent a marginal upgrade over the “standard”, 5.5-inch U11.