The HTC U Ultra is probably one of the most beautiful smartphones we’ve reviewed in a while, but beauty isn’t everything in tech. Read more in our HTC U Ultra Review
Published 05 April 2017, 07:00 EDTUpdated 10 May 2017, 12:55 EDT

As I sat at HTC’s presentation back in Las Vegas a few months ago, I was immediately drawn at the fact the company chose to call its latest flagship lineup the “U.” See, at least for me, that HTC You Campaign was probably one of the most genius approaches to marketing that I’ve seen in the last decade. The concept that a company “gets you,” and that it builds products focused on you. For a company that’s been struggling to regain popularity in the smartphone space, it only made sense for it to return to the roots that made it popular. The presentation alone was enough to have catch my full attention. We were shown a beautiful smartphone, with a promise of smarter software, all with the purpose of tailoring an experience focused on “You,” the user.

So how about if we factor in the things that we look for in smartphones. You can share your specific desires in the comments, and I’ll begin with mine. I’m looking for an elegant phone, that’s easy to handle, that’s reliable to use, and that provides a great camera and audio experience. For many of you this might be different, but given how much time I travel and commute every day, I value practicality more than anything else. If a company is out to build a product that’s focused on me, I’m sure it noticed these preferences, in addition to the many others that everyone has.

So cue in the HTC U Ultra. We unboxed it, we compared it, and after spending two weeks with it, it’s time for our final verdict. Does it really provide the “Ultra” experience focused on “U?” The answer is actually more complicated than I thought, so let’s discuss the pros and cons. 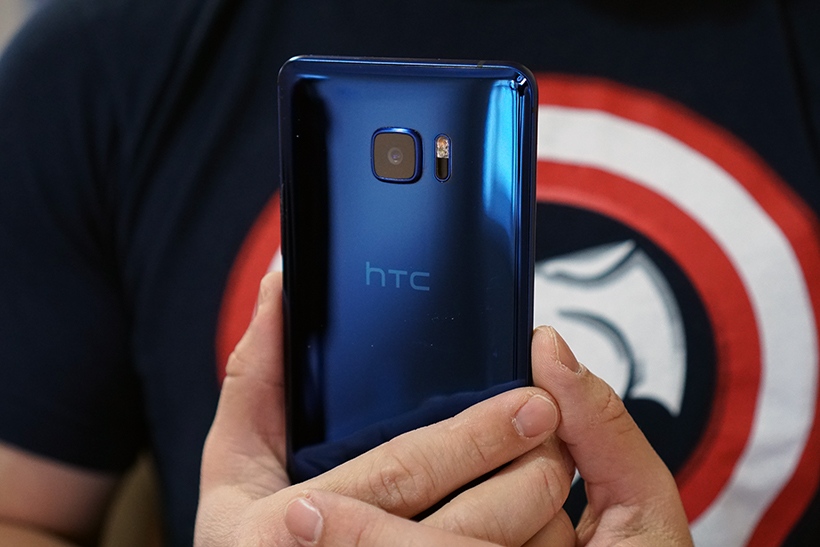 I guess the best analogy that I can think of when it comes to the HTC U Ultra, is to think of the Ford F150 that I owned years ago. I loved that car to death, at least visually. It was large, and in charge. It was powerful, and it was elegant. The HTC U Ultra is probably one of the most beautiful smartphones I’ve ever seen, and if you’re looking for the largest phablet with flagships specs in the market, the HTC U Ultra is your way to go. It also marks HTC’s departure from aluminum, with a new adoption to glass at the back, and trust me, there’s just no way to ignore how reflective this beautiful finish is from a distance.

Now following on with the analogy, not everything was great about my F150. It was a nightmare to park, and all I’ll say is that the 5.8 liter engine didn’t treat me that well. In that same vein, the HTC U Ultra is not a practical phone to handle. At 162.4 x 79.8 x 8 mm, this is literally a two-handed phone, even if your plan is to reach buttons at the bottom of the display. I don’t find the finish to be slippery, which is a plus, but all at the expense of this phone being an odd lint magnet near the camera hump, and fingerprint magnet everywhere else. I highly suggest you use the case bundled in, because falls won’t do this phone well. 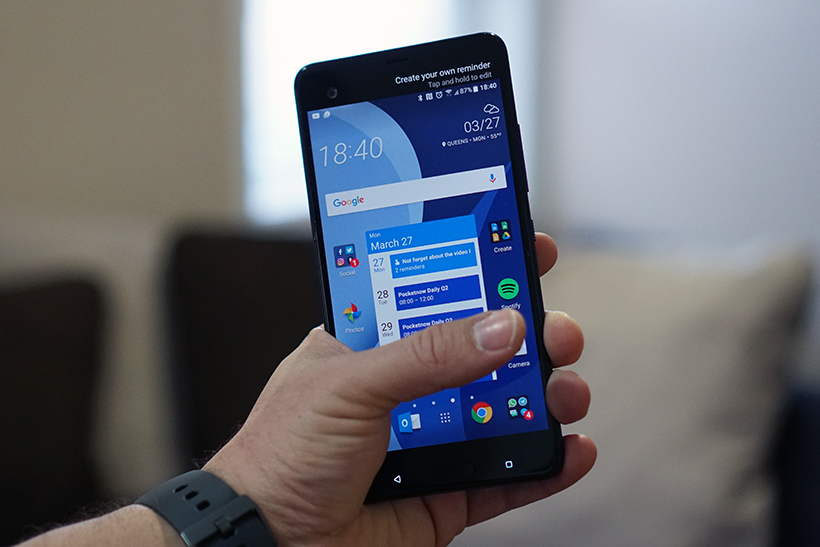 This phone won’t do well in a bezel contest. It’s actually very inefficient at 69% screen to body ratio, but I’m at least happy HTC decided to only launch with black bezels, since that kind of goes away when you fire up the display. This 5.7-inch QUAD HD Super LCD 5 is hands down the one of the best LCD I’ve ever seen. Those fans of AMOLED will be happy to see inky blacks, and an insane punch in reds and blues. Match this with the boom sound Hi-Fi tweeter at the top and woofer at the bottom, and this is seriously an awesome phone for consuming content. I would even go as far as to claim this to be a great phone for gaming, given the added heft of its design.

Many were taken back by the choice in specs, but we can’t be hard on the fact that at the time the phone launched, there weren’t any better ones from an internal standpoint. We have a Snapdragon 821 processor, 4 gigs of RAM, and our unit has 64 gigs of expandable storage, all more than fit for any task in 2017. 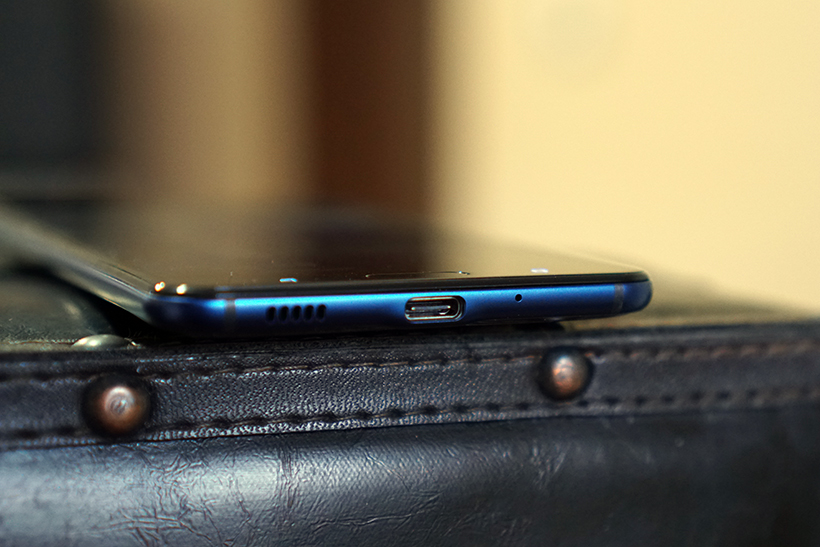 The biggest problem is when you consider that such a large phone is missing 2017 flagship features. WE don’t have IP68 water and dust resistance, there is no wireless charging, and even with the size of this device, there’s not even a headphone jack. It’s also the smallest battery on the largest phablet in the market at 3000 mAh. Sure, Quick Charge 3.0 is here, but great that it is because the fact that this phone still runs Android 7.0 makes it barely last a day given the lack of 7.1 optimizations. 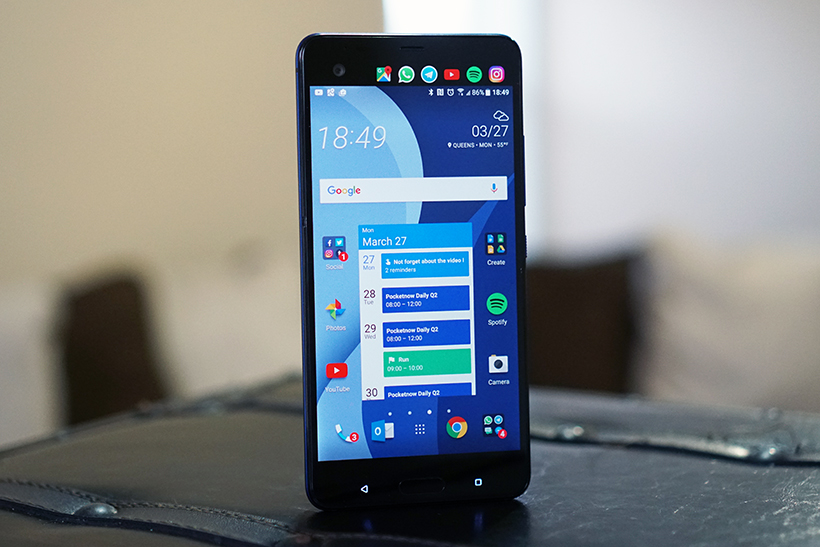 And since we’ve begun discussing software, there are some pros and cons to report here as well. HTC Sense continues to be one of my favorite Android Skins from a visuals perspective. 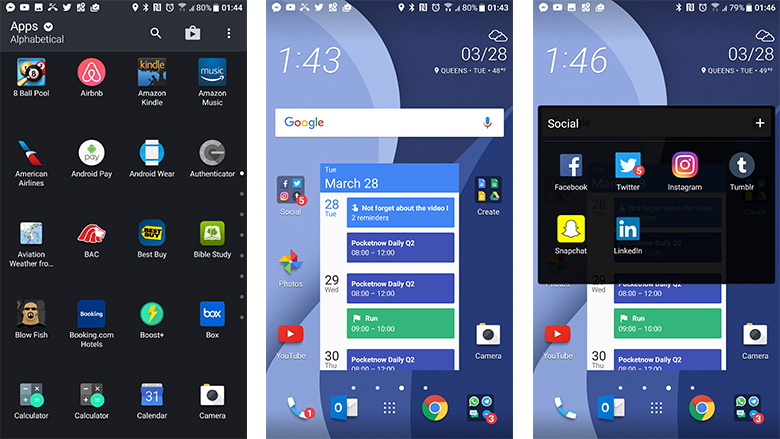 I love the elegant theming options, and how fluid the phone behaves in every task. HTC has managed to match stock Android elements with its famous skin just perfectly, and it continues to avoid duplicating efforts with Google, which I commend, though I notice I have two calculator apps for some odd reason. 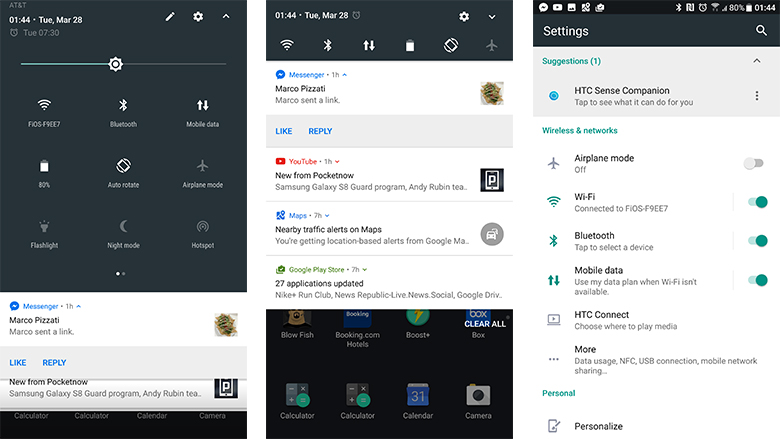 If you notice that I haven’t yet mentioned the secondary display, well, it’s because I’m still trying to figure out its purpose. So remember the whole talk about a phone that is tailored to you? 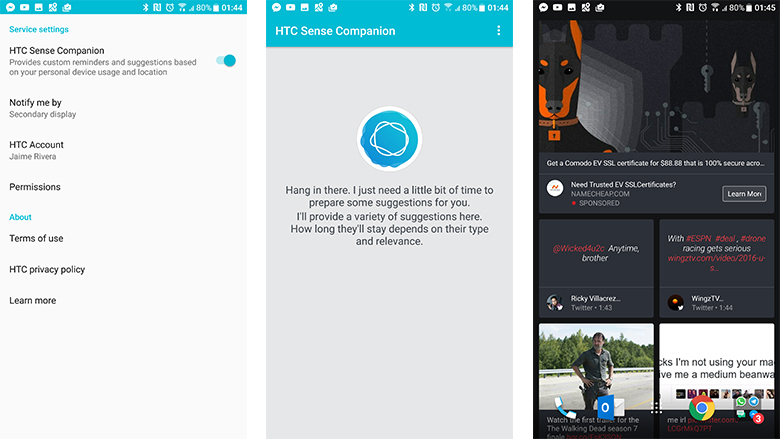 Well HTC told us that its HTC Sense Companion service was designed to bring AI to its apps. The idea is that as the phone learns from your preferences, the secondary display will serve more than just shortcuts, as it would suggest things here as it learns what you do. As it turns out, well the Sense Companion barely arrived at my review unit a few days ago, and it still needs more time to learn from me. I also notice you don’t really need the secondary display to get its alerts. My biggest concern is that this seems to just be another form of suggesting things you can consume, and not really a product that removes chores from you. Like the sponsored ads I find on Blink Feed all the time, and that really irritate me, I’m actually disappointed over my scarce time with it. 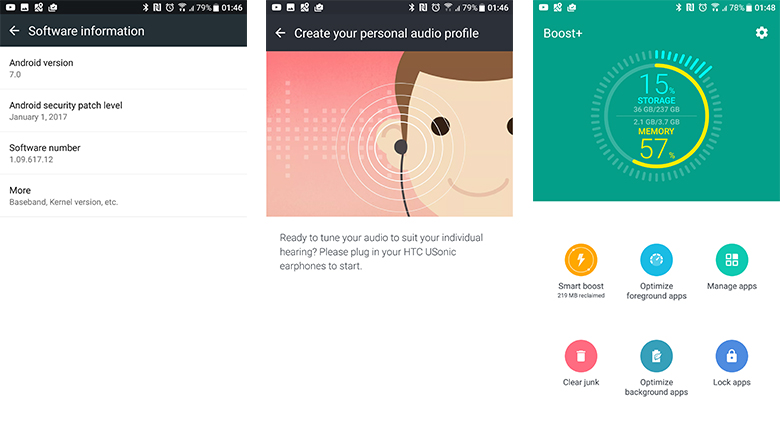 HTC includes certain extras that I do praise, like the case of its U Sonic software to tailor music to your ambient noise, or its Boost+ service, which not only helps you optimize the phone’s performance, but also helps you lock apps with your fingerprint. 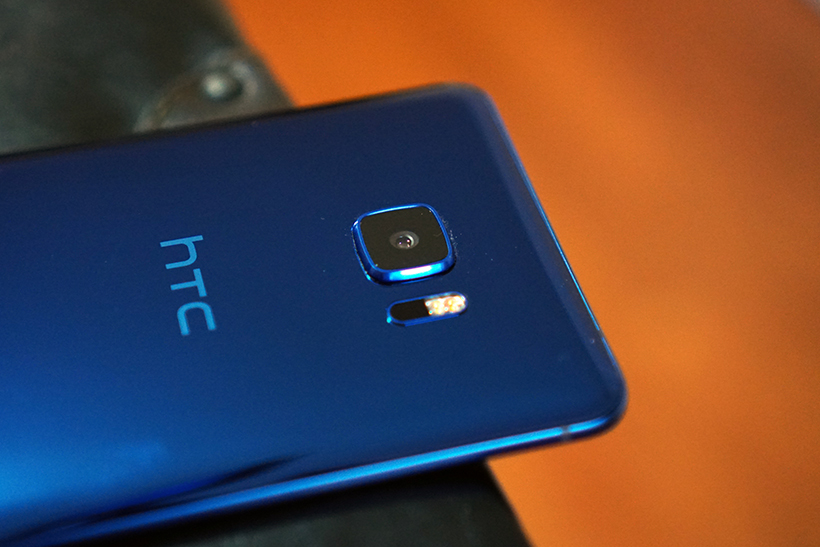 A major high point of this phone is HTC’s choice for cameras. It seems that the company has finally figured out how to deliver a great camera, because there is no other way to describe it. We have a 12 ultrapixel shooter with 1.55 microns on the sensor, OIS, and f1.8 aperture. I’m just in love with how this phone handles bokeh and macro shots, and the insane color saturation and detail.

I also love that it’s a solid performer in low light, and this whole approach to the selfie, where you can take advantage of 4 ultra pixels when you want or 16 megapixels when you don’t.

And if video is your thing, you’ll also fall in love with the stabilization, in addition to the 3D spacial audio. 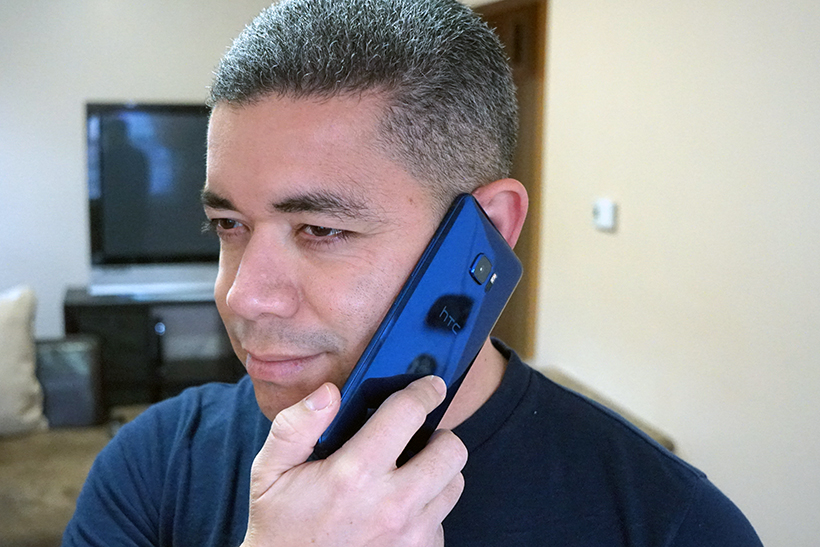 I’ve spent at least two weeks with the HTC U Ultra. In pretty much every task I throw at it, it behaves like a flagship should. Great responsiveness in the user interface, great speed at launching games and playing them. Really, I can’t say anyone would ever complain about using this phone for absolutely any need at hand. I’ve also fallen in ove with HTC’s U Sonic software that tailors earphone audio to your surroundings with the push of a button, and in basics like call quality and data speeds, you won’t have anything to complain about.

Now since what I value most is practicality, I have to admit this is not my favorite phone. As I mentioned earlier, handling it is a pain, and other essentials like battery life are regular at best. There was a time when people would buy phablets because they lacked compromise, but this is the complete opposite of that. 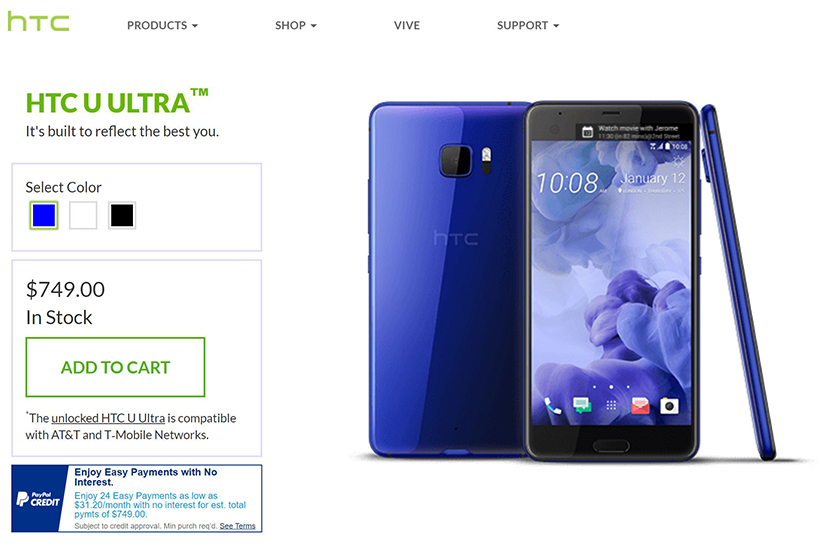 Here’s where this review goes down the drain. So you have a beautiful phone that lacks essentials for any flagship in 2017, and yet the price tag is not attractive at all. The HTC U Ultra can be had unlocked for a whopping $750 in the US. Sure, you start at 64GB of storage, so this is on par with devices like the iPhone 7 Plus and the Samsung Galaxy S7 edge, but these two devices that launched in 2016 sport better features than the HTC U Ultra for the same amount of money. 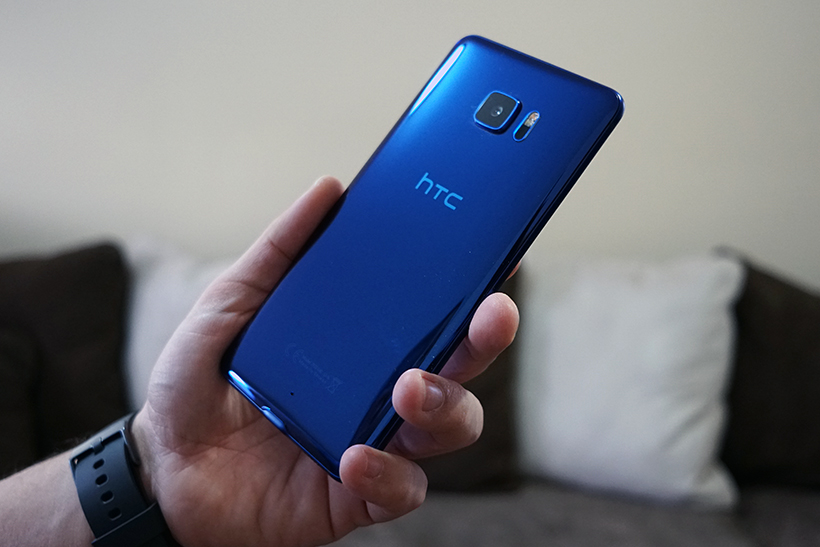 Overall, we’ve tried to be as objective as we can with this review. On its own, the HTC U Ultra is a gorgeous device, with one of the best screens I’ve used, and an awesome camera combo..

Sadly the problem is that it doesn’t live on its own. For a whopping $750, you don’t have water resistance, its design is larger than the newest competitors, and all the while dropping essentials like a headphone jack. There’s this whole argument of AI being essential to this phone, but as it stands, e haven’t been able to prove if this is actually useful or not.

For die hard HTC fans this will be the most beautiful HTC 10 you can buy, and I actually didn’t get the name of the device wrong. This is sadly an HTC 10 covered in another shell. It’s as beautiful as can be, but sadly too late to make headlines in 2017.

Today, Xiaomi announced that the upcoming Xiaomi 11T and 11T Pro will receive 3 years of Android OS updates, and 4 years of security patches.

This article describes the major changes Samsung’s foldables have seen over the last two years and how the Z Fold 3 might be the right device to help jump ship into the world of foldables.