The upcoming flagship phone formerly known as Ocean and now expected to be called HTC U almost certainly packs an SD835 SoC and 3000mAh battery.

Not that we had any reason to doubt Evan Blass of @evleaks and VentureBeat fame after reliably exposing so many unreleased phones, including the Galaxy S8 and S8+ most recently, but if you needed more proof the HTC U, aka Ocean, is indeed right around the corner, AnTuTu lends the rumor further credence.

That still sounds awfully similar to the recently launched U Ultra, save for a substantially upgraded Qualcomm processor, and most likely, a slightly smaller display with the same 2560 x 1440 pixel count and improved resulting density. 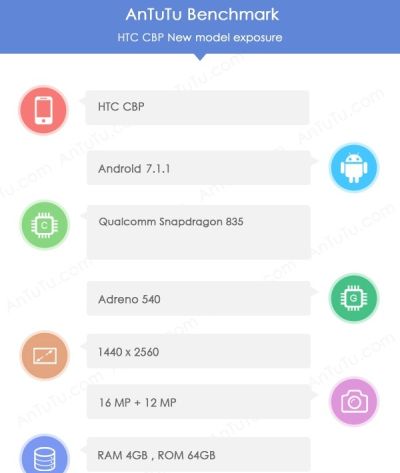 Of course, the absolute highlight of the HTC U, which may still be called HTC 11 to minimize 2017 branding confusion, is reportedly a groundbreaking technology dubbed Edge Sense, allowing users to customize gestures for various actions and ways of interaction.

Lastly, we’re hearing from another fairly credible source that HTC Ocean (HTC U) battery capacity will be “equal to 3000mAh.” Bizarre wording aside, the number isn’t too bad, since the larger U Ultra also packs a 3000mAh cell.